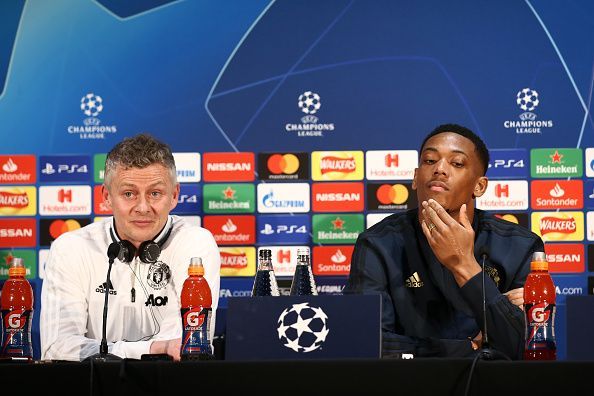 Manchester United boss Ole Gunnar Solskjaer had his press conference today, ahead of the Champions League round of 16 clash against Paris Saint-Germain.

The Norwegian is preparing himself for his first Champions League game as Manchester United manager. Ole believes that the tie against the French champions comes in perfect period for the Red Devils.


We’ve given ourselves the best possible opportunity because of the way we’ve come into this game. We’re confident and we’re looking like a team. If there was ever a time to go into big games, it’s now.


I think the squad is very capable of winning against any opponent. When we go into games confident as we are now, in form, we are looking forward to the game.

We can’t look too far ahead, we’ve got to look at PSG now and make sure we go through and take the next challenge as it comes. But I’ve been very pleased with the attitude. I’ve said to the boys, we have to keep working every single day.

When we work hard, we work hard. When we have lighter training, we concentrate. Then we can improve and maybe surprise people.

PSG will begin the game on Old Trafford without two of their best players – Neymar Jr. and Edinson Cavani due to injury. Our manager has had his view on their absents and said:

Of course any team that is missing players like Neymar, Cavani and Meunier will feel the effect.

But it gives other players a chance and maybe they are more unpredictable for us with who they are going to play.

When you’ve seen that front three for the whole season you know what to expect but this time around we’re guessing a little bit.

After the game against Paris Saint-Germain, Manchester United go away to Chelsea in the FA Cup and welcome Liverpool on Old Trafford. It has been reported that Solskjaer’s possible long term contract may depend on the results of these games, but the (interim) manager didn’t want to comment on those reports.

You need to change the script soon, because you have so many ways of asking that question!

There are still a few more months left of this season for me to do whatever I can for the club.