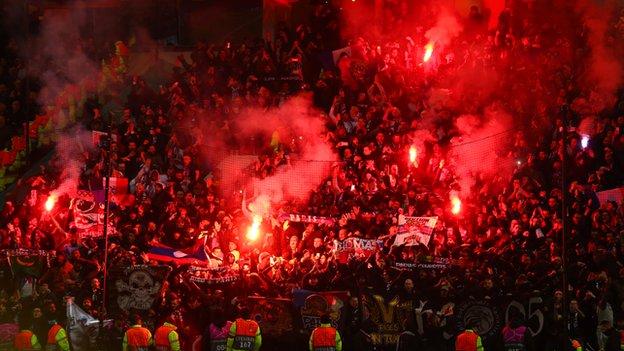 United and PSG charged by UEFA

Manchester United and Paris Saint-Germain have been charged by UEFA for incidents during Tuesday’s last-16 first leg at Old Trafford.

The game finished 2-0 to PSG on Tuesday night and it was not a clean game itself. The players saw 9 yellow cards and one red, as Paul Pogba got himself sent off before the end of the game. Manchester United’s best player will miss the second leg in Paris in March, which is another big blow, along with the bad result.

The tension from the pitch has been transfered to the crowd as the fans of both teams were not behaving on Old Trafford.

United will face two charges: throwing objects during the game by the fans and blocking of stairways.

Former United winger Angel Di Maria had a bottle thrown at him during the match on his first return to Old Trafford since leaving for PSG in 2015. He responded picking up the beer bottle and made a gesture as he was going to drink it.

He didn’t have a great reunion with his former team mates too. With the ball rolling out for a throw-in, Ashley Young barged into his back, sending him flying into the hoardings via the steep slope that frames Old Trafford’s pitch.

Di Maria, of course, made the most of it and held a seemingly injured arm as his team-mates surrounded Italian referee Daniele Orsato in a desperate attempt to force a second booking on Young.

No yellow came, but the stick kept coming. He cupped his ears to his former supporters as play resumed, and that seemed to bring the 30-year-old to life.

Di Maria had another incident with the fans as yelled at them “f*ck off” after assisting Kimpembe’s goal from a corner kick. The Argentinian played a great game as he assisted Mbappe’s goal as well.

PSG have been charged with the setting off of fireworks, throwing of objects, acts of damages and crowd disturbance.

As Sky Sports News reports, around 800 seats were damaged in the away end, while the netting that protects the disabled fans in front of the away section was ripped off.

PSG’s fans are said to have smuggled flares into the ground with one fan understood to have suffered hand injuries as a result of the pyrotechnics.