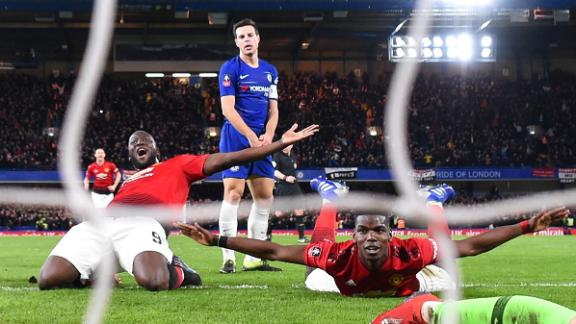 Paul Pogba was Manchester United’s top man in the 2-0 away victory over Chelsea on Monday night, sending his team to the quarter-finals of the FA Cup.

The Frenchman was a bit quiet in the first 20 minutes of the game, but then he became unstoppable. Pogba put a perfect cross in Chelsea’s box in the 31st minute and Ander Herrera with a clinical finish put the Red Devils in a one goal lead.

Paul scored the second himself in the last minute of the first half. He used Marcus Rashford’s cross and headed the ball past Kepa Arrizabalaga.

Manchester United won the game and went through to the quarter-finals of the FA Cup.

Pogba in a post-match interview with MUTV admitted that is still hurting from last season’s lack of silverware and said that Man United “want to win something” this season.


Losing a game after 11 games without losing hurts and it’s a really bad feeling, so you don’t want this to happen again. All the competitions are important. We want to win something.

Last year we didn’t win any trophies. I still remember that. This year we want to win something.

The FA Cup may be the only trophy that Manchester United has a real chance to win. The Red Devils will face Wolverhampton away in the quarter final, which won’t be an easy game.

Manchester City is the only serious opponent left in the cup, and as they would chase the Premier League and their first European crown, they might just don’t pay too much attention to the FA Cup.

United is still alive in the Champions League as well, but with the 2-0 home defeat to PSG the chances for progress in the next round seem to a very small.

Paul Pogba was sent off in the 90th minute against the French Champions and he won’t travel to Paris for the second leg, due to susspension.

However, we think that the FA Cup might be enough, as Manchester United had the worst start of a season in the past 25 years. The Red Devils were 11 points behind Chelsea when Ole Gunnar Solskjaer took over control of the club.

The Norwegian managed to get the team in top four and if he finishes in a Champions League spot and wins the FA Cup for the club, it would be an astonishing achievement.