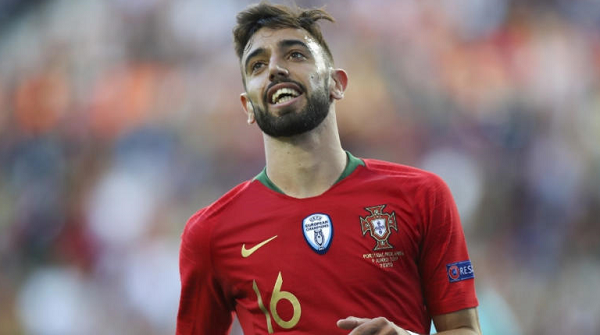 In another turn of events, Manchester United are now up against Tottenham Hotspur to secure the services of midfield sensation Bruno Fernandes from Sporting Lisbon. The Portuguese player has been on the radar for sometime now after having an incredible season at the Lisbon team.

The player is in high demand and Spurs officials have reportedly sent a team of officials and to try and agree a deal with the club. The player scored over 30 goals in the season and was a standout of the league. Reports from Portugal state that they are holding out for close to £55 million for the player and won’t accept anything less. As we reported a while ago, the player has agreed terms with United but the negotiations rely on the transfer fee. Sporting President Frederico Varandas is known to stay firm for prices on players and fans will be hoping Manchester United make a formal bid soon.

If Manchester United lose out to Bruno to Spurs and we don’t make anymore midfield purchases then this will be a blow to the team and OGS.

If Manchester United lose out to Bruno to Spurs and we don’t make anymore midfield purchases then this will be a blow to the team and OGS. Whilst the team is not built on one player, midfield needs additional high quality players. If Paul Pogba stays, as we think he will do then an addition of Bruno would mean one of the best pairings in the Premier League. If he does’t sign then the midfield is not as strong as other teams.  We believe the officials at Old Trafford should act fast and get the player to the team.

If United are to challenge for all trophies this year then we need to be signing players of this quality, even if that does mean paying more than the market value or our rivals. Harry Maguire is another player that is wanted by all the major teams, his signature could be forthcoming next week but also could sign for our closest rivals, Manchester City.

What do you think? Are we are Truly Reds over exaggerating the fact that if we lose the race to sign Bruno that it would have negative impact at the club.  This week we have been linked with a swap for Romelu Lukaku and Juventus striker Paulo Dybala; Harry Maguire, Gareth Bale and Newcastle United’s Sean Longstaff. Truly Reds will be ready to confirm immediate signings and let you know. Remember to like our Facebook page and follow us on Twitter.