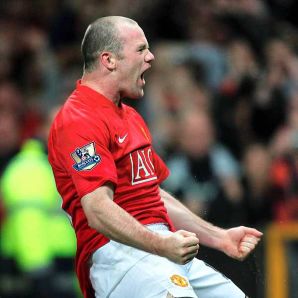 Manchester United are playing their postponed Premier League game against Fulham tomorrow at Old Trafford. If the lads win the game, they will stay in top with five points different between them and Liverpool.

Wayne Rooney will return to the bench for Manchester United tomorrow for the first time since he got injured during Everton game last month.

Sir Alex Ferguson opted to leave him from the squad on Sunday FA Cup trip to Derby, a decision that was a wise one.

It allowed Rooney to get extra day training under his belt to ensure that he plays a part against Roy Hodgson’s men, even it is expected that Sir Alex starts the game with Carlos Tevez and Dimitar Berbatov up front.

“The plan is for Wayne Rooney to be involved tomorrow night and he will start on the bench,” Ferguson told Key103.
“We have handled him in the right way.
“He is training now. His performances have been excellent and he is back to his best.
“The decision not to involve him on Sunday was a good one because he was able to train and that extra day has brought him on a lot.”
Rio Ferdinand, Nemanja Vidic, Carlos Tevez, Michael Carrick and Dimitar Berbatov is one of the big names returning after the FA Cup win at Derby, without forgetting Edwin van der Sar who has an incredible 14th consecutive Premier League clean sheets.