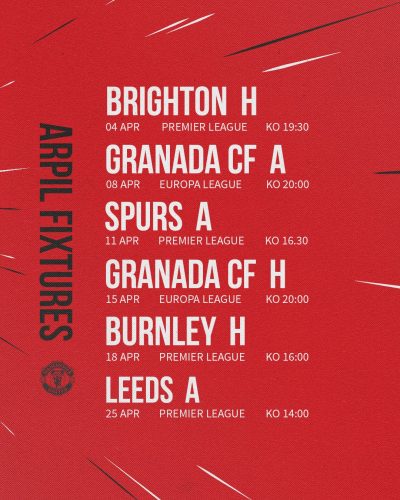 Today sees the return of the Premier League after the International break with the Reds looking to continue the form and gaining three points in the first game of April.

In what should be a comfortable game for Ole Gunnar Solskjaer’s team, the first game back is at home against Brighton.  There are injuries to Anthony Martial who suffered a knee problem for France and also doubt over Victor Lindelof, who missed Sweden’s final match of the break. Aside from these, the team sheet should be a strong one ready for the game.

Granada CF beat Napoli in the last round in what was a surprise and will be confident going into the game against Manchester United. Whilst Paul Pogba helped the reds beat AC Milan in the last round, this game should be a difficult game.

An intriguing game against former manager Jose Mourinho. With the last game against Spurs being a 6-1 loss, the players will be looking to get revenge and get the three points.

Manchester United will be looking for three points in this game to ensure the push for Champions League position.

A game against Leeds United is unlike many others in the Premier League. Whilst the fans won’t be in the stadium, the players from both sides will understand the importance of the win for the supporters. The rivalry is one of the biggest of the English top flight and one in which fans from both sides will be looking forward to it. If Manchester United can withhold and almost certain strong first period from Leeds, the quality of players on the team should be enough to win.

What are your thoughts on the fixtures this month, can we win all of them, which is the most difficult, Granada, Spurs, Leeds or even Burnley? Next season could be a trophy-filled one, read our article here.