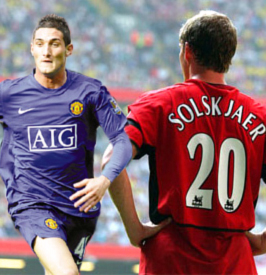 Italian sensation Federico Macheda has certainly made a name for himself – emerging from the bench in back to back games to earn Manchester United a crucial six points in games against Aston Villa and Manchester United respectively. Already, he has drawn comparisons with one of the most popular strikers to wear the Man Utd shirt in the past decade – Ole Gunnar Solskjaer.

The Norwegian‘s impact from the bench was unquestionable and he quickly became a legendary figure with the Old Trafford faithful as he scored vital goal after vital goal to earn United a string of honours, most notably the European Cup in 1999 in THAT final against Bayern Munich. Solskjaer will be forever remembered as a United legend and it is fair to say he has never been properly replaced since injury forced his retirement.

To compare Macheda to Solskjaer after just two games is premature, but the youngster has certainly made an impact in his early United days. What is safe to say is that were it not for his contribution against Villa, United would likely be trailing Liverpool in the race for the Premiership title, albeit with a game in hand.

Prior to his introduction against Villa, only the most diehard United fan had even heard of Macheda. One curl from his right boot past a despairing Brad Friedel later and the kid, signed from Lazio, was making football news headlines all over the world.

It’s important not to put too much pressure on the Italian, although that is inevitable given the impact he has made. The one thing that works in his favour is that in Sir Alex Ferguson, he has a manager who is second to none at nurturing young talent. Having managed David Beckham as a youngster, he is better equipped than any other manager to turn Macheda into a star.

United fans will be clamouring to see more of the Italian, but a start against Porto is unlikely. While he is an undoubted talent, with a UEFA Champions League semi-final at stake, Ferguson is likely to go with the more experienced Dimitar Berbatov in attack, alongside Carlos Tevez or Wayne Rooney.

Should United need a goal however?  Don’t be surprised to see Solskjaer Macheda take the field.

Written for Truly Reds by Stuart Halliday, a professional sports writer who blogs about football news.