Old Trafford has been the home of numerous football legends over the years but if the Holy Trinity statue of  George Best, Denis Law and Bobby Charlton standing outside the famous ground ever needed a fourth member to complete The Four Musketeers, you can be certain that the leading candidate will be none other than their sixties team mate Pat (Paddy) Crerand.

The cultured midfielder – maybe that should be half  back or wing half as they were called in those days, was the ‘heartbeat of the team’ making 397 senior appearances for the club during nine seasons between 1962 and 1972 and was the unsung hero of that memorable team which was so patiently built by Sir Matt Busby. In his time, Crerand won two championship winners medals and lifted both the FA Cup and the European Cup. 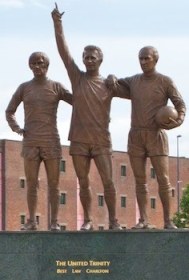 He was a typical hard tackling Scot who, while known for his tenacity was also an accurate passer creating the opportunities for the likes of Bobby Charlton, George Best and Denis Law. It was said more than once that while United had the holy trinity, an in form Paddy was the heartbeat of the team. The common saying amongst Manchester United fans was that “If Pat Crerand plays well, United play well”

Although Paddy was a first team regular at Celtic, he was forced to play second fiddle to fierce rivals Glasgow Rangers which dominated Scottish football at the time. He managed to raise quite a few eyebrows however when he became a close friend of  Ibrox hero Slim Jim Baxter, a protestant who was widely known for his hard drinking.

Born in Glasgow in 1939, the 16 time capped Scotland international came from an Irish background with his parents moving to Glasgow from Donegal in Ireland. The story goes that Crerand had a meeting with key members of the IRA in Derry back in the 1970’s where he simply told them that the only way of solving their problems was by dialogue not by shooting each other.

After spending six years at Celtic, a 23 year old Crerand signed for United on 6 February 1963 which also happened to be the fifth anniversary of the Munich air tragedy for £56,000, made his debut against Blackpool then helped United win the FA Cup three months later. His greatest night of course was the one at Wembley Stadium in 1968 when United became the first English club to win the European Cup – just ten years after the team was decimated.

Crerand hung up his boots in 1972, eventually becoming assistant manager to Tommy Docherty and has remained a regular feature at the Theatre Of Dreams for the last 47 years. Glazers may come, Edwardses may go, but Crerand remains, steadfast, devoted, loyal to the point of obsession, a man who is as passionate to the cause now as he was the day he stepped out at Old Trafford.