In the eyes of most football fans, Manchester United’s Premier League visit to Fulham on Sunday is by no means a blockbuster yet there was a time 52 years ago when two meetings between the clubs had the whole nation gripped by their drama. “The Cottagers” were a second division club which finished the 1957-58 season in fifth position while United was still struggling with the tragedy which had decimated their team just six weeks earlier. Yet they produced 12 goals between them in two pulsating FA Cup semi final meetings.

In the eyes of most football fans, Manchester United’s Premier League visit to Fulham on Sunday is by no means a blockbuster yet there was a time 52 years ago when two meetings between the clubs had the whole nation gripped by their drama. “The Cottagers” were a second division club which finished the 1957-58 season in fifth position while United was still struggling with the tragedy which had decimated their team just six weeks earlier. Yet they produced 12 goals between them in two pulsating FA Cup semi final meetings.

United were riding on a wave of emotion, having captured the affection of the nation. Virtually the entire county was behind them, willing them to win the cup for the Babes. With manager Matt Busby on a life support system in a Munich hospital, assistant Jimmy Murphy had somehow cobbled together a team for the fifth round against Sheffield Wednesday only 13 days after the tragedy. The FA allowed him to field “cup-tied” players and he signed Ernie Taylor from Blackpool to add experience to the combination of reserves and juniors.

Harry Gregg, the regular United goalkeeper, only knew three players in the line up. The match programme had a blank page for the United team sheet. Stan Crowther was at left half, having signed for the club 30 minutes before kick off. The Aston Villa manager Eric Houghton knew a desperate United were interested in Crowther and persuaded him to go along and watch. When Houghton and his player got to Old Trafford, he suggested that Crowther help out United, but the midfielder said he had no kit. The manager had secretly brought Crowther’s boots in his bag so he duly signed. 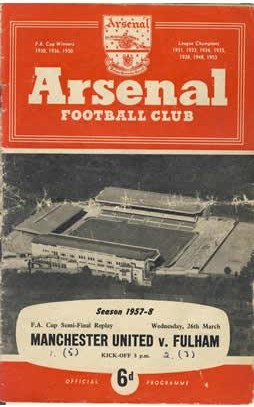 A crowd of 60,000 saw Shay Brennan, the reserve right full back playing on the left wing, scored twice and Alex Dawson, a Scottish teenager, completed the night with a third goal in the 3-0 victory. It was Boy’s Own stuff. Albert Quixall, a Wednesday player who later moved to Old Trafford said “United ran their hearts out and no matter how well we had played they would have beaten us. We were playing against more than 11 players, we were playing against 60,000 fans as well.”

The sixth round took United to West Bromwich Albion whose manager Vic Buckingham said before the match “United are a wonderful side but we can have no sympathy. We will beat them 6-0.” Still a rag tag team, United led 2-1 through Taylor and Dawson. West Brom equalised four minutes from the end and took the tie to a replay at Old Trafford. Bobby Charlton, United’s young midfielder had recovered sufficiently from his injuries in Munich to play. United again showed spirit and in the final minute Colin Webster sealed their winner. The sea of emotion was rising, United were in the semi finals against Second Division Fulham at Villa Park.

There were 70,000 for the match at Villa Park on March 22. Fulham’s Jimmy Hill had scored in every round but recalls that United were favourites. “There was a feeling that they were superior anyway and that it was us who had to do something extremely special to knock them out” he said “football is such a mental thing. Because of the circumstances of the fixture, because of maybe the manager saying the right thing at the right time, you can have the players so heated up that they will beat anybody.”

Charlton was in his stride and opened the scoring. Fulham equalised. Then a pinpoint pass from Roy Dwight, the cousin of singer Elton John, put Hill through to give Fulham a 2-1 lead. Charlton scored again in the 2-2 draw. To Highbury for the replay four days later and United led 3-0. Fulham came back to 4-3 down but Johnny Haynes had an equaliser disallowed. Instead, United went on to win 5-3. Dawson hit a hat trick and the boys in red were on their way to Wembley. Manchester United had somehow reached the final despite losing 9 first team players in the Munich air disaster.

David Meek, a young sportswriter on the Manchester Evening News at the time, watched United’s remarkable run. “The big issue was whether they would resign from the FA Cup or maybe didn’t have the heart to carry on” he said “when it became apparent that the club was not going to go under, it appealed to the nation and people felt they were supporting the underdog. The cup lit up their imagination.”

A year earlier, Busby’s Babes had tried in vain to become the first team of the century to achieve the League and FA Cup double and their return trip to Wembley saw the whole of Britain cheering United on. Bolton proved too strong however, as did their desire not to be overwhelmed by public opinion Nat Lofthouse gave Bolton a dream start when he fired home inside three minutes and a heavy end of season fixture backlog clearly took its toll on United.

Bolton clinched victory on 55 minutes with one of the most controversial cup final goals ever. Lofthouse, his left elbow extended, bundled United goalkeeper Harry Gregg and the ball into the back of the net, leaving Gregg requiring lengthy treatment – and Lofthouse to pick up the cup.

“The final was a match too far” says Meek “United had run out of emotional steam. Bolton were very determined. They had their own agenda. The other teams were caught up in the Munich emotion but they were grittier. They were another local club and maybe felt under the shadow. They were not going to do what everybody expected, to bend the knee and lose. It’s like a family. Brothers can be harsher on each other than others.”

We all live in a totally different world in 2010 to that of 1958 and football is no different. There is one man who has managed to remain a constant during those years however. Bobby Charlton got both United goals in that 2-2 draw with Fulham in the first semi final and is still a director of Manchester United today.

For four months Tony Macedo, 20, has been a great giant of a goalkeeper for Fulham. And for four months he h a s h a d a secret nagging nightmare worry: “When am I going to have that bad game, that day when the dives are a fraction late, when the position sense goes haywire, when the hands grab but don’t grip?”

Now he knows the tragic unhappy answer. It happened yesterday at Highbury in the most important game he’s played – the F.A. semi final replay. It saw Fulham out of the Cup and the rebuilt Manchester United back at Wembley. Macedo made a brilliant start, twice in ten minutes snapping like a hungry twisting shark to save shots from Manchester. 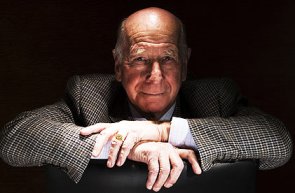 Then with the sudden drama of a fight night knock out, he crumbled, cracked, dissolved and disappeared. He just wasn’t there when United got their first goal through centre forward Alex Dawson – Kid Cudgel, in the fourteenth minute. Macedo was stranded somewhere out beyond the near post when outside right Colin Webster resisted a Stapleton tackle and pushed the ball over at thigh height for Dawson to make a battering ram dive and score.

Macedo got both hands to the shot big Alex hit at him from the edge of the penalty area in the thirty fourth minute, then let it spin out in a lazy arc over the line. And he committed the unforgivable sin of goalkeeping just before halftime. He won the race to reach a penalty area ball THEN TOOK HIS EYE. OFF IT in the thundering diversion of challenge from Dawson and outside left Brennan.

Brennan got it and slipped it into an empty net. That made it 3-2 to United. Twice they had built up a lead. Twice fighting Fulham snatched it away. Centre forward Arthur Stevens had made it 1-1 in the twenty seventh minute from a sweet pass from Haynes.

Outside left Trevor Chamberlain had made it 2-2 when left back Jim Langley charged upfield and put the ball across. Could they do it again? The longer it went, the more doubtful it looked. I thought it was all over when Charlton schemed the best goal of the game in the sixty fifth minute with a run down the left, a feint to the right, a swerve that beat right back Cohen and a pass that beat centre half Stapleton. The unmarked Dawson stopped it, sighted and shot for his hat-trick, rich reward for endevour and opportunism.

Yet Fulham did come back when Roy Dwight made it 4-3 in the seventy third minute. Haynes had a shot saved, Dwight hit one over, Haynes had another disallowed – quite rightly, for hands. But that was the last dying desperate throw. United, on the run of the play by far the better team took over again. Fulham were already sagging and beaten before the last minute when the bomb in Bobby Charlton’s shooting boots exploded for the fifth goal.

It was United’s best performance since the Munich air disaster, a triumphant return to the days when United were famous for controlled, complete football. This was a victory which owed nothing to hysteria on the terraces nor through desperation on the field. UNITED FOR THE CUP.

Is there anyone out there who was present at either of these Cup ties?