If wishful thinking ever had a chance of coming true, Wales will recall Manchester United legend Ryan Giggs to play for his country in the qualifying matches for Euro 2012. It’s a huge call after the Welsh wizard announced his retirement from international football in 2007 but that reality has not stopped people like former Wales boss Terry Yorath saying that “The first available chance that John Toshak has he should be on the phone to Ryan and get him back into Welsh football.”

The Western Mail reports that Swansea City star Ashley Williams, who captained Wales against Scotland last season, has said that a Giggs return would represent a huge qualifying boost for the Welsh and that “there can be absolutely no doubting the impact Giggs could have on our hopes of reaching the finals in Poland and the Ukraine.”

Williams is realistic enough to wonder however whether Giggs would actually want to end his international exile saying that “Giggs has started the season in the kind of form he has always shown but there is the argument that the reason for that is because he has retired from international football and is able to focus on the Premier. So I’m not too sure if Ryan actually regrets his decision to retire” 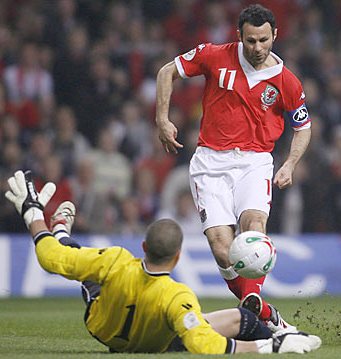 Giggs has stated that a part of him wishes he was still able to pull on the red shirt of Wales, going as far as to say he would have to consider it should John Toshack make a plea for his return even if only in an emergency.

“As a side we’re doing well but if Giggs wants to play again and the manager wants him to come back in then I don’t think anyone would argue with that” admitted Williams “without a doubt it would be a massive boost because he is one of the best players, if not the best, Wales has had. Just mentally it would be a boost to see him come back into the squad and it would have everyone buzzing and the fans excited.”

“It’s difficult to find any negatives about it happening but it only matters if it’s what each party wants” Williams emphasised “we have always struggled with players being out so to have someone of the quality of Ryan Giggs in your squad can never be a bad thing. But he retired and it only matters if he is willing to return. After the way we played as a team in the last friendly against Luxembourg, we are going into the new campaign with confidence regardless.”

Welsh goal scoring legend Ian Rush is certain that there are “No ifs or buts, Tosh has got to get on that phone and speak to Ryan if there is any chance of helping our chances of starting the campaign on a positive note. Whether Ryan plays 90 minutes, an hour or whatever, it would be a tremendous boost to Welsh football. He would help the youngsters coming through. Not only is Ryan a legend in his own right, he is very approachable.”

Rush went on to explain that “Giggs has got so much experience in European football, year after year with Manchester United, and you simply cannot buy that. In light of Aaron Ramsey’s unfortunate injury, Ryan really is the exception to the rule that you don’t coax someone out of international retirement.”

Former Wales captain Gary Speed insists “Welsh football needs a boost and to get Ryan back in the fold would be absolutely fantastic. It would create great interest in the game in Wales again and that’s just what you need at the start of a new qualifying campaign. If you had him pulling the strings in the middle of the park then you always have a chance of doing something.”

Another Wales legend Neville Southall has a different opinion however reminding everyone that they should “Imagine Ryan coming back and not playing well or the results in the first three games of the group were not favourable. There is only one man the Welsh public would blame and that is Giggs. It would be unfair on Ryan to put himself through that and unfair on Tosh to put him in that position.”

Toshack himself is far from convinced by arguments for a Giggs international comeback however saying “People talk about his form but at Manchester United there is Rooney, Berbatov, Nani, Carrick, Anderson and others. Giggsy can come on for a half hour there, be used in the right way, and do his thing” he conceded “but if he’s here again, the pressure is right on him. He can’t play the two games in four days and then go back to the levels he was and people like Ryan can’t be used to just help out with the squad.”

Giggs is just one of several high profile retirements that have blighted Toshack’s reign but the veteran manager did add “I don’t know if there’s a regret but we said the same to him as we said to all of them – if you ever change your mind let us know, give us a ring. It was disappointing to lose him but he did it in the right way” the Welsh boss continued “he didn’t phone up at six o’clock on a Sunday night to tell me as others have done, leaving us struggling to find a replacement. No, he came in and sat down and gave his reasons and that was that.”

As the professional that he is, Ryan Giggs does not know any other way.

Are calls for a Giggs  international comeback  realistic?