Saturday will be an extra special day for Sir Alex Ferguson as he celebrates 24 years as Manchester United boss. Ferguson was appointed on November 6, 1986 and has since established himself as the most successful British manager of all time. So many matches, titles and memories later, Sir Alex has revealed that his most memorable game in 24 amazing years at Old Trafford are neither of those famous European Cup triumphs but an extraordinary Premier League match at Tottenham in 2001.

United fell three goals behind but stormed back after half time with a performance that epitomised Ferguson’s incredible era at the club. Goals from Andy Cole, Laurent Blanc, Ruud van Nistelrooy, Juan Veron and David Beckham saw United recover from 3-0 down to win 5-3 at White Hart Lane.

Ferguson rates it as more memorable than those glorious European nights in Barcelona and Moscow. “The one that sticks in my mind was when we were at Tottenham in September 2001 and were 3-0 down at half-time” Ferguson remembers “but then we went on to beat them 5-3. It was such an amazing turnaround, and the fans played their part too. It was a great game.” 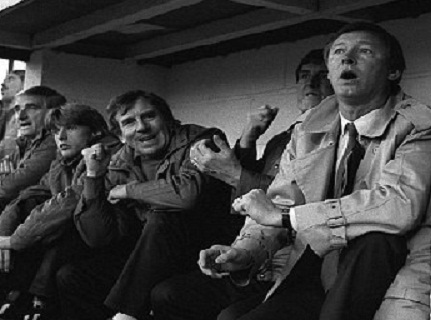 It all began at Oxford where Ferguson took charge of United for the first time and it’s difficult to appreciate how long ago that’s been. Margaret Thatcher still had years to run as Prime Minister, video recorders were regarded as a new toy, Mikhail Gorbachev had been leader of the Soviet Union for just a year and Ronald Reagan was President of the United States.

Football was a very different beast as well back then and there wasn’t much glamour about Ferguson’s first match for the club which took place on November 8 1986, two days after the Scot was appointed at Old Trafford to replace Ron Atkinson. United went down to a 2-0 defeat against Oxford United who may be struggling in the lower divisions these days but back then were plying their trade in the top flight. The match was watched by 13,545 at the old Manor Ground.

Ferguson was later to describe how shocked he was at the poor fitness levels of the United players. There was less of a winning culture at the club back then and more of a drinking culture. It would be the start of a long journey for all of us – and even longer for rival clubs.

My personal favourite was the 1999 last semi final replay at Villa Park which turned out to be a football game that had it all. A brilliant goal from Beckham put United ahead but Arsenal hit back to equalise and when Roy Keane was sent off the Gunners looked set for another Wembley final.

When Arsenal won a last minute penalty it seemed that United’s treble bid had come to an end.  But Peter Schmeichel was United’s hero yet again saving Dennis Bergkamp’s nervous attempt. A penalty shootout seemed to be United’s only hope during extra time but then Ryan Giggs picked a pretty good moment to score the goal of the decade – a goal that still send shivers up and down my spine whenever I watch the replay. Ferguson and United’s players were mobbed by their delirious supporters and their audacious treble bid was still alive.

Watching that match on television in Australia at some ungodly hour of the morning, I still remember turning to my wife saying “I can relax now, United are absolutely destined to win the treble after that.” There must have been thousands of fans who felt exactly the same way, there was simply never any doubt about it.

Add your own congratulations to Sir Alex, he will soon become United’s longest serving manager