An under strength Manchester United stretched it’s unbeaten run to 19 matches this season and 25 since last tasting defeat with a scoreless draw in a disappointing match at Eastlands. It was the first ever derby missed by Ryan Giggs since making his Premier League debut in 1991 – a truly remarkable record. Manchester City would have been the more disappointed with the result as it kept them 3 points behind United rather than draw level as they fully expected to.

By the final whistle one could not help but get the feeling that the primary aim for both sides was not to lose rather than chase full points. The bottom line is that if the Eastlands pretenders wanted to make a statement this was their big chance – and they blew it. 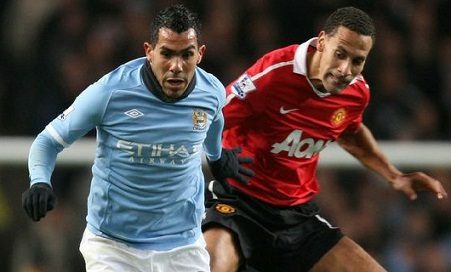 The Independent – The electronic billboards last night that advertised David Haye’s heavyweight title defence against Audley Harrison in Manchester on Saturday promised knockout punches and an engrossing dose of personal animosity which, in the end, was a good deal more than the city’s two great football clubs mustered.

They danced around each other, they feinted and they swayed but neither ever threatened to land a blow. There was one offside and no memorable chance for either team. It would have been a relief if either team had jutted out a chin in the name of ambition and tried to take the game by the lapels. But in the end they hid behind two dominant defences and the lesser evil of not losing the game. Full Report

Manchester Evening News – Manchester City and Manchester United played out a stale-mate at Eastlands as the 156th derby failed to live up to expectations. The match was closely contested and if anything United shaded it, though neither side created a clear cut chance. Carlos Tevez went closest for City with a free-kick that was well saved by Edwin van der Sar, while Dimitar Berbatov volleyed straight at Joe Hart at the other end for United’s best effort. In truth, the result only suited Chelsea, giving credence to Roberto Mancini’s belief that these warring factions are actually scrapping for second spot at best.

There was almost half an hour on the clock before City built up any momentum, with the industrious James Milner chief instigator. It was United old-boy Tevez who came closest to breaking the deadlock though, after Paul Scholes had bundled Milner over on the edge of the area. Tevez quickly made it clear the free-kick would be his responsibility and only its relative lack of pace allowed Edwin van der Sar to claw the ball out as it headed for the far corner. Full Report

Sky Sports – Manchester City and Manchester United huffed and puffed on derby day at Eastlands but ultimately cancelled each other out in a forgettable goalless draw. Unsurprisingly, ahead of one of the most eagerly-anticipated derbies of modern times, the ground was buzzing before kick-off, with much more than three points at stake.

Paul Scholes, a seasoned campaigner when it comes to such occasions but a hopeless tackler, set the tone inside the opening 30 seconds as he conceded the first of many clumsy fouls which blighted the game. His lazy challenge was in keeping with United’s start as City, led by the energetic Carlos Tevez, opened much the brighter. Full Report

Who would have got the points decision if this was a boxing bout?