He’s big, he’s mean, he’s a destruction machine or as the Old Trafford chant goes “He comes from Serbia, he’ll F***in murder ya”. Manchester United tough as teak central defender Nemanja Vidic is now warning all the rival title pretenders that United can regain the Premiership without even hitting top form. Despite the tight struggle at The Hawthorns on New Year’s Day, the team captain said that “It was a very hard game for us at West Brom and we got a bit lucky. Sometimes you have the luck, sometimes you don’t.”

Speaking to Jeremy Cross from the Daily Star the big man admitted that “We didn’t get it at ­Birmingham, but we got it against West Brom. It’s great that we got the three points especially after that last minute goal we ­conceded at Birmingham. It is hard to explain. In some games we did not perform well but got the result. But then again, sometimes we did play well and didn’t get the result. It is very ­inconsistent from us.” 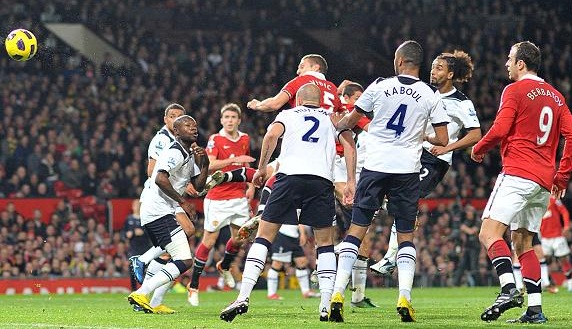 “Normally we are getting strong at this time of the season” Vidic explained “That’s why we are looking forward to playing Stoke. We have a good record this season at Old Trafford. The only disappointing ­result was a draw against West Brom, but we have won all our other home games.”

“It is our fortress, so hopefully we can win the Stoke game too and keep going” he said “our performances at home have been really good, so we are looking forward to it. A win will bring more confidence and we may have some ­injured players back which helps. We want to improve, we must play ­better and we need our players back from injury.”

“We believe we can win the league” the confident Serbia international insisted “we have certainly shown this season we can play solid. However, this year the season is very strange. If you’d told me five weeks ago that Chelsea wouldn’t win for five or six games…everyone thought Chelsea were the strongest team and that they would win the title.
That shows how strong and competitive it is in the Premier League. Just look how many points we have lost this season. If someone had said we would lose this many points, I would have said we would not win the league. But here we are – top and still ­unbeaten. And if we had won just half of the away games we have drawn, we would have been out of reach by now. Our away record is not something we are proud of but we have to keep going and hope we can change it” he admitted.

The £7m fee that Sir Alex Ferguson paid Spartak Moscow for Vidic four years ago this month will go down as one of the wily manager’s shrewdest buys but these deals also work both ways. It has helped Vidic become recognised as one of world footballs most commanding central defenders.

Are you surprised at where United stand at the half way point of the League?