Ever popular defender Patrice Evra helped Manchester United win the club’s 19th league championship shortly before celebrating a milestone birthday. Now, as he enters his 30s, the France international full back warns rivals that United can win more titles and explains the reason to Gemma Thompson from ‘Inside United’

What were your feelings after winning the league? – It was a great feeling and it’s a massive achievement. When you play for Manchester United your target is always to win the league. Losing it by a point last season was difficult to accept and I felt like I had not done my job properly. This year there is a big satisfaction.

A lot of people have criticised us – I remember some saying earlier in the season that it was the end of the empire. There were some difficult times – if you look back to when we played Bursaspor at Old Trafford in October, we were behind in the league and there were things going on off the pitch, but I remember doing an interview after that game where I said “You have to pay the musician to the end of the show, not now.” I always believed and I was proved right because we won the league. 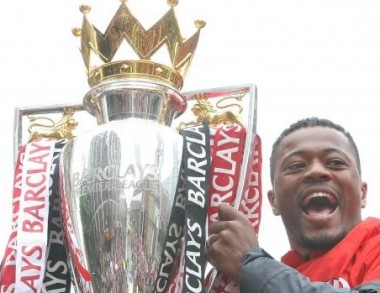 What did Sir Alex say to you all after you had secured the title? – He was so happy – and we were all really pleased for him. After we lost at Arsenal he asked everyone whether or not they wanted to win the 19th title and break the record? “How many opportunities are you going to miss?” he said “you’re going to regret it if you don’t win it.” I was so pleased we got the point we needed at Blackburn because if we hadn’t I think we would have got the hairdryer!

What can you tell us about the celebrations that night? – The celebrations were very special for me as it was my 30th birthday the next day. I’d asked the players to give me a good present and winning the league was the perfect one! I remember when I won my first title with United, I was round at Mikael Silvestre’s house and he had a bottle of champagne to mark each title he had won. Now I have the same which is fantastic. But I want another four. Our aim every year is to win the league and we won’t stop here.

You’re now on the way to catching up Giggsy’s haul of medals – It’s going to be very difficult to do that. I’d have to play for another eight years and win every year – but why not? Giggsy is a legend and if I can get anywhere near him it would be amazing.

Was it extra special knowing that it was the 19th league title, and that you were adding another chapter to the amazing history of Manchester United? – Of course. Every time you’d go to a restaurant or walk down the street this season the fans would talk about the 19th title. But I want to say to them now: we’re not finished yet. This is just the beginning. I know Manchester United can win more titles and we have to keep doing that. Of course this is a great achievement and we’re very pleased to be part of it, but we have the players and the quality to win more than 19.

It was a topsy-turvy season to watch, has it felt the same way from a playing point of view? – Yes. We weren’t as consistent as previous seasons but no team showed consistency throughout the season. The problem for us was our away form. I just don’t understand why we didn’t win more games away from home, or played the same way as we did at Old Trafford. Our home form won us the league.

Just imagine if we can come back and start winning away – we could maybe win the league by 10 or 15 points! We have to resolve the problem away from home. As I said, I don’t know why it happened this season but next year we will make sure things change.

Is it even more satisfying to have won the title when you consider how competitive the league was? – Yes, definitely. I don’t want to sound arrogant but I always believed and I was confident. When people were saying we weren’t playing well, it was only because we’d made some mistakes in terms of letting teams back into games like at Fulham and at Everton. I was confident that no team was better than us.

Can you remember the feeling in the camp after the first couple of months of the season, when it seemed that Chelsea were winning every game five- or six nil? – I respect every team in the league, but you have to remember Chelsea beat a couple of the teams who had just come into the league. But when they had their first big test against Manchester City, they lost.

The way things went at the beginning of the season didn’t scare me. I know we made mistakes and dropped some points away from home but I was not afraid that Chelsea kept winning five- and six-nil. It may sound strange but I was always confident. And we actually ended up with a better goal difference than them.

As usual, the team stepped up in the second half of the season. Can you put your finger on why this seems to happen every year? – I don’t know why we finish better than we start. Maybe we know we are close to the end and we really push ourselves. I think Manchester United like to play with pressure. We like the challenge. People have asked me this season what has been the key to us winning the league and I say it’s because we play with the right spirit, the Manchester United spirit.

Without that spirit we wouldn’t have won the title because no one player was better than another. Yes, you can talk about players like Dimitar Berbatov, Nani, Edwin van der Sar… but everyone played their part this season. I’ve always said the star of Manchester United is not one player, it’s the team. And the star this season was the team.

What do you say to people who claim United were only champions as ‘the best of a bad bunch’? – A lot of people have criticised us but we didn’t play against the critics. It’s about being confident in your ability and doing your job. People can say you’re a bad player or not good enough, but it doesn’t matter if you have confidence in yourself. You have a job to do – and when you win the league, then you have done your job.

Was 2010-11 the most competitive Premier League season?

1 thought on “Evra warns rivals – 'You ain't seen nothing yet'”