A five match USA tour by Manchester United possibly requires a bigger entourage than a world concert tour by U2 or The Rolling Stones! Okay, that may be a little over the top – although it cannot be far fetched, because I don’t have the slightest idea of how many people rock bands take with them but as David McDonnell reports in the Daily Mirror, United requires no less than a party of 80 to ensure that the multi million dollar pre season circus goes off without a hitch. 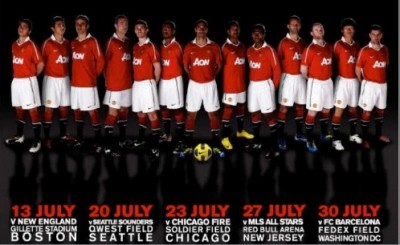 The sheer scale of Manchester United’s pre season tour of the US is shown by the make up of their 80 strong entourage, of which only 25 are players. The party is so bloated it has to be spread over two planes. With Manchester United now as much a global business brand as it is a football club, arguably even more so on revenue churning tours such as this, there is no such thing as travelling light.

At the launch of United’s new away kit at the Nike store in Seattleon Friday, the obligingly fervent crowd were whipped into a frenzy by Alan Keegan, who has been the match day stadium announcer at Old Trafford for more than a decade.

United’s mascot, Fred the Red, is also in the tour party, although the budget did not stretch to bringing the regular wearer of the costume across the Pond. A member of United’s US supporters’ club filled the role – and suit – before the game against New England Revolution in Boston, while junior members of United’s commercial staff will don the outfit on the remaining stops of the tour.

With sponsors to appease and commercial obligations to fulfil in Boston, Seattle, Chicago, New York and Washington, nothing it seems has been left to chance as United – recently rated by influential business magazine Forbes as the most valuable sports team in the world with a worth of £1.6billion – consolidate their position as the biggest sporting name on the planet. United may be playing catch up with European champions Barcelona on the field, but off it they are the undisputed kings of the financial battle. Forbes ranked Barca 26th, with a value of ‘just’ £605m.

There was more pressing of the flesh and meeting with sponsors on Monday as the squad – now including new goalkeeper David De Gea, who joined up with his team-mates for the first time – hopped on a 30-minute flight to Portland in Oregon, for a training session and other commercial activities at Nike’s global headquarters.

These days, the pre season trip encompasses so much more than getting in shape for the new season, but at least United’s players don’t have to suffer the same fate as those on the club’s first tour of the US back in 1950. On that particular jaunt, lasting six weeks and taking in 12 games, Sir Matt Busby brought a stellar group of players to the US. The games attracted huge crowds, despite football’s relatively low profile in the States back then, on a tour that started in Canada before winding up in Chicago.

This is the 12th time that United have toured the US and manager Sir Alex Ferguson feels that despite the gruelling nature of the five city tour, which will take him and his players across several time zones, it remains the best way of preparing for a season.

“This is a great country” said Fergie “the great thing about the US is that we feel comfortable here. There are no issues here for us at all, you know? The food’s good and you can walk about with freedom. Where we usually go, the Far East and places like that, it becomes a bit claustrophobic at times – but we have to go because we’ve got so many fans there. But we’re really enjoying it over here. And the facilities at the Seattle stadium and the training ground, are just unbelievable.”

Have tours like this become essential for the United business model?