No turkeys in this Christmas cracker….. 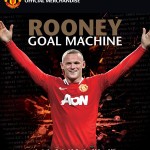 Welcome to Liam “Wrestlemania” Brown’s Barry Norman/Claudia Winkleman impersonation.  Finally, I have been asked to join the likes of Gene Siskel and Roger Ebert and become a film critic.  Ok, maybe not, but we were kindly handed a copy of Rooney Goal Machine for our consideration, so after popping it on  during a lazy Sunday Evening, I’ll tell you what I thought if you should lend me your ears…

Firstly, I must say, don’t expect too much glamour from a football DVD, cheesey music, A Level standard menu layout and title screen, it’s something we are all used to.  Take Man Utd’s Official season review DVDs for example, people will ignore the corny soundtrack and the amateurish execution of the graphics provided the actual content comes across well, something United failed with their latest offering, so I’d ignore this obvious flaw in this DVD and crack on with “the meat in the sandwich”.

Opening shots of Rooney’s thunderbolt against Newcastle are gloriously nostalgic and serve to immediately put a smile on the face. Simple narrative proudly announces Rooney has now joined the 150 goals club alongside club legends as Law, Best, Charlton, Scholes, Giggs, Hughes and Ruud.  Following this is a simple countdown from Rooney’s opening strike against Fenerbahce all the way up to and beyond his 150th strike against Arsenal (his 1st free kick).  Accompanying this buffet of goalmouth action are brief voiceovers and interviews from Fergie, Giggs and Rio Ferdinand, all wheeling out the usual pleasantries “he does it every week in training” or “we saw how good he was with the England squad, we wanted him at OT”, and then even some words from the man of the hour, offering brief insight into what was going on when he lobbed Schwarzer against Boro, or when he buried that penalty against Rangers.  Supported with useful information on scoring habits such as 116 goals with his right foot, 21 from outside the area, you can impress your friends by knowing which goalie he’s scored the most goals against (10 past Given), who has provided the most assists (Giggs and Ronaldo weighing in with 15 each), the voiceovers and trivia seem relevant and not invasive.

From the title menu, not only can you search for your favourite Rooney goal season by season, there is also handy bonus footage where  our boy picks his top ten United goals and offers a few words of wisdom for each strike.  In the spirit of this, and for the purpose of debate, I have attempted my own Top 5 Rooney United Goals, see what you think..

5) Fenerbahce 04 (2nd strike) – Hard to pick a favourite out of his stunning debut hat trick but the control and accuracy displayed wins hands down for me,  wonderful memories of this unbelievable debut.

4)Middlesboro 05 (2nd strike) – Follows a beautiful lob over Schwarzer with a stunning volley in the FA Cup, awesome display of power and placement combined, simply impossible for a keeper to save.

3)Portsmouth 07 – Inch perfect teasing lob over David James, incredible  skill and technique, looping the ball with so little back lift over arguably one of the top keepers in the league at that point.

2)Newcastle 05 – Had it not been for the quality of No1, this would win any competition, raw animalistic rage and power behind this rocket, born out of frustration with poor refereeing and finished with deadly drive, power and accuracy.

1)Man City 11 – a simply outstanding derby winning goal, changed the game on its head with this audacious, athletic and downright ingenious overhead kick.  Capped off with a gloriously arrogant chest out, arms up celebration, this will be discussed for generations.

Overall, any fan of Rooney or Man Utd will enjoy this goal soaked hour and twenty minutes (approx), Oscar winner? No, a fun afternoons entertainment? Yes, at roughly around £10, it’s not a bad deal, it’s also available on BluRay for all you technology savvy boys and girls, as Man Utd Official Merchandise goes, this represents pretty good value for money and would make a handy stocking filler for all your United fan family members this Christmas. 7/10.