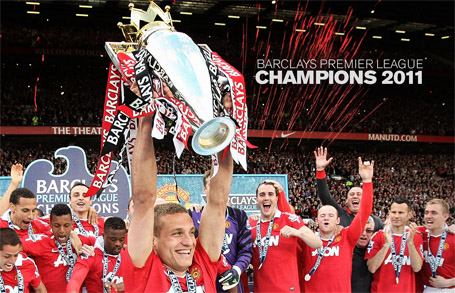 The statistics this morning read; Manchester United joint top but still second in the table due to an inferior goal difference compared to that of Manchester City. Our neighbours lost thanks to a goal by an ex-Red Devil, the most recent one to move to the blue half of Liverpool, Darron Gibson. Ironically, his departure might have brought about some cheers among United fans all over the world and what is more ironic, is that perhaps his goal in the blue of Everton must have been cheered loudest by United fans; louder than any that he has scored while wearing the red of Manchester United.

In a game that United clearly struggled to break down a resolute and physically menacing Stoke side (they are the tallest team in the Premier League), the only way possible for United to score was either by a moment of magic or from an error by Stoke. They made two maybe three or four clumsy fouls in the box and out of that, the referee awarded only two spot kicks dispatched away coolly by Javier Hernandez and Dimitar Berbatov. Paul Scholes produced another masterclass to make me eat my words as he has only taken a couple of games to get into typical form and should have opened the scoring with a volley that went narrowly wide of the post. Besides that Scholes attempt and the penalties, Berbatov had a great chance to score from open play after being set up by another man on form, Antonio Valencia only to put it wide. Scholes presence in this match also probably meant that he would sit out the next match which is a big one against Chelsea at Stamford Bridge on Sunday due to the rotation policy for the golden oldies in our team. Besides all of that, typically of us this season, we let the opponents back into the game early in the second half as we relinquished control and sat back. However, this time, we managed to move up the gears in time to exert control again. Ben Amos who stood in for the injured Anders Lindegaard and David De Gea had a very calm and composed game in goal although in fairness, he didn’t have much to deal with and whatever he had to deal with, he dealt with it without fuss. Paul Pogba came on for an impressive Premier League debut which leaves me scratching my head on why he didn’t play in earlier games when we had missing midfielders and our midfielders had to play in defence because we didn’t have enough fit central defenders.

Moving on from this game, I am not bursting with confidence or jumping up and down with joy. We got a tough run of fixtures and I do hope our injury situation clears up sufficiently and in due time. We have got Chelsea, Norwich City and Tottenham Hotspurs to play away from home, Liverpool at home and two legs of the Europa League tie against Dutch giants, Ajax Amsterdam. A tough run of fixtures but in the league eventually everyone got to play each other and there is no running away from it. Manchester City’s goals have dried up and they seem to find it more difficult away from home but their home form is still superb. The Etihad Stadium is somewhat of a fortress now. While United are navigating through a tough run of fixtures, City have got 3 home fixtures in the league to deal with during that period. We do need some of our injured players to return very soon as it could be detrimental not having them around and we could hand the impetus back to City which is something we don’t want to do. Our strength in depth is not the greatest but if we keep leaving gems like Pogba out then its no-one’s fault but ours. At the start of the season, the energy and drive of Anderson and Tom Cleverley saw us scoring goals for fun and playing our best football of the season. The young Frenchman could have a similar effect allied to the older, experienced legs of Ryan Giggs and Scholes as well as the cultured Michael Carrick. Be brave Sir Alex unleash Pogba!

I am not sure how, you, the reader will feel about United’s title chances but I have a nasty and niggly feeling that we might not win it. I would hate it to see City win it but I just get the feeling that it might not be our season. I am not pessimistic by nature but let’s examine why I feel as such. First of all, if our injury situation doesn’t clear up and stop, we are in big trouble. Rewind back to 1994-95, we ran Blackburn Rovers to the line, were unlucky not to beat West Ham at Upton Park but the damage was already done before that game as we dropped far too many points and had too many players injured or suspended. Circa 1997-98, after a great start to the season, we started faltering when injuries started taking its toll on us and the replacements weren’t good enough. The injuries came at the wrong time and at the crucial period of the season; we were running on empty as Arsenal overtook us to win a Double. Just two examples from the history books. However, if we can get our injured players back fully fit and in time without any more casualties, we could have players who would be fresh and like new signings they could boost the squad. However, I have noticed the common gripe among United fans is that we don’t feel we have a squad quite as strong as it is believed to be. In that case, perhaps a bitter pill and a kick in the teeth would provoke Sir Alex into action in the summer transfer market. Remember we bounced back from 1994-95 with our second Double and from 1997-98 with the Treble season.

To be fair to Sir Alex, we have seen Gibson and Mame Biram Diouf leave in the January transfer window, players that weren’t up to the mark at Manchester United which means the main man is watching and taking stock. I am sure we would buy someone in the summer but who will it be? In fairness, Sir Alex rarely spends big on an established player. The last being Berbatov in 2008 and that has been far from a roaring success. At best, we can describe it as a signing of moderate success. Sir Alex has preferred to work with players who can still be developed and such players will take time to shine and realise their potential. However, having lost the experience of Edwin Van Der Sar, Gary Neville and potentially, Ryan Giggs and Paul Scholes, we do need to sign one or two players who are in the age bracket of 25-30, established players who are reaching the peak of their powers. We don’t have that many in the club except Wayne Rooney, Michael Carrick, Darren Fletcher, Nemanja Vidic and Patrice Evra. One also does get a feeling that we have not sufficiently replaced the talents of Cristiano Ronaldo and Carlos Tevez since they have left us. The team has become more hard-working and gritty with occasional flashes of flair and brilliance baring the early season showing. United fans have always loved a player with flair and the ability to excite the crowd. We have two in Nani and Rooney but we need at least one more.

Moving forward from the topic of the strength in depth, is the question of the team’s leadership. Since Vidic has been sidelined for the rest of the season, we have lacked a real leader in the team. Evra might be wearing the arm band, he might have the winning, never-say-die attitude and the fighting spirit. He might have the right personality in the dressing room but to be a leader, you need something extra. You need someone to inspire like Eric Cantona or natural leaders like Bryan Robson, Steve Bruce and Roy Keane; the blood and thunder kind, taking adversity by the scruff of the neck and dragging the team back into the game. A moaner and whiner like Gary Neville, fully committed from start to finish, fully focused, a representation of the fans. That is what we have lacked. This squad at the moment without Vidic can look spineless when things go against us in a game or when we got to conjure up something extraordinary on a day when nothing goes your way. We have lacked that kind of leadership in the team and with Vidic out for the rest of this season, it is difficult to see how it can be rectified. Rio Ferdinand could be a candidate but is too injury prone and fragile to be relied on regularly. Rooney is another candidate but it’s been a long time since we saw the fiery side of him. If anything, it has been out of frustration which does everyone no good. Giggs and Scholes might be able to inspire but are not the kind of personalities to lead the charge. This is a major concern and a title-winning team needs a leader who is a real leader in every sense of the word; a leader of men.

We have just stepped into February and I do hope that our form kicks on from now till the end of the season to avoid having to swallow the extremely bitter and foul pill of City winning the league and the painful sight of them parading the trophy at the Etihad Stadium. Hope springs eternal and hope is the only thing we have to keep us going. It is this hope that sometimes defies common sense and logic. With hope we need luck as well and we can only hope that our luck does change for the better in terms of injuries and the team starts playing the kind of football we have been so accustomed to.