Move aside Cleverley, Pogba is here!

Now the title of this one might be rather annoying to some fans. Many (me included) have seen Tom Cleverley becoming something of a savior for our team. In truth, when we were 2-0 down against City in the Community Shield a while back, I was one among the many millions who were screaming for Michael Carrick to be taken off. And taken to the docks. And shot. Here was a boy who had singlehandedly turned the friendly against Barca on its head, sitting on the bench while we were stuck with a bumbling, slow, useless Geordie who wouldn’t be caught dead passing the ball forwards. 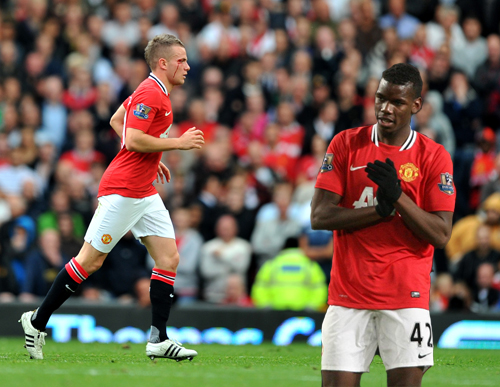 Now the title of this one might be rather annoying to some fans. Many (me included) have seen Tom Cleverley becoming something of a savior for our team. In truth, when we were 2-0 down against City in the Community Shield a while back, I was one among the many millions who were screaming for Michael Carrick to be taken off. And taken to the docks. And shot. Here was a boy who had singlehandedly turned the friendly against Barca on its head, sitting on the bench while we were stuck with a bumbling, slow, useless Geordie who wouldn’t be caught dead passing the ball forwards.

I’ll be honest, I hadn’t seen much of young Tom before the beginning of this season, other than the odd Wigan match or two, and I was left with the impression of someone rather impulsive, brilliantly talented, but lacking in that final area, misplacing that initial killer pass. Fast forward a year and Tom’s performances have made me gape with such frequency that it has conveniently created a foot-shaped whole in my face. He was absolutely mesmerizing to watch. The joyous passing, the movement, the desire going forward and the commitment staying back, all topped off with an ice cool head (and a nice hairstyle) to boot.

Then predictably, it all started falling apart, ironically, by no fault of his.

You see, that paragon of virtuous tackling, Kevin Davies, seemed it fit to do a Scholes on young Tommy, and since then, Cleverley has been casualty #1 at a rapidly filling up Carrington. Maddeningly, this isn’t a local occurrence. Tom Cleverley has many many attributes, but fitness doesn’t seem to be one of them. Cleverley has often been blighted (not in the Ferdinand-esque way) with injuries ever since he turned pro.

In March 2007, during a reserve game, Cleverley suffered a foot injury and was ruled out for 7 months. During his first loan spell at Leicester City during the 2008-09 season, Cleverley only managed 15 games as his loan spell came to a premature end when he suffered a season ending shoulder injury against Colchester United. He was forced to return to United and underwent treatment in April 2009. During the 2009-10 season, Cleverley – now on loan to Watford – managed 5 goals in 20 appearances for The Hornets before (this is becoming annoying) sustaining knee-ligament damage which resulted in a premature end to his season. Nevertheless, his stunning performances did not go unnoticed at Vicarage Road, as Cleverley went onto win the team’s ‘Player Of The Season” award.

Clearly then, Tom Cleverley is no Roger Federer. Although massively talented, Cleverley’s injury problems can cause a potential nightmare for United squad already reeling under the truckload of injuries they have suffered so far. If Cleverley will stay fit (and that is a massive IF), then there is no doubt that he will be an integral part of United current as well as upcoming seasons. But if he doesn’t…

This is where Paul Pogba comes in. Bought from Le Havre – poached as some would put it – for a considerably meagre sum, Pogba has risen through the academy ranks and has finally made his senior debut for the club during the match against Stoke City the last week. This is, by no means an easy task, especially for one so young. Not many who have made this journey have succeeded at the top of the tree (cue Luke Chadwick joke) but Pogba seems to stand out among the current crop. He has the build of Vieira and the touch of Scholes, and seems to be an effortless amalgamation of the two. Clever going forward and masterful staying back, The French U-19 captain seems a certain bet for a bright future at United.

Forgetting the current injury crisis, United have a lot of players who can competently fill Pogba’s position. Darren Fletcher(when he is fit), Anderson, Michael Carrick, Ryan Giggs, Park Ji Sung and not to forget, Paul Scholes and Tom Cleverley. If Pogba is to make his way to the highest rung of the ladder, its going to take some effort. Considering his debut at Stoke though, this doesn’t seem to be much of an issue, as Pogba was excellent for the 20 or so minutes he played. He knew when to pass, when to bomb forward, when to sit back, when to dive in (which he didn’t at all), when to shoot, and crucially, where to move. In essence, he was much like a younger version of The Ginger One. Albeit, rather darker, taller and less inclined to maiming people.

He was also a major part of the FAYC winning Reserve team last season. Alongside Ravel Morrison (who is sadly no longer with us) he was a revelation. He scored when it mattered and assisted when it was needed. In fact he so impressed Sir Alex that the Scot commented “I mean if we hold Pogba back, what’s going to happen? He’s going to leave. You know, in a couple of years’ time when his contract is going to finish. So we have to give him the opportunity to see how he can do in the first-team and he’s got great ability” at the start of the 2011-12 season. Pogba was handed matches against Leeds United and Aldershot Town in the League Cup, and he impressed in both. Another pivotal fact is that Pogba has had no significant injury problems in his career. This for one, gives him a discreet advantage over Cleverley. In addition the fact that he’s almost 6’2” also helps, as United have lacked a dominant aerial midfielder ever since Ronaldo left.

However, Pogba has had his fair share of off-field antics. He has been widely portrayed in the news as seeking a move away from Old Trafford – asking for more shekels in essence. He has been widely linked with a host of Italian clubs, and unlike Wayne Rooney, he hasn’t come out vociferously against the media, which only served to extend the hype even more. There were reports of a falling out with Sir Alex, amid a refusal to sign a new deal at the club (which incidentally, he still hasn’t). SIr Alex has often been quoted as saying he would prefer to keep hold of the Frenchman, but that Pogba’s heart wasn’t in the idea. With gossip flying everywhere, it only seemed inevitable until something or the other happened. Happily for United fans, Pogba came out after the Stoke match and said that he “wants to stay at United”. Whew!

If Cleverley can manage to stay fit, then I cannot see Pogba overhauling the Englishman for a place in Sir Alex’s team list. Also, with players such as Anderson (No, I will not bet on it) and Darren Fletcher (when?) expected to return to action sooner rather than later, Pogba has to take every chance he is given. If not, he could well become another one of those “what-if” players that we so often end up seeing. Kind of like a Diego Forlan or a Gerard Pique. Hmm in retrospect, that isn’t actually a bad thing…

Of course, a Cleverley AND Pogba wouldn’t be all that bad either. One can only hope!

Written by Editor
11 comments
Can’t wait till Saturday, bring on Liverpool!
Can We Really Make It 20 This Season?