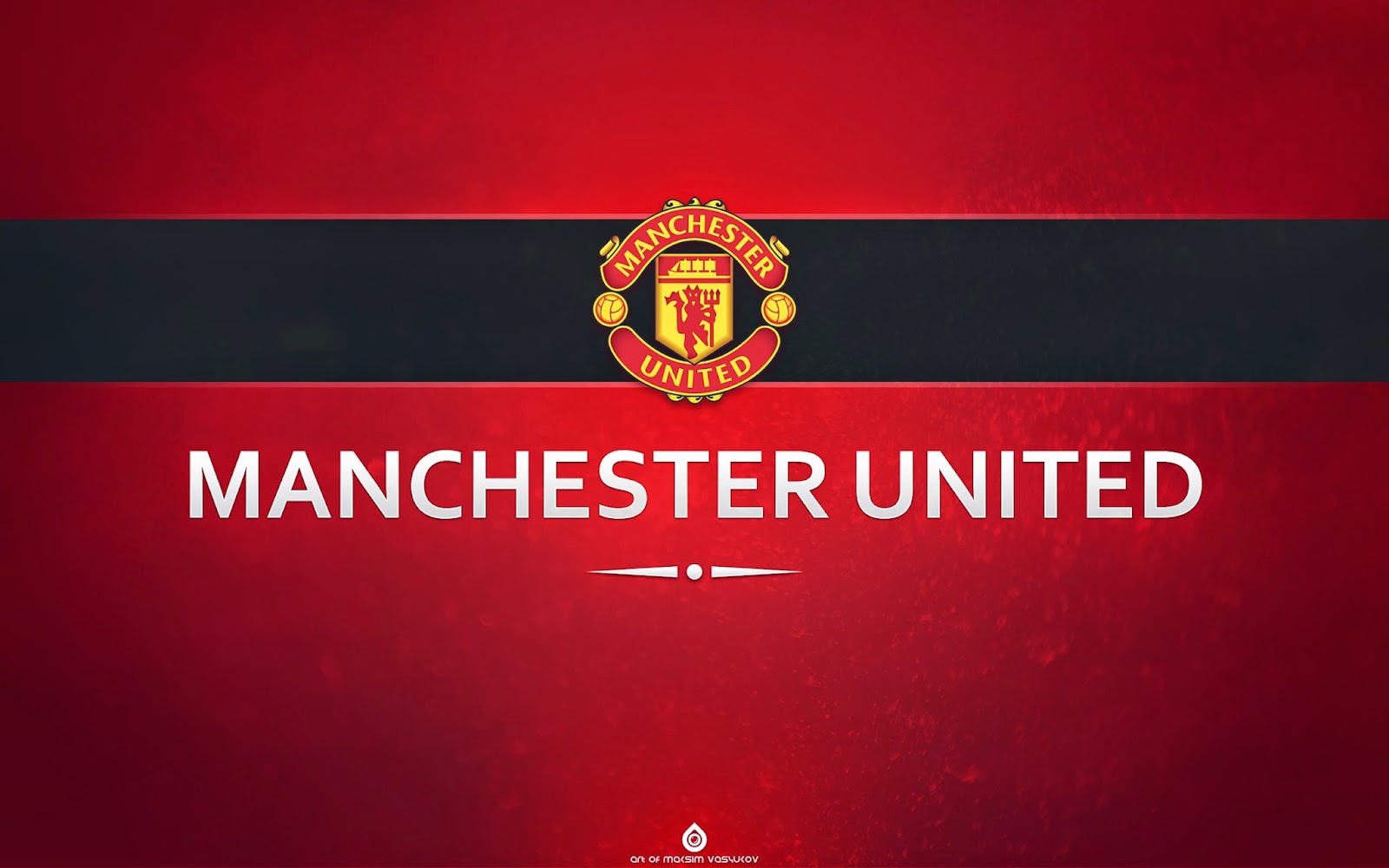 Manchester United’s last twelve months will be remembered as unremarkable for a club that had enjoyed unparalleled success, year after year, under Sir Alex Ferguson.

A turbulent year that saw United have three managers, players coming in and players going out, The ‘transition’ period of David Moyes, Louis van Gaal’s ‘revolution’, Ryan Giggs’s promotion, retirement, and promotion, one manager calling the dreaded enemy Liverpool the favourites, another beating them. Fans who have had to endure the worst year in the club’s illustrious recent history, who also had to put up with the ridicule that came with that, but followers who never stopped cheering on the team, home and away, through the good but mostly bad times.

Twelve months in which United were unable to finish the season in the top four of the Premier League, therefore failing to qualify for a place at the top table of the Champions League for the first time in some fan’s living memory. A period in which detractors of United enjoyed twisting the knife into a wounded club, and enjoyed all the pain it caused to the real fans.

In part 1 of my review of the year, I will share my thoughts on the period from January up until the end of the 2013-14 season.

The New Year started ominously for Manchester United and the manager David Moyes.

Sitting in a lowly position in the league they lost three matches with the same scoreline 1-2 within the first seven days. Starting with a loss away to Spurs, a home defeat to Swansea, which meant they were out of the FA Cup in the 3rd round, and lastly losing to Sunderland in the 1st leg of the league cup semi-final, eventually exiting the competition in a penalty shoot out.

The mood was lifted by the record signing of Juan Mata from Chelsea. The Spaniard, Chelsea fan’s player of the season for the previous two years, arrived at Carrington training ground by helicopter. The fee of £37.1 million, seemed a little excessive for a player that had been left on the bench by Chelsea coach Mourinho for most of the season. Having said that, here was a quality play maker, and a signing that gave under pressure Moyes some respite. The downside of Mata joining was that he was cup tied for the upcoming Champions League knock out stage matches. 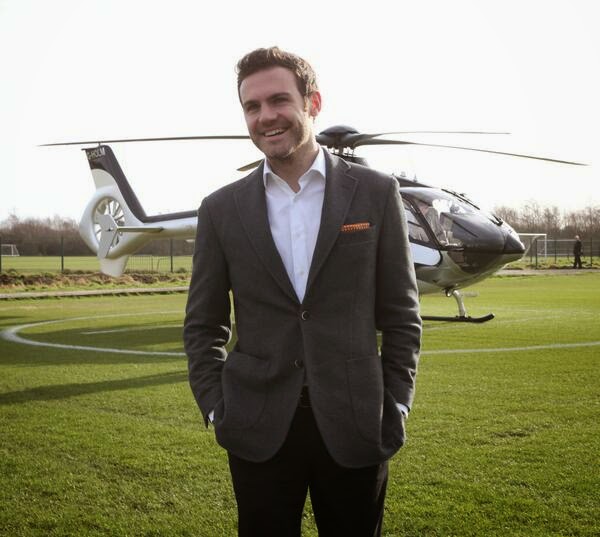 Over the course of the next two months United would lose to Chelsea and Stoke City, draw with Fulham and Arsenal, but even worse was that both Liverpool and Man City came to Old Trafford and both won with the same scoreline, 3-0.

In between that terrible run were the matches against Olympiakos in the last 16 of the Champions League. Falling to a 2-0 defeat in the first leg in Greece, United faced an uphill struggle in the return leg at Old Trafford. Needing to overturn the deficit by scoring at least three goals. The team put on a performance reminiscent of the European glory nights of the past under the floodlights of the ‘Theatre of Dreams’. Robin van Persie was the hero of the match by completing a brilliant hat-trick as the reds won 3-0 to seal their place in the next round.

However, elation was soon reduced to deflation, as news came of an injury to the team’s star striker. Van Persie, who picked up an injury in the match, would be facing a lengthy time on the sidelines. A huge blow to United and especially Moyes, who had the added problem of trying to beat Bayern Munich in the quarter finals of the Champions League.

Something clearly was not right at United. The fans started to voice their feelings, even going as far to hire a plane to fly over Old Trafford during the home match against Aston Villa, which displayed the message “Wrong One – Moyes Out” 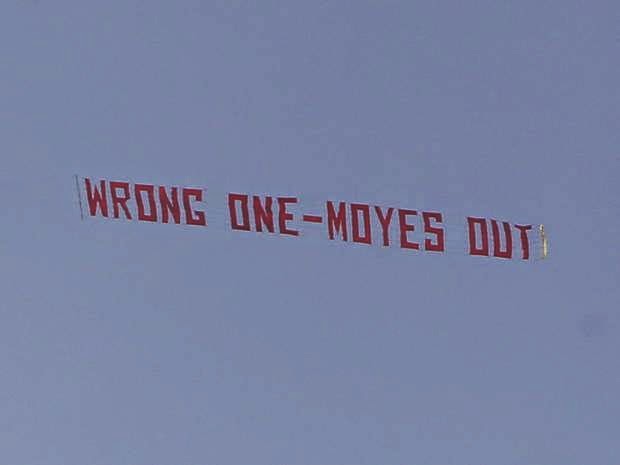 But United ran out 4-1 winners that day, and Moyes told the press afterwards that he still had the support of the fans. Which clearly he hadn’t.

The team’s Champions League journey, where Moyes had enjoyed his best run of results, came to an end with defeat by Bayern Munich over the two legs, 2-4 on aggregate. Pep Guardiola’s team had given United a lesson in organisation and teamwork. They had too much quality over the two matches. Without the goal threat of van Persie, United didn’t really stand a chance.

The remote possibility of bringing silverware to Old Trafford had gone, which prompted calls by the fans, and the media alike, for Moyes, and more importantly United, to be put out of their misery.
The final straw for Moyes came with a 2-0 defeat at the hands of his former side Everton at Goodison Park, two days later the club announced that the ‘Chosen One’ had been sacked.

When it was revealed that Moyes had been chosen by Ferguson as his ideal replacement back in 2013, a lot of head scratching followed, but everybody to a man, and woman, stood behind his appointment. I believe that it was a step too far up the management ladder for Moyes, who had been at Everton for 10 years but won nothing. He lacked the experience for such a huge task at arguably the biggest club in the world. I do have a little sympathy for his situation, but not too much, as his pockets bulged with a sizeable £5 million in compensation. Not bad for ten months of suffering, not by him but by the fans.

After the departure of David Moyes, it was left to the popular choice of Ryan Giggs to step up and lead United through the remainder of the season, and to try and end it on a positive note. Once in place Giggs immediately called up the help of his friends from the class of ’92, all except David Beckham and Gary Neville. What a sight it must have been at Carrington to see Giggs, Butt, P.Neville and Scholes leading the training sessions.

The boost in the teams morale showed in the first match against Norwich City, in which a rampant United team ran out 4-0 winners. Poor Norwich didn’t stand a chance in a pumped up Old Trafford. The atmosphere was electric, as Giggs strolled down the touchline soaking up the rapturous applause from the home fans. He also looked the part in his club suit, and had an air of authority about him. Not only did the suit fit, but also the position of interim manager suited him perfectly.

The team played with a new found confidence that day, as they seemed to be released from the shackles that had held them back under Moyes. They went on the attack with a free flowing style that even Giggs would have been proud to be a part of, had he not dropped himself!

Another away defeat to Sunderland brought everybody back down to earth with a bump as that wasn’t in the script. The final home match of the season was against Hull City. A match in which Giggs showed that he wasn’t afraid to put faith in the youngsters by giving debuts to James Wilson and Tom Lawrence.

Wilson responded to his inclusion by netting a brace, and proved that United had another future star in the making. United ran out 3-1 winners on a day which would see Ryan Giggs play his final match in the shirt of his beloved Red Devils. His retirement as a player being announced in his after match speech to the Old Trafford faithful.

The last match of the season was a dour 1-1 draw away at Southampton. A match which also saw the end of three stalwarts of United’s defence over the previous decade. Rio Ferdinand, Nemanja Vidic and Patrice Evra all ending their playing days with United. 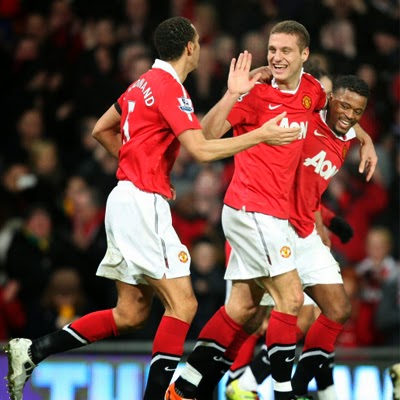 United finished a hugely disappointing season empty handed and an embarrassing seventh in the league. There was a feeling of thank god that was over so the rebuilding could begin. The situation the club found themselves in could only improve.

On the 28th of May it was announced that Malcolm Glazer, the patriarch of the Glazer family that owns the club, had died. His sons would continue to run the club.

After the euphoria of Giggs being appointed interim manager, it was still obvious to all that the squad would need an overhaul in the Summer. The biggest question was whether Giggs would be given the ultimate responsibility, or would the club go for a new team manager with the experience in management needed to take on such a big challenge.

Fans were calling for Giggs to be given a crack of the whip, as he clearly had the players support behind him. Realistically though, they knew if the good times were to return to the club quickly, then the appointment of a manager with the personality and knowledge to turn the club’s fortunes around was needed. The hard work had to start again, a new chapter in this great club’s history was about to begin.

The speculation of who it would be was ended on the 19th of May with the announcement that the Dutch national manager, Louis van Gaal, had been offered, and had accepted the illustrious position of Manchester United manager.

The revolution had begun.

Thanks for taking the time to read part 1 of my Man Utd year review.

Part 2 will be available soon.