It’s with a feeling of regret that I am writing this blog since it has been confirmed that Darren Fletcher has agreed to a move away from Old Trafford after almost twenty years on the United books.

A stalwart for the Red Devils during the heady days of Alex Ferguson through to the present, a player who didn’t always receive the recognition he deserved for his performances in the middle of the park. One thing is for sure the Scot is a fighter in more ways than one and always gave his best for the team. 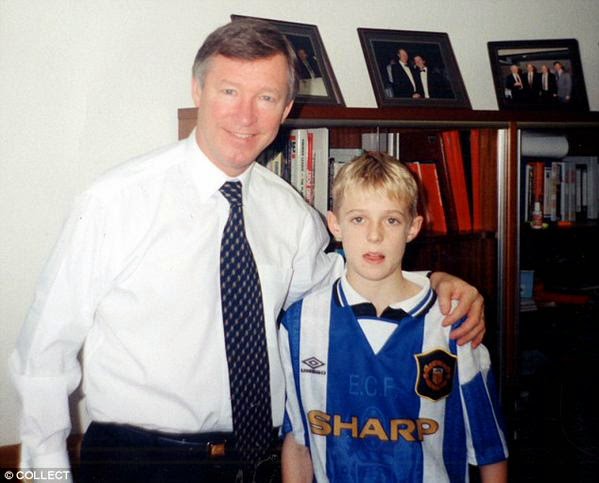 Born in Dalkeith, Scotland and raised near Edinburgh, Fletcher played his youth football at Hutchison Vale and Tynecastle Boys Club before being scouted by Manchester United and became a young player at United in 1995 at the age of 11.

He was originally lined up as a right midfielder but over time Alex Ferguson and his coaches pulled him into a more central midfield role, progressing well he signed a professional contract on his 17th birthday.

Unfortunately due to a run of injuries his first team debut was behind the originally planned schedule. It eventually came on the 12 March 2003 against Basel in the second group stage of the UEFA Champions League. In the same season Fletcher received the Denzil Haroun Reserve Player of the Year award.

The following year was his big breakthrough season playing a number of games culminating in a winners medal after United beat Millwall in the 2004 FA Cup final. It wasn’t until the following season that he recorded his first goal in United’s colours. It came in a 2–0 win over Middlesbrough on New Years day at the Riverside Stadium.

Due to the quality in the midfield, which included Keane, Ronaldo, Scholes, Carrick and Giggs, the Scots chances were limited over the next few seasons. His one outstanding performance came at Old Trafford in the 7-1 demolition  of Roma in the Champions League quarter-final in 2007.

In 2007-08 Fletcher struggled to find a regular place in the team as players like Anderson and Hargreaves were Fergie’s preferred choice to play in the middle. He made fleeting cameos, most notable in the FA Cup 4th round win over Arsenal, a match in which he scored a double. He received a Champions League winners medal in Moscow as an unused substitute.

Even though only on the fringe of the first team and mainly used as a substitute, Fletcher was rewarded by United with a new three year contract in 2008. Clearly this was a sign that Fergie valued his fellow countryman and did have plans for him.

In the 2008-09 season he managed triple the amount of appearances of the previous campaign, 42, and contributed to the cause with 4 goals. It was in the semi-final 2nd leg of the Champions League against Arsenal that still leaves a bad taste in the mouth.

Fletcher received a red card in the match and after evidence showed that it was clearly not a sending off offence the club appealed to UEFA asking for the ruling to be overturned, UEFA of course declined to accept the request and United went on to lose the final to Barcelona. Who knows what difference he would have made, but I believe the Barca players were slightly relieved not to see him play.

Fletcher had at last established himself as a first team regular after some serious head down work ethic, the same attitude that would see him through more difficult times in the future. However, for now, he was starting to flourish in the heart of United’s midfield and started to build a great partnership with Michael Carrick.

Over the next two seasons Fletcher played over 75 times for the Red Devils and chipped in with six goals, some of which were vitally important. It also included two Premier League titles and at the end of the campaign he was chosen for the Premier League XI and made club vice-captain.

In 2011 after missing so many matches many of the fans had an inkling that something was seriously wrong with Fletcher. Rumours were ripe, so in November Manchester United decided to reveal the seriousness of his condition.

Most were unsure of the severity of the illness and many thought that we had possibly seen the last of the Scot in the game. It was no surprise that his past hard work ethic paid off yet again as the popular midfielder battled his way through the illness and made a complete recovery.

He returned to action to tumultuous applause as a substitute on the 15th December 2013, making his first appearance for nearly a year, when he came on as a substitute for Ryan Giggs in a 3-0 victory over Aston Villa.

That season he went on to make a further 17 appearances, a true testament to the resilience of the player.

In the summer of 2014 it seemed that Fletcher would continue to progress after his illness with the arrival of Louis van Gaal. The new manager quickly let it be known how important he was to the transition of the club by naming Fletcher as vice-captain behind Wayne Rooney.

Following an unbeaten pre-season tour of the USA it was back to England and the start of the new season. Six players had joined the LvG revolution, including three new midfielders Herrera, Blind and record signing Di Maria. Deep down Fletcher must have known that this would limit his chances in the team and that has proven to be the case. Managing only a handful of appearances and relieved of the role of vice-captain the writing was on the wall.

A number of clubs came knocking at the managers door including numerous Premier League sides desperate for the experience that Fletcher would bring them. In the end the level headed Scot chose a move to the midlands to sign for West Bromwich Albion, meaning he could easily commute from his family home. The start of the next chapter in his career has begun.

I wish nothing but the best for Darren Fletcher in his future endeavours and thank him for all he has done in his time at Old Trafford. I’m sure all United fans will give him a standing ovation when he returns to play at the Theatre of Dreams.