To Hull and back. 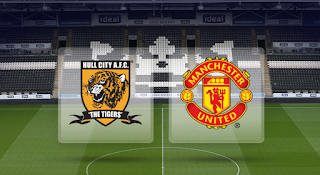 “The Hull coach is a child of Manchester United, but we will be fair to the Premier League and Newcastle.” Words which were spoken by Louis van Gaal in his press conference on Friday before the last match of this season.

A Premier League match that had far more importance for the Tigers than the Red Devils.

Hull desperately needed a win to have any chance of avoiding relegation and hope that Newcastle would come unstuck.

On the other hand, United had a very slim chance of finishing third but that would have depended on Arsenal losing and United scoring a hatful of goals.

So after an uninspiring away season, which United would turn up for this match? The one that won at the Emirates and Anfield or the side that lost at Goodison Park and the King Power Stadium. The answer was most definitely the latter.

Wayne Rooney returned to spearhead the attack and Victor Valdes made his first start for the team in place of the still injured David de Gea. Angel Di Maria made a rare start for the side as Fellaini took his place on the bench. There was no place in the squad for Falcao who had played his last part for the team last week.

United kicked off their final match in the change strip of all white.

Tha atmosphere, as expected, was nervous from the home crowd, but the away fans were in typically fine voice with their special tribute to George Best who would have celebrated his birthday this week.

Hull started on the front foot and in the first minute Valdes was called into action to save a header on his line. One minute later Rooney nearly opened the scoring at the other end but fired over the bar after a pass from Rojo.

6 minutes in and a there was a slight hesitation by Valdes in goal as Hull attacked that nearly let the hosts in with a chance. To be fair to Valdes, he must be short of match timing after a lack of games due to the form all season of De Gea. Then Di Maria went to ground after a collision on the half way line which left him winded.

The first ten minutes and it was all the home side as they peppered the visitors box with crosses from corners and free kicks which were haphazardly handled by the United defence.

United struggled to get into any type of rhythm this was not helped by the fact that Young was used more in the middle to accommodate Di Maria on the left.

In the 17th  minute Hull thought they had scored after the ball was bundled over the line after Valdes fumbled a cross, but the linesman had raised his flag for offside. Straight away, Valdes redeemed himself by making a world class save down low to his left post following a chance from Elmohamady. From the following corner, the ball was in United’s net once again but for the second time offside was the ruling. 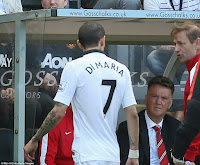 On 21 minutes Louis van Gaal was forced into a change as the hugely disappointing Di Maria came off to be replaced by Adnan Januzaj.

Without the reliable De Gea behind them the away defence seemed jittery with everything Hull were throwing at them.

On the half hour it had been a lacklustre performance by United who had not created anything since the Rooney effort at the start of the half and honestly looked like they were just going through the motions as news had come through that Arsenal were up 3-0 so fourth position would be the best United could finish.

The captain showed his frustration five minutes before half-time as he lost the ball near the corner flag and as the defender cleared his lines Rooney had a sly kick at him that was luckily ignored by referee Lee Probert.

United had an opportunity to break the deadlock however Herrera couldn’t get on the end of the cross from Young. Good vision again by Ashley Young who was back in his preferred position on the left wing.

Half-time 0-0 and a poor first 45 minutes from United and not the season ending high the fans were expecting. Although Valdes pulled off a brilliant save he and the back four looked on edge as Hull tried their hardest to bully them into mistakes a tactic that almost paid off.

Di Maria didn’t last long in his first start for ages and with him in the side the team looked so unbalanced and without any imagination, moreover, Young must have been displeased having to move from his favoured left wing spot to make room for the Argentinian after the excellent season he has had.

The second half started with end to end football but with no penetration. Herrera had a strike blocked followed by a Hull counter attack with Meyler wasting a chance.

Ten minutes into the half and Hull won a free-kick after Blind was adjudged to have committed a foul right on the edge of the box which came to nothing.

56 minutes and Herrera broke forward in so much space but couldn’t pick out the killer pass to one of his teammates. One minute later Mata played a wonderful ball over the top aimed at Rooney, but the captain just couldn’t reach the ball.

Two minutes later there was a second change of the day as Fellaini came on for Young. Following the change the lively Herrera had another chance with a right-footed strike from inside the area which flew slightly wide of the post.

Hull was almost gifted a goal from another Valdes mistake as he missed the ball with a punch and Blind cleared off the line. Former red Paul McShane almost got his toe on a cross from the corner. At this time in the match, Hull was edging closer and closer to opening the scoring.

68 minutes United were awarded a free-kick in a dangerous spot after a mazy run by Januzaj but once again the chance was wasted.

Then in the 70th Valdez proved his class as he was more alert this time saving comfortably from a deflected shot on goal.

The third and last change for United came in the 72nd minute as youngster James Wilson replaced Juan Mata. Following the change Valdes made another excellent stop low to his left. The keeper showed glimpses of his former self with two world class saves but also showed his fallible side when dealing with crosses.

There were two moments of madness in the last twenty minutes, the first when Hull were lucky to not have been reduced to ten men after Abel Hernandez clearly punched Phil Jones in the stomach in the United area, but the referee waved play on.

Then to rub salt into the wounds, Fellaini was given his marching orders after following through on McShane which the refereee decided was dangerous play and issued a straight red card to the Belgian. McShane needed stitches in a leg wound and a head bandage.

After a lengthy stoppage time, Hull attacked and again Valdes was alert enough to parry a shot in a crowded penalty area.

The pressure was building in the stadium as news filtered through that Newcastle were leading by two in their match. Attack as they might it looked to be all over for the Tigers as the match entered the last five minutes.

With 90 minutes on the clock there was a late chance for United to take all the points as Januzaj won a free-kick right on the edge of the box. Rooney took the responsibility and fired over the wall, but the keeper Harper tipped it over.

The referees assistant showed an extra seven minutes to be played which evoked memories of when Steve Bruce was the hero all those years ago at Old Trafford when United beat Sheffield Wednesday to all but win the league with a similar amount of added time in his United days. Unfortunately for him and his team it wasn’t to be as good today.

Full time and United’s last match of the season ended goalless which meant they had finished the season in fourth and Hull City were relegated. Try as they might Hull couldn’t find the breakthrough needed. As for United, it was a typical end of season display with nothing really to play for. The biggest disappointment being the ridiculous challenge by Fellaini which earned him a deserved red card and blighted a fine season for the Belgian.

In a week that saw, as expected, David De Gea win both the players’ and fans’ player of the year awards speculation continued about the keepers future along with a number of other players. The manager promised that all would be resolved after the last game of the season and he reiterated his stance that he felt De Gea would remain at the club.

Louis van Gaal has delivered on his promise of a top four finish and I look forward to him strengthening the squad as that was the biggest problem this season, a lack of depth. We desperately need a couple of defenders, a holding midfielder and at least two forwards as I can see him clearing the decks of players who do not match his renowned philosophy.

I would like to take this opportunity to thank all the people who took the time to read my blogs through the season and I really appreciate all the feedback and kind words that you gave to me. I write about United because the club is my passion and has been for a long time but it’s the fans who make it all worthwhile and without them United would be nothing.

I look forward to next season and sharing my thoughts on the new campaign which I hope will be another step closer to the return of past glories.

Thanks as always for reading.