There’s a New Martial in Town 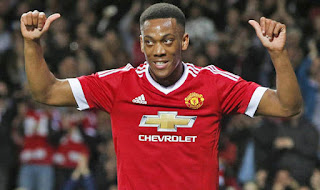 He has endured comparisons galore by being dubbed the new Henry, Anelka and Kluivert but there is one thing for certain Anthony Martial has the potential to surpass all of their achievements and become a great among the greats at Old Trafford.

When the 19-year-old arrived at United at the end of the transfer window many eyebrows were raised, not only at United but around the football world, at the size of the fee paid for such a young talent.

The French teenager was signed from Monaco by Louis van Gaal for a fee that will rise to around £50m depending on how successful his career at United turns out to be. There was obviously something that the manager saw in him that many hadn’t to make him the most expensive teenager in world football.

The United fans spent the summer trying to second guess who was the one striker that van Gaal had mentioned would be joining the Red Devil. Was it to be Muller, Benzema, Griezmann, Cavani or even Bale? But he surprised everyone by turning his attention to a youngster, who, although well known in France was relatively unknown in England.

However, from the moment that Martial made his debut for United as a scoring substitute in the 3-1 victory over arch rivals Liverpool all that changed and changed dramatically.

The manager had warned the faithful not to get too carried away with the striker, but that was not easy as he then went on to score three more goals, including a double away at Southampton and one in the League Cup against Ipswich Town all scored with that certain quality only a class striker has. His tally so far has equaled Falcao’s total for all of last season.

His latest star turn came in the Premiership at Old Trafford in which he failed to score against Sunderland but put on a display of such maturity, strength and confidence it was as if he had led the line at United for years instead of only weeks.

The skill he showed in the assist for the Rooney goal was impressive and he also used his power and awareness to set up Memphis who really should have done better. At no time in the match did he shirk his responsibilities and on many occasions during the game he was surrounded by three or four defenders, which shows that opposition players have already woken up to his threat as a forward.

The impressive striker must be full of confidence after all the plaudits coming his way. It is so easy for a young talent to have their head turned by all the attention, especially at a club the size of United, however, there is one important factor in keeping his feet firmly on the ground and that is he is married and has a baby daughter.

Having such a young family means that he won’t be spotted coming out of clubs late at night, but will most likely be snapped pushing a pram around shopping centers. Fergie would have loved him.

Along with the likes of Memphis, Shaw, Lingard, Pereira and Wilson, Martial joins a young group of players who have brought the belief back to the team that the future at the club is bright and they will provide the springboard for future success at United.

With all the attributes that Martial possesses he has the chance to write his name into the United folklore much the same as another deadly assassin did, a certain Ole Gunnar Solskjaer.  Now there’s a comparison.