United Keep the Wolf from the Door

After returning to the summit of the Premier League for the first time since 2013 United’s attention turned once again to the Champions League and a must win home tie against German outfit Wolfsburg.

The last and only time the two sides met was in the same competition back in 2009 when United came out on top both home and away with Michael Owen scoring a hat-trick in the match in Germany.

Louis van Gaal had a few injury concerns ahead of the clash at Old Trafford, including long-term casualty Luke Shaw, who had the terrible double leg break in the first group stage defeat by PSV. Also missing were Rojo, Carrick and Herrera.

Knowing that experience would be key against the Germans the manager chose his own German, Schweinsteiger, to bring the much- needed assurance in the midfield especially with Carrick absent and a be a helping hand to the players who are only just beginning their European journeys. 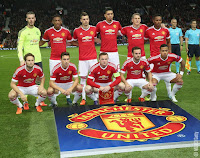 The home side got the game underway, but disaster struck as early as the 4th minute as Caligiuri opened the scoring for the visitors as United’s defence were caught cold when Valencia played the striker onside by not moving up with the other defenders. A really bad mistake by Valencia who had been a doubt before the match.

United’s first real opportunity came from Mata who had a shot deflected for a corner quickly followed by in form Martial, whose curled effort ended just wide of the far post.

Wolfsburg, to be honest, started the brightest of the two sides and obviously came with a game plan to try and nullify United’s attacking threat by defending as one and attack on the counter. The Red Devil’s would need all of Mata’s guile, Smalling’s defensive savvy and Schweinsteiger’s mastery in midfield to overcome the Germans.

Not for the first time this season United had started the first half poorly, but after a shaky twenty minutes they at last started to put pressure on the oppositions’ defence and if not for some woeful finishing would have levelled. Especially from Rooney, who skied his effort into row Z after some brilliant work from Martial in the box to gift the captain the chance.

Memphis was next to miss a chance after he was played in by a wonderful ball from Mata but the young Dutchman’s header was easily collected by the keeper. It was turning into one of those nights you dreaded at that Theatre of Dreams.

Then just after the half hour mark United got the breakthrough their play had deserved when they were awarded a penalty for a clear handball decision after a Mata cross. The huge responsibility was taken by Mata himself, who calmly placed the spot kick into the net to level the match at 1-1.

The goal seemed to lift not only the fans, but also the players as almost immediately Memphis had two chances to put the home side ahead but failed on both occasions.

There were two bookings in quick succession for Schneiderlin and Schweinsteiger for tackles that the referee deemed to dangerous, however the challenges didn’t seem that bad at all and in fact Schweinsteiger reacted angrily towards the German opposition player for his caution. Both players would have to tread carefully for the remainder of the game.

Half time and it was all square at 1-1 and van Gaal’s side must have been ruing the missed chances that had fallen their way the main culprit being Rooney and his miss when it looked odds-on he would score. The players could take solace in the fact that their second-half performances this season have produced more productivity, which is certainly what was needed in this match as Wolfsburg still posed a threat when attacking.

United started the second half attacking the Stretford End with the hope of making the chances count and to get their noses in front as soon as possible. Young had replaced Valencia at right back strangely leaving Darmian at left back.  However, it was Darmian, who made a telling clearance from inside the box from an early Wolfsburg attack.

Then it was the moment when Chris Smalling became the unlikely hero as he netted from close range in the 53rd minute after a masterful back heel into the area by Mata. If anyone deserves a goal this season it is Smalling. The defender has impressed so far this term at the back and his overall game has improved from last season.

David De Gea produced his usual match saving save, this time beating away an effort from goal scorer Caligiuri.

On the hour mark, Memphis made way for youngster Pereira having just been cautioned for absolutely nothing. Another case of the Wolfsburg players overreacting to con the referee into booking a player. Unfortunately, Memphis had been mostly wasteful with his possession, but the experience should be helpful for him and the side in the future.

There was a scare for the United faithful as goal hero Smalling landed awkwardly on his right ankle, thankfully it turned out not to be as serious as it first appeared.

The visitors still threatened when on the attack and came close on a couple of nerve-racking occasions for the home supporters. 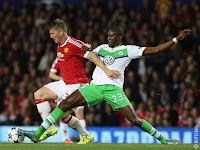 Van Gaal made his last change of the game when he replaced Schweinsteiger with Phil Jones and immediately the defender was called on to clear the danger from a Wolfsburg attack. Schweinsteiger didn’t have the impact he would have hoped for but he gave his all for the cause. The change meant that Blind moved into midfield with Jones rekindling his partnership with Smalling.

Young made his way into the referee’s book for time wasting at a throw-in and with the way the official brandished the card in the match the players had to be more careful. To prove the point Schneiderlin walked on eggshells for the last ten minutes of the match when he gave away a couple of free-kicks in succession and was certainly playing a dangerous game having already been booked in the first half.

United had a late free-kick in a dangerous area to kill the game off, but Pereira couldn’t replicate his goal heroics against Ipswich this time round. 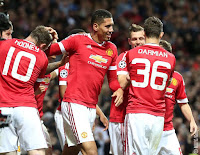 It finished 2-1 to a United side who were grateful for Smalling being at the right place at the right time to ensure the Red Devils achieved their first win of the season in the group stages of the Champions League.

Some of the performances need mentioning for differing reasons Mata performed to his usual high standard and he provided the outrageous back-heeled assist for the winner along with his penalty, unfortunately his influence was less felt as the second half progressed, Martial continued to impress as he ran the front line admirably, but it is Smalling who deserves the plaudits and the man of the match award for his all round marshalling of the defence and his deserved winning goal.

However, the one player who flattered to deceive was once again Rooney. On too many occasions the play broke down when he was in possession and as each week passes it’s becoming the same old story as his performances are just not good enough for the quality that he possesses and it is a quandary that the manager has to face up to as quite clearly he is not getting the best out of his captain as was summed up with the clear cut chance he ballooned in the first half one that the Rooney of old would have buried with conviction.

On a positive note, the side registered their first three points in the group and will hopefully build on that as they face a tricky double-header against CSKA Moscow.

In reality for all of the Germans pressure on United’s defence, David De Gea only had one save to make of real importance add that to a couple of last-gasp clearances from the defence and United dealt with the threat from the visitors who quite rightly were left chasing the game and in fairness United had ample opportunities to kill the game off.

Written by Editor
United’s Dismal Defeat at the Emirates
Guess Who’s Top of the League Now?!