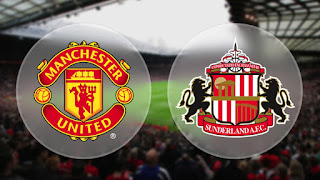 Manchester United defeated bottom of the league side Sunderland at Old Trafford and returned to the summit of the Premier League for the first time since 2013.

As United geared up for a busy period, which will see them take on Wolfsburg, Arsenal and Man City, the Old Trafford outfit welcomed Sunderland to the Theatre of Dreams with the hope of another three points that would keep up their momentum in the Premier League on the back of victories over Liverpool and Southampton.

The stand-out performer so far has to be Anthony Martial who continued his scoring exploits against Ipswich by netting a late goal in the 3-0 win that has given him a wonderful start to his United career having scored four goals in four matches equalling Falcao’s total for all of last season.

The manager has warned the fans about getting over excited with the French youngster, but it is hard to ignore the Solskjaer like finishing qualities of the 19-year-old. His technique in front of goal is sublime to say the least.

Darmian would start in the left back position for the first time this season. It’s not a position he is unfamiliar with as he often switched between right and left back while at Torino. Both Carrick and Schneiderlin returned to the midfield allowing Schweinsteiger and Herrera to have a rest on the bench.

Martial’s tremendous form meant that he would start the game and Memphis was also recalled to the side. With Pereira on the bench, United ensured that they had a youth produced player involved in the matchday squad, a record that extends way back to 1937.

United took only five minutes to create their first chance of the game when temporary left back Darmian surged down the wing and delivered a well-worked cross that, unfortunately, eluded everyone.

Shortly after, Martial showed his immense composure on the ball while surrounded by three defenders on the edge of the box by holding them off and winning a free kick that Mata wasted with a poor ball into the area.

It was an overly patient approach by the home side as if they were biding their time to strike at the heart of the away side. Mata almost made the breakthrough with a shot that was deflected for a corner.

The giant that is Pantilimon in the Sunderland goal made a costly error when he handled the ball outside his area to gift United a free-kick in a promising position, however, once again Mata squandered the opportunity. Where’s Pereira when you need him most?

The away side’s first real attempt on goal came in the 23rd minute, but the strike was well blocked by that man De Gea.

Half an hour in and it was the same old story for United this season as they enjoyed the majority of possession but created nothing of note in the final third.

Bottom of the table Sunderland took a leaf out of fellow North East strugglers Newcastle’s book in the art of defending and their clear time-wasting started to anger the Old Trafford faithful as it broke up any rhythm to United’s play.

There was a worrying moment when Martial went to ground clutching his right knee after chasing down Cattermole. Luckily for the side the youngster eventually got up, dusted himself off and got on with the game.

United wasted yet another free kick after a Johnson handball and this time it was Memphis who took the responsibility, but strangely he hit his effort so weakly that the keeper could have visited the club’s museum before collecting the ball.

The breakthrough eventually came in injury time when Blind played a delightful ball into the area which Mata managed to connect with at the far post and his square ball found Memphis who steered the ball over the line to score his first Premier League goal for United and give the Red Devils the lead at half-time.

A first half, which was disappointing in the fact that United failed to produce any decent efforts on goal until a moment of quality from Daley Blind which opened the Black Cats determined defence.

The second half started perfectly as United’s new hero Martial collected the ball inside the area and dribbled to the byline before delivering a ball into the six-yard box, which Rooney managed to deflect into the net to make the scoreline 2-0.

The goal by the captain was not only his first Premier League goal of the season, but also equalled Denis Law’s league record of 171 goals for the club.

The second goal should have inspired the home side, but it was Sunderland who seemed galvanised by it as they brought an instinctive reaction save from De Gea among a crowd of players down by his near post. The Spaniard came to the rescue again on the hour mark as he saved with his legs when one on one with van Aanholt.

Just before the regular change of Schweinsteiger for Carrick for the last twenty minutes there was an excellent chance for Memphis to grab his second of the day and put the match well out of Sunderland’s reach. Martial stormed forward with power and played a perfect pass into the path of Memphis, but when a goal looked certain the keeper came out and blocked the Dutch forward’s effort.

Martial almost continued his scoring record when he got his head to a Valencia cross, however, the ball whistled just over the crossbar.

Blind took a nasty knock to the face in an accidental collision and was substituted by the manager with Jones coming on in his place.  Thankfully Blind looked none the worse for wear as he came off.

The final change of the game was Young for the lively Memphis and straight away Young interchanged passes with Rooney, who played the ball to Mata, but his first-time effort was well saved down low by the keeper.

The last ten minutes were played out in a pedestrian fashion with the home fans blaring out to the watching world that United was once again top of the league.

There was still time for Mata to add the icing on the cake when he put the ball away following excellent wing play by Young to make the score a deserving 3-0. 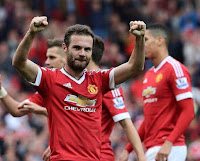 In the move for the goal Young showed once again that he is in superb form and fully deserves the plaudits he receives for his willingness to be patient and take his chance whenever it comes.

Full time and an important win that took the side to the number one spot even though having not played particularly well. However, it’s the result that counts at the end of the day.

There were many players who deserve special mention including Darmian, who handled his defensive change without putting a foot wrong and along with his partners, Smalling, Blind and Valencia, ensured that Sunderland didn’t really get a look in. In the middle, Schneiderlin produced his normal effective performance without any fuss and Mata once again showed his class and grabbed his first Old Trafford goal of the season.

But it is the French youngster Martial who has given United a new dimension to their attacking style of play and fully deserves to be named man of the match for his all-round display of strength and determination in attack. Although he failed to find the net in this game his overall play ensured that United had the upper hand when on the attack and he certainly has a mature head on his shoulders for a nineteen-year-old.

Let us celebrate the fact that United are back where they belong at the top of the league for the first time since the days of Alex Ferguson. This time under the philosophy of Louis van Gaal.