United’s start to the season. 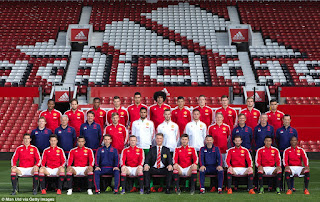 With the clubs on another forced break for the latest round of international matches I thought it would be the perfect opportunity to take stock of how United’s season has been going so far.

The top of the Premier League is as close as it has been for a while with the top four clubs within a few points of each other and it has to be said that no team has taken this season by the scruff of the neck and turned the screw.

All the usual suspects in the mix for the race to be champions have not exactly had an easy ride as the teams who are usually considered inferior have turned out to be early season surprises. The likes of West Ham, Southampton and Leicester have produced displays far above their usual level and have earned the right to be up there with the big boys.

As everyone in football tells us the league is never won in November and I expect those teams to fall away as the season progresses as their squads are nowhere near big enough to sustain a challenge. If players like Vardy, Mane or Sakho were to pick up serious injuries then that would throw the hammer in the works for their clubs.

Look at Man City and Liverpool who without Aguero and Sturridge respectively have lost that attacking threat in front of goal which has seen a mixed bag of results and, as a result, Liverpool replaced Rodgers with a manager that earned respect for the work he did with Dortmund, Jurgen Klopp.

Chelsea is the biggest surprise at the moment languishing in the lower reaches of the table with the pressure mounting on Mourinho after problems on and off the pitch. All the talent that they have and they are just not coming together as they did as champions last season. Costa is getting angrier with every match and injured Falcao looks to be another waste of time and money. Maybe they should replace Jose with Moyes, who is now a free agent after his sabbatical in Spain.

What about United, well overall we have to happy with the way things have gone so far. Sure there was another early exit from the League Cup, but sitting in fourth place where if results go our way after the break we could be top going into December and one win away from the knockout stage of the Champions League it’s hard to complain, but complain we do.

There is still something lacking from van Gaal’s style of play or his football philosophy that just doesn’t seem to have clicked yet. There has been no settled system and recently he has reverted to a 4-4-2 formation that has paid dividends and one in which the players seem to prefer.

There can be no complaints about the defence. Once De Gea agreed on a deal and returned to the side in place of new keeper Romero plus the leadership qualities of Chris ‘Mike’ Smalling they brought stability to the rear guard. This has been proven by the fact that they haven’t conceded a goal in the Premier League since the defeat at Arsenal at the beginning of October.

Smalling’s partnership with Blind looks solid enough, however a new experienced centre-back will still be needed either in the January transfer window or in the summer to free up Blind for the midfield. Luke Shaw’s injury was a huge blow as the England youngster was enjoying a great start to the season compared to last year. Rojo seems to be the best choice for cover at left-back.

On the other side Matteo Darmian proved what a great buy he was with outstanding displays at the beginning of his debut season, however, he does have a habit of picking up yellow cards and that has been proven to be slightly disturbing as during his recent ban the only choices were Valencia and now winger Ashley Young.

It’s in midfield where van Gaal enjoys an abundance of talent to choose from with new summer additions Schneiderlin and Schweinsteiger adding the bite in the middle that had been lacking since the days of Roy Keane. Along with Mata, Herrera, Fellaini, Young and Carrick it became clear that the manager couldn’t keep them all happy at the same time and in that respect Herrera, Carrick and Fellaini have spent the most time on the bench.

What is evident is that van Gaal leans towards the partnership of Schweinsteiger and Schneiderlin in the middle with Mata given the nod ahead of Herrera to take up a more forward position.

However, it’s those forward positions that have provided the major talking points this campaign as even though clean sheets are a regular event at the back the distinct lack of goals has provided the manager with his biggest headache.

The fans have started to vent their dismay by regularly chanting Attack! Attack! Attack! during recent matches. One thing that has to be said is that the manager has, to some extent brought this on himself by not reinforcing the attack before the season began when he offloaded forwards either for good or on loan.

One shining light has been the young French forward Anthony Martial who has been nothing short of a revelation since he was bought for a huge amount of money for a relatively unknown teenager, but since his debut goal against arch rivals Liverpool he has gone from strength to strength and seems to have settled into life at United very well. Even playing out on the left his skill and confidence with the ball at his feet is a joy to watch.

The same can’t be said of Memphis who has not enjoyed the same start to his United career. He has a bucket load of talent, but his form has been on the wane since Holland were eliminated from the upcoming Euro’s. I’m sure he will settle down eventually and get his head around what is expected of him and will end up a true star at the club.

Fringe players have come to the fore already this season, none more so than Jesse Lingard. The Warrington lad has been at Old Trafford for 16 years and after loan spells he has patiently bided his time and boy has it paid off. A couple of scintillating man of the match displays topped off with a wonder strike against WBA has proven that patience is truly a virtue. The question is whether van Gaal will now give him a longer run in the side.

I suppose the main talking point of the season and one that has divided fans is the form, or lack thereof, of the captain Wayne Rooney. I think it’s important to look at what he brings to the team now and not to be blinded by his fantastic achievements for the club over the last decade or so. Rooney is a striker and his greatest talent is putting the ball in the back of the net as his records for both United and England show quite clearly.

Rooney is not a midfielder as he doesn’t have that quality you need to play in the middle of the park and whoever put that idea in his head a few years ago was plainly mistaken. Too many times this season play has broken down when he has dropped deep to such an extent that it has clearly affected the goals for column. Add that to the many times he has dithered when in front of goal and it is obvious something is not right with his confidence.

Van Gaal’s insistence that he will always play a skipper that is fit, has backfired so many times in matches that we should have won. The only performance of merit was when he played as the main striker away at Brugge and what happened? He scored a hat-trick.

At 30, sure his pace and overall play will not be on a tandem with the younger players, but he still has an eye for goal which means he should play in attack or not at all. Another position that will hopefully be strengthened when the transfer window opens.

As regards the manager I still think van Gaal needs one or two more additions to the side to get them where he wants them to be as even he has admitted that the lack of pace up front has been a problem. Also, he must instil in his squad that even though United are statistically among the best passing sides in the league they need to do it going forward rather than sideways or even backwards.

It would be great if he could continue to give chances to the younger players as he has been doing, most notably with Perreira and Lingard, along with bringing up young stars of the future from the U18’s even if it’s only to use them as subs to give them the valuable experience of being part of the first team.

The best home match was the victory over Liverpool in which we overpowered and outplayed Liverpool once again and the match saw a debut goal for a certain French striker.

The best away match had to be the victory over Everton at Goodison Park. After three straight defeats there it was a relief to see the team perform so well. There has not been many away games to cheer about but this win was one that lifted the fans and players as it was close on the heels of the 0-3 defeat by Arsenal.

Player of the season so far: Chris Smalling.

High of the season: The goal by Anthony Martial after coming on for his debut against Liverpool. The newest hero for the Stretford End.

Lows of the season: Luke Shaw breaking his leg and the opening 20 minutes at the Emirates.

I fully expect United to challenge for the title as they are currently in 4th position without yet hitting top gear and especially if van Gaal strengthens the forward line in January. As regards the Champions League I believe that it’s possibly a bridge too far this season, but will provide valuable experience. A longer run in the FA Cup would be a more realistic aim. Whatever the outcome my I hope is that we don’t end up empty-handed once again.