Where is Man United’s Flair? 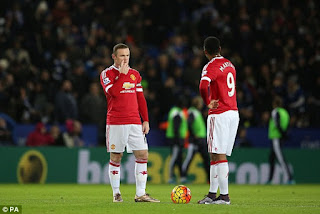 Champions are not only remembered for winning, but also how they won. So if United are crowned champions come May let’s hope memories are short as their style of play is laboured to say the least.

Boring has rarely been a word associated with the Red Devils, but this season United have been tagged with the negative label and if they continue to pick up points in the way that they have been doing, then the moniker will stick.

Sure, they are sitting in a prime position having played less than attractive football and it’s only a matter of time before the team turns on the style and start to thrash opposing sides, but is that going to happen with the present squad and the stifling system imposed on them?

Manchester United has been blessed down the years with teams that were renowned for their attacking prowess. Sides that the fans knew could turn a match to their advantage with a moment of brilliance that would have the faithful on their feet in awe of what that had just witnessed.

So many times in the past United would simply press and bludgeon the opposition into defeat through pure determination and grit. A never say die attitude by players who understood the meaning of defeat not just for themselves, but also the club and more importantly the fans.

Whilst the team have sorted out the defensive frailties of the last few seasons, it’s up front where the problems are paramount and need addressing quickly before it’s too late.

In releasing the majority of the forward players van Gaal, it has to be said, has left the attack threadbare and opposing teams no longer fear United as they did in the past.

Maybe the manager has a master plan which involves new personnel arriving in January that will add to the goal plus column in United’s season if not, then we can expect a struggle for goals for the remainder of the campaign.

With only two recognised strikers in the first team, the Reds have struggled to find the net. You only have to look at the lack of goals to understand that all is not right in attack.

Rooney has underperformed so far this season and has been poor in the games he has played to such an extent that you have to question his inclusion in the side at times.

Martial announced his arrival at the Theatre of Dreams with a blistering debut, however, even he has struggled of late. Memphis arrived amid a fanfare, but so far he has struggled with his confidence.

They are the only recognised strikers left at Old Trafford so it they pick up any injuries over the upcoming busy period let’s hope Woodward has the cheque book ready come January.

The big question is whether it’s the players fault or the manager’s philosophy that is to blame. In the end, it has to be the manager as it’s his tactics that determine how his side plays. Even he has admitted that the side needs to add pace up front.

United’s current place in the league has a lot to do with the unpredictable showing of the so-called big four combined with the resurgence of mid-table teams. We are where we are due to the likes of Smalling and De Gea who have literally saved the team from the jaws of defeat with some outstanding displays.

For a club that is steeped in history with great foraging wingers, United is resigned to playing with an attack devoid of wing play. It’s a sad state of affairs when they resort to hoofing the ball into the box looking for the head of the tallest player in the side, hoping something will come from it or try in vain to create chances through the middle against sides that have eleven players behind the ball. It has all become way too predictable.

To watch legend Ryan Giggs sat unanimated on the bench during matches begs the question what does he make about the way his beloved United have resorted to this style of play and how much of his input actually resonates with the manager.

The failure to defeat Middlesbrough in the League Cup and also not clinching victory over PSV must have raised eyebrows about the tactics behind closed doors, or did it?

It’s clear that Louis van Gaal is his own man and has an agenda, but at the moment he is in danger of losing the support of the masses unless he can turn the situation around and quickly.

United are a club that has been built on fighting adversity and now is the time to turn back the clock and find the old spirit of attacking play If they are to prove the doubters wrong.

Written by Editor
United Plucked By The Cherries.
Manchester United’s Season So Far.