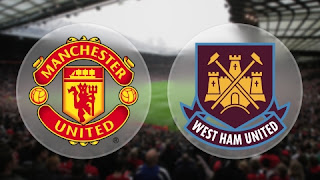 Man United’s bubble was burst by the Hammers. United were dealt a hammer blow by West Ham as they were held to a draw at Old Trafford.

This was the sixth goalless draw in a season that is rapidly raising concerns about United’s ability to score goals.

With two more players admitted to the Carrington casualty department van Gaal had to reshuffle his pack once again. Rooney and Rojo joined the ever growing list of injured players this week, which makes the upcoming transfer window all the more crucial for the strengthening of the squad.

United aimed to protect their unbeaten home record in the league this season against a West Ham side with a proven pedigree away from home, having already collected the scalps of Arsenal, Liverpool, Man City and Chelsea. Quite clearly this was in no way going to be a pushover for the Red Devils.

The United starting XI wasn’t much of a surprise given the players available to the manager: De Gea, Darmian, Smalling, Blind, McNair, Schneiderlin, Schweinsteiger, Fellaini, Mata, Lingard and Martial.

McNair kept his place at the back and birthday boy Martial was given the main strikers role with Fellaini chosen ahead of Memphis to assist in the attack. So the home side would start with the much talked about plan B experiment devoid of any out and out wingers.

Varela became the latest player to be called up to the first-team squad and the defender was to start from the bench.

The absence of Rooney and with Carrick substitute, Smalling was was handed another opportunity to impress as the captain of the side.

The home side got the match underway at a windy Old Trafford and immediately went on the attack with Lingard pressing hard and both Darmian and Fellaini trying their luck with long-range efforts.

Darmian delivered a perfect cross which Fellaini met at the far post with a firm header that was only just deflected over the bar, but despite his protests, no corner was given. This was followed by a dreadful mistake by Blind as he carelessly gave the ball away as he came out of defence. The mistake gifted Moses a one on one chance with De Gea which the Spaniard managed to block superbly. A case of King David denying Moses after he had parted the red defence.

On the quarter hour mark, the ball fell to Martial on the edge of the six-yard area and his turn and shot looked goal bound until a defender managed to get a leg in the way and divert it for a corner.

Darmian and McNair looked the most impressive in the opening exchanges as their foraging runs down the wings and crosses caused problems for the away defence.

There was a scare at De Gea’s near post as a low cross was misjudged by the keeper and it hit his body then rebounded off another player onto the post and to safety then West Ham hit the post again following a corner. These were clear signs that United had to be on their toes in defence and take the chances at the other end when they came up.

Fellaini was by far the busiest player for United popping up here, there and everywhere but on thirty minutes he was lucky to escape a booking for a stamp on an opposing player’s ankle. That is one side of his game that frustrates the most the needless free kicks he gives away due to his, at times, reckless style of play.

United had a big shout for a penalty after Blind crossed into the danger area and it appeared Fellaini was pulled back as he prepared to shoot,  however, referee Clattenburg didn’t waver in his judgement of play on.

Two minutes before half-time van Gaal brought on Carrick for Schneiderlin which wasn’t clear at the time, whether it had been a tactical change or if the Frenchman had picked up an injury. It was revealed after the match that he had a knock to his hip and would be doubtful for the Wolfsburg game.

Half time and the match was locked at 0-0 with United once again in an uninspiring mood with little on offer in the way of attacking ideas and to be honest, they should have felt thankful for the woodwork that the visitors hit twice in quick succession and the new boots of De Gea that he used to deny Moses. 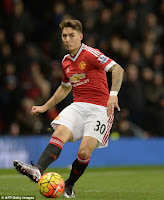 The Red Devils attacked the Stretford End in the second half as van Gaal was forced to make another change this time he replaced McNair, ankle problem, with Varela who was making his debut in defence. On a side note, he is only the second Uruguayan to play for the Reds after Diego Forlan.

With the only other attacking options being either Memphis or Young from the bench more would have to be expected of the midfield to generate chances in the second half as only one of them could be used.

The opening five minutes looked promising as United had a positive spell with Lingard firing over from the edge of the area.

It was West Ham, who had the first shot on goal as Zarate tried his luck but De Gea saved well. The same player missed a great opportunity to put his side ahead as his shot come cross was fired across goal.

The match had become deflated and the natives were becoming restless with the lack of verve from United.

Martial tried his best to boost the proceedings and deliver a goal on a plate for Fellaini but his close-range effort was saved well on the line by keeper Adrian.

Mata’s first effort on goal came in the 65th minute after great combination play, which involved Martial and Schweinsteiger, but the midfielder screwed his shot wide of the post.

Schweinsteiger almost reproduced his goal heroics of last week with a blistering strike that was only inches over the bar. That would be the German’s final contribution to the match as he was replaced by Memphis.

Following his introduction, Memphis immediately found himself in the thick of the action as he played in Darmian who put over an inviting ball across goal, but Fellaini, the closest player, made little or no effort to get on the end of it.

Fantastic wing play down the left that again involved Memphis and included a smart back-heeled pass by Fellaini provided Martial with a shooting chance but the ball swerved agonisingly wide. Then Lingard also tried his luck but his effort had the same result. At last the home crowd came alive as they encouraged United to keep on the attack.

Carrick took one for the team as he was cautioned for bringing down Noble as the visitors attacked on the break and that was quickly followed by a foul by Varela, who brought down Zarate on the edge of the box as the visitors looked to add another big name to their list of victims this season.

Captain Smalling had the last chance to become the hero of the day as he loitered in the penalty area only to see his flick towards goal cleared away from the danger area.

The match ended 0-0 and Man United had missed a great chance to move nearer to the top with yet another display of poor finishing in front of goal.

Both sides had the chances to win so a draw was probably the fairest outcome in the end. If United had finished smarter then it would have been a totally different story.

The last time Rooney missed a game Memphis held the front line to good effect against Watford but in this match he was overlooked in favour of Fellaini who ran around all day without contributing anything in the way of substance in the final third.

At this rate, it doesn’t bode well for the crucial clash against Wolfsburg in the Champions League in midweek or for that matter the busy period over Christmas. 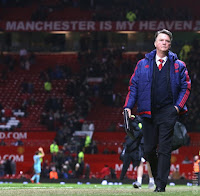 A lot can be said of the injury situation at the club, however, that only papers over the cracks in the style of play that is hindering United from blowing teams like West Ham away.

Gone are the days of exciting forays into the opposition half to be replaced by slower build up play that gives the defence time to organise therefore frustrate the United attackers and the fans.

Despite the loss of key players van Gaal was still able to field a strong enough side that should have been able to deal with West Ham the fact that they didn’t has to reflect mainly on his philosophy of play more than the player’s inability to find the win.

Excuses will be made, but the bottom line is that these displays and results are just not good enough for a team of Manchester United’s stature.

Written by Editor
United Plucked By The Cherries.
No Dutch Courage For United