Should van Gaal Face The Chop?

People called for the head of King Louis XVI in the French revolution because his power had become the hatred of the people. So is it time for Manchester United to dispense with the services of their manager?

This week social media was alive about whether Louis van Gaal had burnt his bridges at United and many wondered if he would become the latest managerial casualty after a poor week of results, but it was elsewhere that the hatchet fell as Chelsea decided that enough was enough and sacked, Jose Mourinho, to fire fresh speculation that the special one could end up at Old Trafford.

However, there is one problem with that scenario and that is we already have a manager and a proven one at that. Sure, the results haven’t been going exactly to plan, but to pull the plug on van Gaal’s tenure half way through the season could have worse repercussions for United’s present campaign.

Sitting in the top four and within only two wins from the top doesn’t count as a disaster just yet. If results are not forthcoming quickly, then the manager’s position will become unattainable come the summer, but to call for his head now could be a recipe for disaster.

Once his squad is back to full strength and he can be allowed to add to it in the January transfer window then there is no reason why the team can’t put a run together and challenge for the Premier league, FA Cup and Europa League. We have never been a team to back away from a challenge in difficult circumstances and now is not the time to start down that road.

Some may not agree with van Gaal’s philosophy, but at the end of the day he got us into this, therefore, he should be given the chance to get us out. There is only a handful of managers with the pedigree to manage a team the size of United and van Gaal is certainly among them. 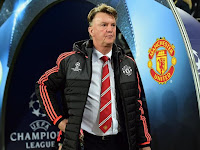 Everybody makes mistakes and granted many have been made. The biggest being United’s elimination from the Champions League, even the great Ferguson experienced that same fate, but he had the backing of all the fans to continue in the position and so should van Gaal, for now.

If at the end of the season there is nothing to celebrate then that will be the right time for the club to weigh up their managerial options and if they decide to begin next season with a new man at the helm then so be it. But for now, the most important thing is for all the fans to get behind the manager and the players even if they don’t agree with everything that’s going on.

The ball is firmly in the Dutchman’s court as he tries to get the team back on track and I for one am willing to stick my neck out and say that at the end of the season we will have something to shout about.

Do we really want to be one of those clubs that bows to pressure and take the easy option of wiping the slate clean? I think not.

Written by Editor
Audio: LVG getting angry from Media questions
United Plucked By The Cherries.