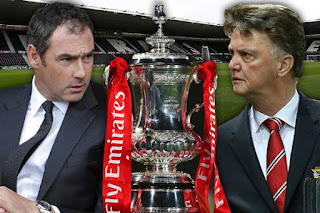 Will the FA Cup provide a welcome relief for Louis van Gaal or will it add to his woes?

Both Man United and Derby County will set their sights on the diversion of the FA Cup 4th round from their league campaigns as both teams had a torrid time last time out.

United, as has been well documented, lost at home to Southampton last Saturday and Derby had a night to forget as they were well beaten by Burnley away 4-1 on Monday evening. But as they say, league form counts for nothing when the cup comes around.

Derby has failed to win their last five league games and are currently lying 5th in the Championship, but having said that they will be well up for the visit of the Red Devils and will look to pile more pressure on van Gaal and his team, who are fairly easy pickings these days.

Manager Paul Clement will be hoping that his leading scorer Chris Martin can add to his season tally of 9 goals, all coming in the league, against United. The Rams overcame Hartlepool 2-1 in the 3rd round with goals from Butterfield and Bent.

Manchester United have always had a love affair with the FA Cup throughout their illustrious history and the way the season is taking shape it could be their only realistic chance of silverware in this campaign. However, they almost blew their chance in the 3rd round eventually needing a penalty from Rooney in the 93rd minute to break the hearts of a spirited Sheffield United side who were seconds away from a money spinning replay.

Van Gaal has a lot more on his plate than his Derby counterpart. The main problem is getting the fans back in his corner, however, judging by social media that could be way too late. Also, he has to get his team back to the style of play that has been missing in his time as manager as it’s not just the fact that his team are losing matches and points it’s the way they are doing it. Last weekend the players’ body language said it all after the latest defeat as they trudged off the pitch to a chorus of boos.

United’s tactics have to be to kill the game off as soon as possible and in doing so silence the home crowd. To do this they will have to score in the first half, something they have struggled to do this season. If they don’t then it will quickly become a cauldron of a typically boiling hot cup atmosphere that could make the away team feel the heat and just want to escape the kitchen. A lot depends on which United turns up at the iPro Stadium. Will it be the team that won at Anfield or the nervy version that lacked ideas and confidence against Southampton?

The Red Devils can take heart that their record against The Rams in the FA Cup is respectable, having played 9 won 6 drawn 1 and lost 2. The last victory came in the 5th round in 2009 when United ran out winners with a scoreline of 4-1. On target that day was a certain Ronaldo, how van Gaal would love to have a player of his quality in his team during these difficult times

The biggest advantage United will have on their side on Friday evening will be the tremendous away support that has followed the team around all season and have wholeheartedly got behind the players even through the bad times.

Here’s hoping United can use this game to turn their fortunes around and not slip on the latest banana skin that could become the final nail in van Gaal’s almost completed coffin.