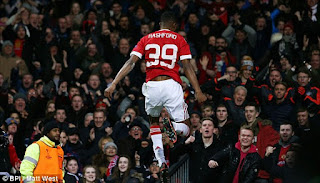 I’m sure almost every Manchester United fan has dreamt about scoring the winning goal in front of the Stretford End to earn the Reds a vital victory. Well, imagine not only doing it once, but twice.

Marcus Rashford must have been pinching himself the morning after his dream debut against Midtjylland as he realised exactly what he had achieved. Not only had he helped his side into a mouthwatering last 16 clash with arch rivals Liverpool, but he had also put his name in the record books as United’s youngest scorer in European competition an honour previously held by the one and only George Best.

Not bad for a local lad who thought he would be on the bench hoping to get a run out for the last few minutes. Fate has a strange way of showing its hand.

It has been a season in which United have had to rely on the youngsters at the club to help out the first team due to the heavy loss of players due to injury and boy have they risen to the challenge. Jesse Lingard is the main example, a product of the United system, he has enjoyed an extended run in the side and has not let himself down not only performing well but contributing with five goals.

The main positions that have needed the most cover have been in the full back spots and they have been admirably filled by the likes of Cameron Borthwick-Jackson, Donald Love, Guillermo Varela, Joe Riley and a late cameo by Regan Poole against Midtjylland.

In attack, James Wilson obviously didn’t grab van Gaal’s attention and was allowed to join Brighton on loan and it was a surprise that the manager recalled Will Keane as cover in the attack in place of Wilson. Andreas Pereira has been used fleetingly but has been involved in the full squad set up for a while.

And that’s the main point getting the young players involved as much as possible with the first team. They might not play every week, but the fact that they are training and travelling with the more experienced players is a crucial component in any young players development. It’s imperative they learn how to be a Manchester United player on and off the field.

In the first leg in Denmark and against Shrewsbury in the FA Cup, there was a bench full of academy and reserves, including the recalled from loan goalkeeper Dean Henderson as cover for Romero. Valuable experience even if they didn’t manage to get involved in the matches. 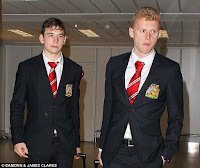 It’s been a mixed bag for the academy teams this season with a change in coaches after a poor season, which saw Paul McGuinness depart after years involved in the progress of many players.

With former graduate of the famous class of ’92 Nicky Butt now in charge of the academy it guarantees that the young starlets’ feet will remain firmly on the ground as he will lead by example and ensure his young charges do not get carried away with the fame that will surely come their way.

The reserves have had a better season sitting pretty at the top of their league and it’s that side that has provided the main cover for the first team. With the likes of James Weir receiving rave reviews for his overall contribution this season, it won’t be long until a few more young stars of the future will be knocking on the door of the first team.

Many negatives have been said and written about Louis van Gaal’s tenure as manager of the club. However, one thing is for sure he has not been afraid to give the youth a chance. It can be argued that as he didn’t sign covering players in the transfer window then he has had little or no choice but to turn to the youngsters.

The main thing is once they have been given the go ahead the players have responded well and at no point seem overawed by the step up to the first team. It’s so refreshing seeing them clearly enjoying themselves and obviously playing for the club rather than their wallet and long may that enthusiasm last.

It looks like the latest batch of young talent off the production line is bright at Old Trafford and long may the tradition of nurturing talents like Rashford, Lingard & Co. continue to flourish for many more years to come.