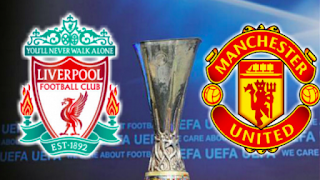 They are the two biggest rivals and also the most successful teams in English football, but now they come together for the first time to fight it out on the European stage.

The Europa League could prove to be the only way for one of these sides to gain entry into next season’s Champions League as both teams look more and more likely to be failing in their bid to finish in the top four of the Premier League.

Of course, both United and Liverpool have a rich history of playing at the highest level in Europe which, goes back to the days of Busby and Paisley but now the situation both clubs find themselves in is a little foreign, to say the least.

Having to rely on the poor relations cup to gain access to the top table of European football is not an ideal position to be in. However, that’s how it is after another fairly lackluster season for both sides.

There are many reasons as to why both teams have underperformed this campaign and no amount of excuses can appease both sets of fans who not only expect, but demand their clubs are fighting for the league each campaign, especially United.

During the present campaign Van Gaal has given so many youngsters the chance to show their worth as his side has been hit by injury after injury and it could be those same youngsters who will have the huge responsibility to carry United through to the quarterfinals when more regulars should be available to add strength and valuable experience to the team.

Van Gaal has endured a torrid time of late and if he is to get any respite from the fans he has to get it right over the next two ties. He can fall back to a degree on his record of having won all of his matches against Liverpool in his time as United manager including the latest 1-0 victory at Anfield. But in Klopp, he will come up against a manager who is known for his ability to motivate his players.

Maybe the outcome is too close to call. However, there is one guarantee and that is the fans will definitely be on top of their game as this match gives both sets of supporters the chance to vent their hatred towards each other. It really doesn’t matter what the competition is the only outcome expected is a victory at any cost. Losing would not only cast a shadow over the clubs, but would be unbearable for the fans especially on social media.

If I was to stick my neck out, I believe that United will prevail as the second leg is at Old Trafford which offers the slightest of advantages for the Red Devils providing they can, at least, come away from Anfield with a draw and a vital away goal. Having said that, one thing has been certain this season and that is trying to predict van Gaal and his team’s results is nigh on impossible.