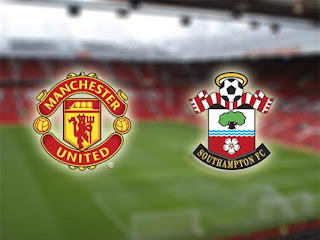 Following the euphoria of grabbing all the three points from Anfield, it was back to home with a bang for United as Southampton inflicted a defeat on the Red Devils that could have a huge reverberating aftershock on the club.

United were looking to continue their unbeaten start to the year, an unbeaten start in which the results have glossed over the performances which to be honest have been well below than what is expected at United.

There was more bad news on the injury front as van Gaal revealed that Ashley Young will be absent for ‘a long time’ with an operation expected on his groin problem. The Dutchman actually admitted that it might force him into the transfer market if the right player became available.

Add to that the missing Schweinsteiger, Jones and Carrick and the team selection had a familiar look to it: De Gea, Darmian, Smalling, Blind, Borthwick-Jackson, Schneiderlin, Fellaini, Herrera, Rooney, Lingard and Martial.

The only change from the victory over Liverpool saw young defender Borthwick-Jackson given a chance to start in place of Young. Mata was once again demoted to the bench with the unpredictable Fellaini given the thumbs up by van Gaal to start.

The last time that United beat Southampton at home was back in 2013 in a 2-1 victory that included a double from Rooney and if he could manage the same feat in this match he would reach 100 Premier League goals at the Theatre of Dreams.

The visitors got the game underway with their latest signing Charlie Austin on the bench.

Could United manage something they had only achieved once in their last eleven matches at Old Trafford and that was to score a goal in the first half? Their first effort came in the eighth minute when Martial’s tame shot squirmed woefully wide of the post.

It was clear that the Saints had come with one plan in mind and that was to defend then look to counter pretty much as every team has done this season to thwart United.

Blind tried his luck from distance with a shot that had the power, but not the accuracy to get past Forster in the Saints goal. Herrera managed to get on the end of a through ball inside the opposition area but failed to get the ball under control. At last, the home side had lifted the tempo which had the desired effect on the home fans as they started to get behind their side.

Rooney had a blast wide in the 20th minute as it looked increasingly like it was going to another barren 45 minutes if they continued in the same vein. Because of this Southampton grew in confidence as the half progressed and started to play higher up the pitch seeing that United was lacking in ideas up front.

Lingard was having another poor outing and even the mercurial Martial looked particularly jaded. Herrera was trying his best to generate some forward momentum that had the fans chanting his name.

After half an hour it had been another frustrating display by United who distinctly looked void of ideas. Saints striker Mane slipped through the home defence and had a great chance to put the visitors ahead but thankfully for the home side, he completely missed his kick with only De Gea to beat.

Five minutes before the break and the boos could be heard aimed towards the manager more than the players after what has to be said was an awful display and the body language of some of the players spoke volumes about their own dismay at their lack of creativity. It was all a case of hit, hope and see.

Half-time and no surprise at the scoreline of 0-0. What can be said that hasn’t been said before about United’s inability to produce the goods in the opening 45 minutes of a match this season. Nothing.

Last week at Anfield it was reported that the players had a shouting match at half-time in which some home truths were laid out on the table. One can only hope that the walls inside the home dressing room were vibrating from a similar tirade this time around.

United got the second half underway as they attacked the favoured Stretford End with an immediate change that received the biggest roar of the day when Mata replaced the ineffective Fellaini.

Mata had an immediate impact by spraying a great ball into the path of Lingard down the right wing and his through ball almost picked out the forward run of Rooney. Mata’s introduction seemed to have the desired effect not only with his teammates but also the crowd.

Rooney and Martial almost combined to open the scoring but the ball failed to sit right for either of them. This was miles better from the Red Devils.

United’s passing was crisp and they had an air of urgency about them that was distinctly missing in the first half. Still the danger from the visitors hadn’t disappeared and Darmian took one for the team as he was unceremoniously clattered by Long as he cleared a dangerous cross. The Italian clearly couldn’t continue and had to be replaced by Paddy McNair. Yet another casualty added to the already lengthy injured list.

The lengthy delay in the match for the injury to Darmian came at the wrong time and definitely disturbed United’s drive as they took their time to get back into the attacking rhythm. It was Southampton who had a couple of close chances from two corners that had the watching home fans holding their breath. The visitors were getting closer.

McNair almost played Lingard through on goal with a ball that would have been the pass of the match, but it was slightly overhit even for someone with Lingard’s pace.

The game had totally opened up as Southampton had the belief that they could pull off a win against a United team devoid of confidence or imagination.

As the match entered the last ten minutes everything about United’s play had become stale with absolutely no efforts on goal or a sense of urgency from the home side.

A cheer rang out for Borthwick-Jackson when he made way for Januzaj. However, the first action the returning Belgian was involved in was to give away a foul in a dangerous area. When the ball was delivered there was the unmarked debutante substitute Charlie Austin to power home a header to pour more pressure on van Gaal and his team. The striker was left free in the area once Schneiderlin decided to leave him alone to help out McNair.

There was a late flurry by the home side as the referee added five extra minutes to the clock, but apart from an off-target effort from Januzaj United offered nothing in response to the visitors goal.

It ended 0-1 but it’s not the defeat that hurts the most it was the way it was lost. All the staff at United have to take responsibility for the way in which this famous club has been transformed into a side that isn’t feared by any team.

Apart from a ten-minute spell at the start of the second half, this was yet another dismal display by United that left the watching faithful bemused and bewildered at not only the way they played but in the manner they went about it.

This was not a case of a bad day at the office it was deeper than that. Not one player performed to anywhere near a level that is expected from a United player. They looked devoid of ideas and demoralised in their general outlook on the pitch.

The name Manchester United doesn’t automatically earn you the right to win games that right has to be earned and that is just not happening at the moment. Fingers of blame will be pointed, but in the end they have to be directed at the manager and his coaches.

It’s not just the first team that has questions to answer as the U18’s suffered a demoralising 5-1 defeat at the hands of Chelsea in the FA Youth Cup 4th round. It seems all is not well with the youngsters as they have struggled in the league having lost ten games on the bounce.

For a club that had been built on a proud youth policy, this cannot go unnoticed as it has been a long time coming. The traditions have been slowly ignored and left to be run down in recent years and it is a situation that has to be addressed and quickly. I wonder what was going through Sir Bobby Charlton’s mind as he sat in the stand watching the young Reds capitulate as easily as they did.

Where does the club go from here?

Written by Editor
United Up For The Cup.
Rooney’s Belter Beats Liverpool