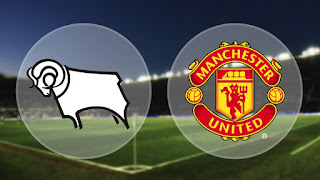 The darkest week in Louis van Gaal’s tenure as Manchester United manager ended on the bright side as his team booked their place in the draw for the FA Cup 5th round with a resounding win against plucky Championship side Derby County.

Following a torrid time in the press and on social media, it was imperative that van Gaal and his side answered their many critics by putting on a performance that was more akin to a United side than had been witnessed last weekend against Southampton.

To do so, the manager made two changes to his starting XI by replacing the injured Darmian with Varela and he dropped Herrera to the bench in favour of Mata. Line up: De Gea, Borthwick-Jackson, Smalling, Blind, Varela, Schneiderlin, Fellaini, Mata, Lingard, Rooney and Martial.

Fellaini was once again van Gaal’s preferred choice to partner Schneiderlin in midfield and it would be interesting to see if the Belgian would cause havoc to the Rams’ defence or be the hindrance to his own side that he sometimes is.

Derby got the tie underway amid an electric atmosphere inside the iPro Stadium, with the away supporters numbering almost 5,500, once again in superb voice.

Martial had the first chance of the match when he was played into a shooting chance by Rooney, but the French youngster curled his effort high over the bar. The idea was right only the execution was all wrong.

The opening exchanges belonged to United as they had an encouraging start by bossing the play and not allowing the home side anytime on the ball. In fact, Derby’s first effort on goal came in the tenth minute when a shot from Christie was easily collected by De Gea.

Then just after the quarter hour mark, up stepped Rooney to give United a rare goal in the first half of a match when he collected a pass on the left-hand edge of the area from Martial, then as cool as you like he curled a superb effort wide of the despairing dive of the keeper into the opposite corner. Although there was the slightest hint of offside in the build-up nothing can take away the brilliance by Rooney and a lead fully deserved by the away side.

Exactly the start United had hoped for. Now could they keep control of the game and hopefully find the second crucial goal to kill the tie off?

Derby to their credit did try and hit back immediately after falling behind with a header inside the area from Blackman that required De Gea to save at full stretch. One player who was bossing the play on the quiet was Schneiderlin as he made sure that his side didn’t lose the ball in midfield.

It could and should have been 2-0 when Martial collected a return pass from Mata, but his first touch was too heavy as he bore down in the area.

Eight minutes before half time the iPro Stadium erupted as Thorne levelled for the home side to make a dent in all the hard work United had put in. A goal totally against the run of play and one where Thorne controlled the through ball well before evading the United defenders and poking the ball past De Gea.

Man United responded positively and a few minutes later Martial had a low shot somehow cleared from danger by the Derby defence and De Gea was grateful to see a long range effort from Blackman flash past his post.

The Reds had a good shout for a penalty after Martial’s tracker seemed to handle the ball inside the area while making a tackle on the United forward.

Cup tie well and truly on as it was all square at half-time and it was Derby who ended the half with their tails up after the equaliser had given them a new sense of belief.

United had done everything that was expected of them, but once again came unstuck in one moment of hesitation at the back that allowed the Rams back into the game. But it was Martial who had caused the most damage to Derby with his spirited attacks.

The question now would be how would the Red Devils react in the second half?

The away side got the second half started with no changes having been made by van Gaal and showed their intent by attacking from the off. The ever lively Martial made a run down the left and tried a cross come shot which evaded everybody.

As in the first half Martial was United’s main outlet in attack as the game was now all United with Mata coming within a whisker of a goal with a header back across goal from a Lingard cross.

Thrilling play as first Mata and Lingard combined well inside the area, then Martial found the ball tied up between his feet in the crowded area and was unable to get away a shot.

Derby was somehow hanging on as United poured forward seeking the second goal with Varela providing the outlet down the right and Martial doing the business on the left with Lingard and Mata utilising their pace and guile respectively.

All that effort paid off in the 65th minute when Blind smashed the ball into the back of the net from close range as he latched onto a great cross from Lingard to restore the lead with a blistering finish. Exactly how he found himself in the most forward position only he will know but thankfully he was.

Close attention still had to be paid to Derby’s attacks and full concentration would be needed for the last twenty minutes of the tie.

Van Gaal made his first change of the match by replacing the impressive Schneiderlin with the fit again Carrick.

The final nail in Derby’s coffin came with seven minutes left on the clock as Mata finished off the hard work done by the man of the match Martial with a low left-footed drive into the bottom corner of the net. Fantastic play by the young Frenchman to provide an assist of the highest quality which goes to prove what a true talent he is.

The goal was Mata’s last kick of the game as he made way for his compatriot Herrera, who would add fresh legs to the side for the final few minutes of the game.

The game was over as a competition following Mata’s decisive strike, but still Derby didn’t give up hope of salvaging some pride and if it hadn’t been for a couple of errant shots they could have.

Full-time and it ended 3-1 to United which was nothing more than they deserved with an attacking display and finishing not witnessed for a long while. Most importantly, it was a potential banana skin avoided by the Red Devils and one that they will hopefully take into their next game in midweek at Old Trafford against Stoke City.

The star of the show was Anthony Martial who gave the home defence a merry dance every time he attacked and his footwork and vision is a wonderful thing to witness in a player so young. The good news for United, but bad news for opposing teams, is that Martial will only get better and when he moves into the middle as the leading striker then the side will truly reap the benefits of his immense talent. It was just a shame he couldn’t find the goal to put the icing on top of his endeavours.

Another star of the night had to be the fantastic away supporters who never gave up singing and encouraging the United players to keep on the front foot. It’s often overstated that fans can be the 12th man for a team. However, our travelling fans have to be the best as they continue to blast out their chorus of chants at every away stadium up and down the country and they, more than anybody, deserved this result.

So, United are the first side into the bag for the 5th round draw. Whisper it quietly but could this be the season to win back the old trophy?