United Stoke Up The Fire 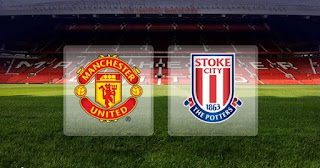 Man United turned on the style against Stoke City with a display that had United’s proud name written all over it and one that just might be the springboard for a surge up the table.

Following their decisive victory over Derby County in the FA Cup for United, it was back to the bread and butter of the Premier League with the visit to Old Trafford of former Red hero Mark Hughes and his Stoke City team.

Stoke have been impressive this season and like many teams who are normally classed as mid-table fodder has performed way above their weight and pulled off some impressive results including the defeat of United on Boxing Day.

Louis van Gaal, still shadowed by rumours of an imminent departure, badly needed a home win to restore faith in his ability and that of his players. The side he selected had a couple of tweaks to it from the cup win: De Gea, Darmian, Smalling, Blind, Borthwick-Jackson, Carrick, Fellaini, Mata, Lingard, Martial and Rooney.

Carrick started in midfield allowing Schneiderlin to have a well-earned rest on the bench and Darmian returned to the line up in place of Varela.

United got the game underway attacking the old Scoreboard End and certainly looked up for the fight in the opening minutes with Mata coming the closest with a deflected shot from the edge of the area.

Martial continued in the same frame of mind from the cup win with some thrilling runs into the box from the left, which proved it was going to be a torrid night for his markers.

Rooney tried to get one more goal closer to Bobby Charlton’s record early on when he twisted and turned 25 yards out and eventually let fly with an effort that the keeper had to save at full stretch. Prior to the match Rooney was six goals shy of Charlton’s long standing record of 249 goals for the club. A record that judging by the captains’ form in January won’t be around for too long.

After ten minutes the home side looked comfortable enough and played the ball around well up front as they bided their time looking for a way through the visitors defensive line.

Then in the 14th minute, Jesse Lingard produced the goods following fantastic work on the left involving the trio of Martial, Mata and birthday boy Borthwick-Jackson, who delivered a pin point cross into the six-yard area where Lingard stooped low to gleefully head the ball into the back of the net.

Just the start the home side needed and it was almost followed up by a second as Martial, clearly with the bit between his teeth, powered into the box and fired a shot into the side netting.

Stoke tried to get back into the match, but hit a dead end in the shape of David De Gea. But it showed that the threat of Stoke was clear and present and that United would need the cushion of a second goal.

Right on cue in the 23rd minute, they delivered with a sublime finish from the man of the moment Martial who curled in a shot from just inside the opposition penalty area to double the scoreline. A goal of superb quality from the young French star and the composure he showed to convert his chance proves exactly what an awesome talent he is.

The goal had United of old written all over it as Mata collected the ball high upfield and proceeded to take out two defenders with a superb piece of skill, then delivered a pass infield to Rooney, who in turn looked up and found Martial with a high quality ball from one edge of the box to the other.

Mark Hughes knows a good striker when he sees one and following the second goal the Welshman reshuffled his defence by bringing on ex-red Phil Bardsley to try and get to grips with the French terrier.

Mata and Rooney got in each others way as they both went for a cross from Darmian and it was the Spaniard who met it but headed wide.

With United enjoying a comfortable lead for the first time in a first half at home since September the game became a little flat with United just happy to play the ball around and didn’t allow the visitors the time needed on the ball to present any major threat on De Gea’s goal especially with the duo of Smalling and Blind standing their ground at the back.

Half-time and United fully deserved to be leading at the break and it could easily have been by a higher margin. There was an assured look about the Red Devils that has been missing for a long time and one hopes that the corner has been turned and the team can build on the new found confidence and go onto to kill off Stoke in the second half.

The second half got underway with no changes having been made by van Gaal as the rain fell around the Theatre of Dreams. But even that couldn’t dampen the spirit inside the stadium as United attacked the Stretford End that was resplendent with its tributes to the Munich air disaster victims.

Within four minutes of the restart, Rooney muscled his defender off the ball with a good old-fashioned shoulder barge and proceeded to fire the ball into the net, however, referee Roger East called the play back after he adjudged Rooney’s challenge as a foul.

This decision fired up the captain and in the next attack in the 53rd minute he got his just rewards by firing United into a 3-0 lead. The move was once again started by Mata who caressed the ball wide to the waiting Martial who played a wonderfully weighted cross into the grateful path of Rooney, who tapped home from close range to continue his great goal scoring run since the turn of the year.

The goal was another example of the smooth passing style that United have been missing for the majority of the season and one that delighted the home bench as even van Gaal showed a glimmer of emotion as he chatted with fans sat behind him.

The only black spot on Martial’s night came when he received a booking for a foul on Bardsley after he chased the defender down after not being awarded a free-kick himself. This tussle continued between the two for the next few minutes with the referee keeping a close eye on them both.

It was pleasing to see the experienced calming influence of Michael Carrick back in the engine room alongside Fellaini as both worked hard to thwart most of the Stoke forays through the middle as Stoke tried in vain to find a way back into a match that had slipped away from them.

Both Darmian and Borthwick-Jackson had the confidence to charge forward down their respective flanks and put over some decent crosses. Smalling and Blind stood tall all match against the threat of Stoke’s bulky striker and Ibrahimovic look-alike Arnautovic and the lanky, ineffective Peter Crouch, both of whom hardly had a sniff at goal.

With the game won van Gaal decided to freshen the side up for the final ten minutes of the match when he introduced Memphis for the brilliant Martial who received a standing ovation from the Old Trafford faithful and deserved to be named the man of the match following his display. This was quickly followed by the second change when Fellaini, who looked to be nursing a knock, was replaced by Herrera.

Memphis almost grabbed a goal that would have done his confidence the world of good, but his effort sailed wide of the far post after great movement and one touch passing build-up play by his teammates.

The third and final change for United came with only three minutes left on the clock when Pereira entered the match for the industrious Juan Mata who played one of his best games in the number 10 position where he was at the center of everything United did in attack.

Full-time and a resounding win for United in what could have been a tricky fixture. Three goals and a clean sheet plus the way in which the players performed showed that if they continue in this form, then a top four finish is definitely on the cards. Especially when you consider the scoring form of Rooney, seven goals in as many games, Martial’s huge contribution to the attack, Mata providing the build up play and a defence that is holding strong.

The important win has to be the best home display of the season and long may it continue starting with Chelsea at Stamford Bridge on Sunday. When attacking at pace, as they did in this match, not many defences can handle United’s attacking force and it was pleasing to see the players enjoy the freedom they had been given, but it begs the question why they hadn’t been able to perform like this all season?

This coming Saturday will be the 58th anniversary of the Munich air disaster a date forever linked with our great club. The Flowers of Manchester and their legacy will live on through present and future generations of fans as a symbol of the eternal flames of Manchester United.

Written by Editor
United’s Hopes Dented By Chelsea.
United Up For The Cup.