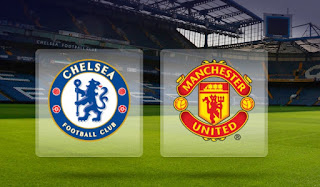 Diego Costa’s goal in added time salvaged a point for Chelsea as United looked to have done enough to earn a hard fought win at Stamford Bridge.

Even with United lying in fifth place and Chelsea sitting in the lowly position of thirteenth, this is still one of the biggest clashes in the Premier League and as a spectacle it didn’t disappoint.

Since they last met six weeks ago both teams have had a slight improvement in their fortunes, but are both still struggling to find the rhythm needed to surge further up the table.

The selection meant youngster Borthwick-Jackson would continue to gain valuable experience at the back while Carrick and Fellaini continued together in midfield and the quartet of Mata, Lingard, Rooney and the ever impressive Martial were given another chance to prove their quality together up front.

With Rooney edging ever closer to Bobby Charlton’s all-time scoring record of 249 the emphasis had to be for him and his teammates on an all out attack against a Chelsea defence who have struggled for form this season.

Chelsea got the game underway with the fantastic away fans making the loudest noise inside the stadium.

United started the brighter of the two sides with Borthwick-Jackson proving he has crossing ability by delivering a superb ball into the box that unfortunately evaded everyone. Positive play from the away side.

With Darmian providing an outlet on the right United seemed to have a good balance in attack. It was that youngster Borthwick-Jackson, who had the first speculative effort on goal from distance which lacked power. However, it showed the confidence is growing in the full back.

Five corners in the opening eleven minutes showed exactly how dominant United had started the game. They just had to turn that dominance into goals.

Carrick tried his luck with a low drive that didn’t really trouble Courtois in the Chelsea goal, but at least, United was having a go.

The home side hardly had a look in during the opening fifteen minutes as United were first to every loose ball and when they did manage to string some passes together the away side harassed them into mistakes.

Martial and Mata combined well on the left and the French striker let loose with a drive that the keeper had to dive at full stretch to tip the ball past the post. A brilliant strike and save to match.

Mata was clearly enjoying his return to his former stomping ground as he pulled the strings in most of United’s attacks.

Daley Blind was certainly getting plenty of practice taking corners from the left and right, but couldn’t find the killer ball and most were aimed at Fellaini who failed to make contact with any of them.

It was Diego Costa’s first ever match against United and his frustration began to boil over as decisions didn’t go his way. 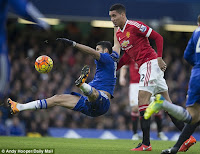 In a rare corner for Chelsea, De Gea pulled off a fine reaction save from a Magic header. United would have to be on their toes as the home side slowly got their game together.

Costa came the closest for Chelsea just after the half hour mark when he dragged his shot wide of De Gea’s far post this was then followed by a chance for Oscar who blasted a good chance over at the near post.

United’s play had gone slightly off the boil as they let Chelsea see more of the ball and their high tempo of the opening twenty minutes had disappeared.

The one time Fellaini did manage to connect with a Blind corner, he could only direct his effort wide.

A cross from Darmian two minutes from half-time only needed the slightest of touches from Rooney to give United the deserved lead, but he couldn’t quite get to the ball in time. Then the play switched to the other end where there was a huge claim for a penalty as Terry’s snapshot seemed to hit Blind’s arm. Thankfully referee Oliver only awarded a corner.

Half-time and it’s a little surprising that it ended goalless as both sides had more than their fair share of chances to score if not for the brilliance of the two keepers at either end who both made some fine saves.

Chelsea had to be the happier of the two teams as they made their way down the tunnel as it had been United who enjoyed the majority of the play. The visitors could have been down to ten men and a goal behind if the referee had awarded the penalty against Blind in the last minute. However, they must have also felt aggrieved not to be ahead at the break after a commanding half that included ten corners to the hosts three.

United started the second half with the same eleven hoping to get only their sixth win at Stamford Bridge in the Premier League.

The Red Devils started at the same pace as they had in the first half with both Rooney and Martial coming close to breaking the deadlock as United forced the pace.

Lingard was the next to test Courtois with a shot from the edge of the area and the keeper was equal to the task with another fine save.

There was a lengthy stop in play as the Chelsea defender Zouma fell awkwardly after trying to attempt a clearance. The young defender was stretchered off clearly in a lot of pain. Let’s hope it’s not too serious. The delay in play would have a significant bearing on the result.

Then on the hour came a goal of pure class from Jesse Lingard that even had van Gaal jumping out of his seat. Standing on the edge of the area with his back to goal Lingard controlled a ball that was crossed by Borthwick-Jackson and was touched on by Rooney.

In one fluid movement Lingard spun and smacked the ball on the turn into the top corner of the net and this time, Courtois had no chance. A brilliant strike from a player on top of his game and a goal United fully deserved.

De Gea was at his world class best as he saved at his near post from a strike by Ivanovic. A truly instinctive save from the keeper. He then followed that up with another stop this time from Fabregas at the other post. It looked like nothing was getting past him today.

Rooney tried his trademark overhead kick, but pulled it just wide at a point in the game that United would dearly have welcomed a second goal with fifteen minutes left.

With almost ten minutes to go in the match van Gaal made his first change by replacing Fellaini with Schneiderlin to provide a fresh pair of legs in the middle and the first thing he does is to announce his presence with a crunching tackle.

Chelsea tried their best during the last ten minutes by peppering the United penalty area with cross after cross, but the away defence stood tall to a man and blocked all that was thrown at them even if it meant bookings for Smalling and Blind.

Goal hero Lingard was replaced by Memphis for the final few minutes of the match and he received high fives from all on the bench.

Then in the first minute of the six added on Costa broke United hearts as he grabbed the equaliser after he rounded De Gea and placed the ball into the net. Borthwick-Jackson made a last ditch effort to intervene but to no avail.

The last throw of the dice by van Gaal was to make a change by introducing Herrera for Mata.

Costa almost rubbed salt into the wounds by adding a second at the death, thankfully for United De Gea stood his ground and made a point blank one-handed save low to his right.

Full-time and the game ended as a contest all square. Of the two sides, United will feel they should have taken all three points and will head back up north ruing their missed chances and allowing Chelsea to gain the momentum at the end.

The standout performance had to be from David De Gea who certainly prevented Chelsea from scoring on at least three or four occasions with top class saves, but was helpless to prevent their equaliser.

The way the top of the league is taking shape United need points as quickly as possible if they are to gain a top four finish as there is already six points between them and Man City in fourth. If they go about their upcoming fixtures in the same frame of mind as they did against Chelsea then they still have a chance of Champions League qualification starting with Sunderland away next weekend.

Written by Editor
United Fail To Deliver.
United Stoke Up The Fire