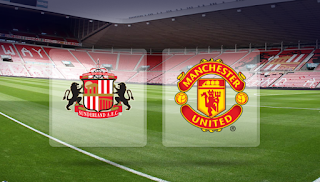 In a match that at least on paper United should have won fairly easily ended in a defeat which not only leaves top four qualification in the balance, but also throws fresh doubt on Louis van Gaal’s position as manager.

Outplayed, out-thought and outgunned by a Sunderland side fighting for their Premiership survival United offered little in the way of ideas of how to compete with the Black Cats.

Coming into this match United’s Premier League away record against the Sunderland was impressive, having played fourteen and won nine of them and having only lost one. So, a victory was definitely on the cards for the Red Devils bearing in mind the style of attacking play they had put on in the last three games and the fact that Sunderland has been struggling for most of the season.

Under new manager Sam Allardyce they have started to put a run of form together and pulled an unlikely draw out of the hat away at Anfield last week after falling behind by two goals.

The manager made only one change to the starting eleven and that was to rest Fellaini completely as he brought Schneiderlin back to the midfield to partner Carrick.

The surprises were on the bench as there were three youngsters called up to join the first team and they were defender Donald Love, midfielder James Weir and striker Will Keane who netted five goals against Norwich City last week in an under 21 match. In fact, the U21s are now leaders in their league above, ironically, today’s opponents Sunderland.

Sunderland got the game underway on a bitterly cold afternoon and before any of the players could get warmed up the hosts took the lead from a Khazri free-kick that went through everyone and caught De Gea off guard as he dived late and was unable to stop the ball creeping in at the far post.

Great start for the home side after only three minutes not so much for the visitors but there was still a long way to go in the match and more than enough time for United to put things right.

It was almost 2-0 for Sunderland after ten minutes when the ball was bubbling around De Gea’s six-yard area only for Defoe to thankfully miss kick his shot under pressure from Smalling.

United had played in some decent balls into the opposition area without being able to cause any worry to former red O’Shea and his defence. They were also guilty of giving away needless free kicks while attacking in the final third. So far, this was not the same United side that had performed well in the last three outings.

In the opening half an hour Sunderland was on top of the match and had created the better chances, including a fair shout for a penalty against Schneiderlin. It seemed that the wind had been knocked out of United’s sails by that early goal.

Mata had the first clear chance on goal for United with a snapshot from the edge of the area which was fired directly into the keeper’s hands.

Ten minutes before the break Darmian was involved in a collision with goalscorer Khazri which clearly caused the Italian defender immense pain in his right shoulder that forced him off.

Then all the away fans raised the roof as Anthony Martial scored a sublime equaliser five minutes before half time. It all came from a passing move that ended with Mata firing a rasping drive that the keeper Mannone could only parry into the path of Martial who dinked the ball over the keeper into the net. A lovely finish which brought United right back into the game.

Before the restart, Donald Love replaced Darmian at right back to make his first team debut for United. With his surname and tomorrow being Valentines day it could have been a writer’s dream for the headlines.

Half-time and it ended 1-1 thanks in no small part to Martial’s awareness in front of goal. His quickness of feet is a joy to watch and the way he executed the little chip over the keeper shows how much confidence he has in his own ability.

The equaliser was the only bright spark on an otherwise dull display from United and with Darmian leaving the play with a shoulder problem, it could prove very expensive indeed with games coming thick and fast. The players were well below par and would drastically have to lift their game in the second half.

United started the second half with two youngsters Borthwick-Jackson and Love in the full back positions and no further changes. 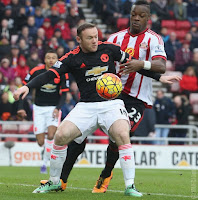 Rooney had been fairly quiet in the first half and started the second by having his name taken for a careless trip on Cattermole.

It was Sunderland who started on the front foot and Defoe almost caused Blind to score an own goal which gratefully didn’t happen as the ball squirmed past De Gea’s post with the keeper beaten.

Mata became the next United player to be cautioned after he had bamboozled himself lost the ball and tripped up the defender. To be honest, it was a harsh booking as the ref should have laughed it off along with everyone else. Then Carrick gave Marriner no option but to book him after he fouled M’Vila right under the ref’s nose.

Not a good start from United who were all at sixes and sevens and needed a straight head to guide them through this rocky period of play.

There was a very dangerous moment for United when N’Doye was put clean through the away defence and he struck his shot well when in a one on one position with De Gea but not for the first time this season the Spaniard stuck out his size 9’s and saved a certain goal.

On the hour mark van Gaal made a change in attack when he replaced Lingard with Memphis who was celebrating his 22nd birthday.

United’s passing had been terrible all day with Mata being the main culprit when in a forward position and Carrick comes a close second.

The Red Devils had De Gea to thank again as he pulled a save from his vast repertoire by tipping over a drive from close range by Kone. There are not enough adjectives to describe United’s keeper at the moment he really is on top of his game.

As the final ten minutes approached the visitors enjoyed a spell of pressure, which resulted in a string of corners that had no end result as the Sunderland defence cleared them all too easily.

Disjointed could be used to describe United’s play in this match as they looked at times like they had never played together before.

Van Gaal stated that Memphis had had his confidence boosted by his appearance for the U21s in midweek but that confidence was nowhere to be seen as he shot weakly towards the goal when he should have blasted it into the back of the net.

After being denied by De Gea earlier, Kone broke United’s hearts by putting the Black Cats back into the lead with a header that somehow went under the keeper’s body on the line. The winner was unfortunately put down as a De Gea own goal which was a shame as he had pulled off some fine stops prior to the goal.

Five minutes on the clock and with his side trailing van Gaal tried his last throw of the dice by replacing Schneiderlin with Keane in an attempt to save the game.

Memphis tried his luck with a curler that the keeper managed to punch away as United tried to save face. This was followed by O’Shea, who clearly hand balled a Memphis shot, but the referee only awarded a corner much to the disgust of Rooney and his teammates. There were a few shouts for penalties throughout the game and maybe Marriner felt he couldn’t award one when he didn’t give the others. 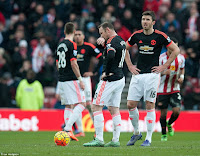 Full time and it ended in a 2-1 defeat that has left a very bad taste in the mouth. A result that has to go down as one of the worst of a season of many not so much for the fact that United lost against a team that has been struggling near the bottom all season but more for the fact that they performed so poorly.

United failed miserably to take an advantage in the race for a top four position with all the top four teams playing each other over the weekend. A victory would have seen United close the gap over City to just three points. However, once again van Gaal’s side just didn’t turn up for a fight.

There are only twelve Premier League matches remaining that will define United’s season and they will surely have a strong bearing on whether Louis van Gaal will still be at the helm come next season. Failure to finish the campaign in one of the coveted top four positions will only add fire to the rumours surrounding the impending arrival of the self-proclaimed special one Jose Mourinho.

There is a backdoor chance of qualification for the Champions League via the Europa League, which starts this week with a first-leg tie away in Denmark against Midtjylland.

The quandary for van Gaal and his team is how seriously they take the tournament as on the one hand, it’s the only European competition United have yet to win and along with the FA Cup it is their only realistic chance of silverware. On the other hand, a sustained run could hamper their league form through fitness and more injuries.