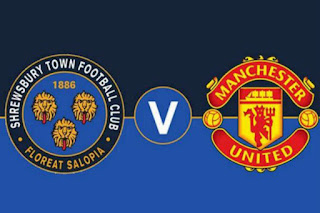 After suffering a humiliating defeat at the hands of FC Midtjylland in the Europa League here was a chance for van Gaal and his beleaguered side to put some passion and a semblance of pride back into their game.

Playing against the lowest ranked team still left in the FA cup and with a tasty home tie against West Ham awaiting the winner in the quarterfinals should have been incentive enough for the Red Devils to ease through the 5th round.

With so many players injured van Gaal once again turned to a mixture of experience and youth with a starting XI comprised of: Romero, Varela, Smalling, Blind, Borthwick-Jackson, Schneiderlin, Herrera, Mata, Lingard, Memphis and Martial.

United got off to a quick start in their changed strip of all white as they won a corner in the first minute. Blind’s delivery was met by the head of Smalling, but the captain’s header was over the bar.

Memphis tried a couple of long range efforts but each shot only just managed to stay in the small ground, which was bouncing with noise from both sets of fans. A true cup tie atmosphere.

It was after ten minutes that the Shrews keeper Leutwiler was first tested and that was from a low drive from Memphis that he managed to palm to safety. It was all United without the final punch.

Herrera tried his best to kick the ball out of the stadium, but failed as his shot only reached row W. Maybe he and Memphis had a side bet on who could belt the ball into the car park first.

After twenty minutes and the home side were holding out against United who just couldn’t find the killer touch to warrant all their possession. Same old story of the season. But even United would find it difficult not to carve out a clear-cut chance in the remaining seventy minutes, surely.

The away side were awarded a free-kick right on the edge of the penalty area which was taken by Memphis, but on the way to goal the ball struck the back of Martial’s head and went out for a goal kick. It looked like the ball was on the way to the corner of the net. It totally summed up United’s play at the moment.

Martial then almost turned the tie in United’s favour with a show of quick feet inside the area and a shot which was saved by the keepers legs then cleared off the line by Grandison. That was by far the closest United had come to taking the lead.

Then up stepped skipper Smalling in the 37th minute to do what his forwards couldn’t and scored the goal the team badly needed. It started with a strong headed challenge by Schneiderlin that fell nicely into the path of Smalling who had stayed upfield following a corner.

The defender showed calmness under pressure and struck the ball into the ground and on its way towards goal it took a deflection and looped into the goal. 1-0 ahead and you would expect the Red Devils to put this game to bed as soon as possible. They continued to attack and the pressure paid off right on the stroke of half-time.

It became 2-0 to United as Shrewsbury gave away another free-kick in a dangerous position on the edge of their area and, this time, up stepped Mata to deliver a perfectly placed shot bent over the wall and into the back of the net to put the tie beyond any doubt. There was a claim that three United players were standing in an offside position between the wall and keeper as Mata struck his shot, therefore it could be claimed they were obstructing Leutwiler’s view as he was rooted to his line.

Half-time and United were comfortably leading a tie they had controlled from the first whistle even if at times they had made it look more difficult than it should have been. 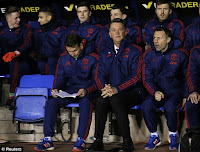 Shrewsbury had not troubled United at any time but had been fairly overzealous in some of their challenges which the referee would have to keep an eye on in the second half. The image of the half had to be the smile on van Gaal’s face when Smalling put his team 1-0 ahead.

United started the second half and van Gaal made one change to his side by giving a first team debut to young full-back Joe Riley who replaced Borthwick-Jackson at left back.

The away side picked up where they had left off in the first half by immediately going on the attack and caused panic in the home defence and won an early corner.

There were two close attempts on goal within minutes as first Memphis showed his determination with a run and shot that flew inches wide then Martial watched his close-range header go agonisingly wide.

Just after the hour mark, United sailed into a three-goal lead through a smart finish by Lingard, who put the ball away on the half-volley at the far post following a delightfully flighted ball by Herrera. The move was started with a huge throw out by Romero which caught the home defence well and truly on the back foot.

Within minutes of the goal wand with clearly an eye on two important games coming up van Gaal decided to withdraw Mata and replaced him with Pereira.

With twenty minutes left on the clock van Gaal made his final change of the match by giving Martial a well-deserved rest and put Keane on up front.

Lingard almost grabbed his second, however, he got the ball tied up to his feet before he could get away a shot.

Once again the away fans were in fantastic voice making the majority of the noise inside the stadium of just over 9,000 spectators.

Will Keane’s first taste of action almost saw him score the fourth goal, but his left-footed strike hit the post. Unfortunately for the young forward it was his last taste of action as he had to leave the field with what looked like a groin strain. So, having used up all their substitutes, United had to see out the final fifteen minutes of the match with only ten men.

The home side did, at least, have an attempt on goal as late as the 84th minute, which United’s defence managed to clear. Suddenly Shrewsbury had a belief that they could score as Ogogo had a totally free header which he directed across the goal and wide. In all honesty, Romero should have picked the ball out of his net after the striker was left unmarked and in a great goal scoring position.

At the death, Memphis was still trying to get his name on the scoresheet but the keeper managed to block his close-range effort.

Cole came close for the Shrews with a shot that only just went over Romero’s bar. You wonder what would have happened if Shrewsbury had played the whole match with as much energy as they had shown in the final ten minutes.

Full-time 3-0 and, in the end, a job well done by United. If not scintillating football is was a vast improvement on recent results and sets up a mouth-watering home tie in the quarterfinals against West Ham United. But let us not forget that this was a victory against a Football League One side and there will be tougher teams ahead. For United it was a step in the right direction.

Next up is the small matter of the return tie against FC Midtjylland and another chance for van Gaal and his team to reignite the season and make amends for the first leg.