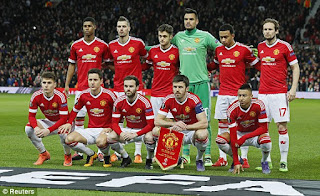 Manchester United has a new hero in the shape of 18-year-old local born Marcus Rashford whose debut double saw the Red Devils through to the last 16 of the UEFA Europa League.

After the shock defeat last week in the first leg there were many wrongs to put right including a home performance that could at least put a marker down for the remainder of the teams left in the Europa League that United were taking the competition seriously.

With the treatment room at Carrington full to the rafters it was a mixed bag of news for van Gaal in the run-up to the match. The return to training of Rojo and Valencia with the former on the bench for this match. But it was a game too soon for De Gea who will hopefully be fit for when United host Arsenal on Sunday in the critical Premier League game. 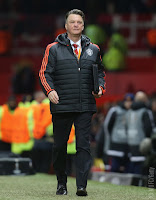 Then, during the warm up the injury jinx hit United again as striker Martial pulled up with what looked like a hamstring problem. This meant that youngster Marcus Rashford would unexpectedly make his starting debut on the biggest night of his career. Also making his full debut was Joe Riley at left back.

Carrick started at center back in place of Smalling in a role that he has filled in before, so it shouldn’t be a huge upheaval at the back.

The home side as expected enjoyed the majority of the play in the opening minutes with Rashford and Riley looking sharp on their first starts for the Reds.

The Danish visitors clearly came with a frustrating game plan as most clubs do when they come to Old Trafford and that was to sit everybody behind the ball when United attacked.

On the quarter hour mark Rashford showed the skill that all the fans who follow the reserves knew about as he broke at pace into the area and powered a shot towards goal which the keeper managed to turn round the post for a corner.

Memphis seemed to enjoy himself on the left and on one run beat a number of defenders to open up a chance but the end result came to nothing.

Then in the 27th minute and totally against the run of play with practically their first clear chance on goal Midtjylland scored. And it was a goal by Sisto, who waltzed through the United defence and placed a shot to the right of Romero.

United responded to the set back well with Memphis, attempting to bring his side level with a shot that almost found its way through. Just after the half hour mark the Dutch wingers persistence paid off when he weaved his way past a couple of defenders and delivered a low fizzing cross from the left which was turned into his own net by Bodurov. 1-1 and United looked up for the fight.

Schneiderlin tried the acrobatics with an overhead kick which was only just wide. Memphis was on fire as he was at the head of every United move and certainly looked on top of his game. His confidence was there for all to see as he tried to beat the keeper from thirty yards as the ball flew just wide.

Now the Red Devils needed two more goals to qualify and if they kept feeding Memphis then you got the feeling anything was possible. From the home side’s seventh corner the away side needed a great save from Anderson to keep their noses in front on aggregate.

As the clearance came back towards the visitors penalty area Memphis flicked the ball onto Herrera and as the midfielder entered the box he was tripped to earn United a penalty.

Mata took the huge responsibility and placed the ball towards the bottom corner. But Anderson dived well to turn the ball out for a corner. It was a great save by the keeper who read Mata’s intention well. This means that the Spaniard will be taken off spot kick duties for sure.

Half-time and all square at 1-1 in a half that United totally controlled and was unlucky not to be ahead after all the possession they enjoyed. In the end, they shot themselves in the foot with a lack of quality in defending by Blind and Carrick for the visitor’s opener by showing a lack of commitment to make a challenge on Sisto as he danced across the area.

On a positive note it was all about Memphis as he tortured the Midtjylland defenders and was at the heart everything United produced, including an assist for the own goal and the pass for the penalty.

The second half got underway with the pressure on United to turn the tie around and they would have loved the chance of an early goal which almost came when Mata floated a delightful ball over to the far post where Schneiderlin was waiting unmarked. The Frenchman inexplicably hit his shot back across the goal when it looked certain he would blast the ball into the back of the net.

Herrera had the next chance as he ran onto a far post cross from Memphis, but the midfielder seemed to change his mind about shooting and elected to head the ball which went just wide.

It was all United as they went in search of their second goal at the same time having to keep an eye on the counter from the visitors especially with their half-time substitute and scorer from the first match 2.01m Onuachu.

Just before the hour mark, the atmosphere in the ground went a bit flat as United took their foot off the pedal and the visitors enjoyed more of the ball. 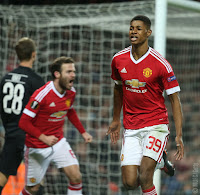 The game, the tie and the atmosphere were suddenly brought back into life in the 63rd minute as Marcus Rashford scored a wonderful goal on his debut in front of the Stretford End after great work by Mata, who won a lost cause as he saved the ball from going out of playing and pulled it back into the area and their was Rashford first to react and placed the ball gleefully into the back of the net. A great moment for the 18 year old and hopefully the first of many at the Theatre of Dreams.

Lingard seemed to have won a penalty for his side and as the crowd cheered the referee decided wrongly, that the forward had dived and booked him for simulation. A decision that could have had a huge bearing on the outcome of this match as United were still in search of the goal that would see them through. Also, it means that Lingard will be suspended for the next match in the competition.

Memphis continued to conjure up chances from the left and you got the feeling that if any player was going to create something it was him.

As the game entered the final fifteen minutes it was the debut boy who turned hero again as Rashford side-footed in from a chipped cross from Varela. What a debut from the Manchester born striker it will be a night he will never forget.

Following the goal, it was a welcome return to play for fans favourite Marcos Rojo who came on for Joe Riley, who certainly played his part in his first start for United. Lingard was also withdrawn by van Gaal and replaced by Pereira.

Two minutes left on the clock and United was awarded a second penalty for a handball by Hansen. The crowd was calling for Rashford to take it and get his debut hat-trick, but Herrera took the responsibility and dispatched his shot firmly into the back of the net.

Midtjylland would see out the last few minutes of the match with ten men when Romer received his marching orders after a torrid night up against Memphis.

Then at last after all of his hard work Memphis got his just reward by netting United’s fifth goal of the night with a cut in from the left and a shot that gave the keeper no chance. A deserved goal for the man of the match. 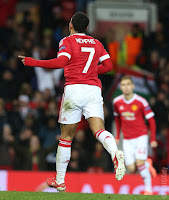 There was still time for another player to make his debut for United as Regan Poole entered the match in place of Herrera in added time.

Final score 5-1 and 6-3 on aggregate saw United successfully through to the next round after a second-half display that was more like United of old as the Stretford End hailed a new hero in the shape of youngster Rashford who scored a double.

Not bad for a player who thought he would be stuck on the bench proving that dreams do come true and he took the opportunity that was presented to him with the confidence of a quality forward.

After all his troubles this season it was pleasing to finally see Memphis perform to the level that everyone knows he can play at. The extra training sessions with Giggs are clearly paying off.

Next up is Arsenal at home in the Premier League for United. They will not have it as easy as they had it in this match and with Martial added to the injury list the team selection could be a headache for van Gaal. However, in Rashford he has the option of a young man who has the ability and confidence to grab the goals.