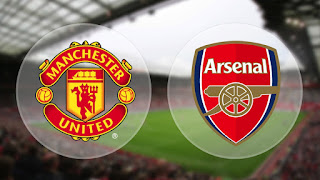 Louis van Gaal literally fell over backwards to make his point during a match that Marcus Rashford proved his worth with yet another double to follow his brace on Thursday. That’s four goals in two games for the young man which made sure his team ended the week on a high.

The last seven days have seen United progress in two cup competitions and reignite their attempt to gain an automatic Champions League place in the Premier League.

Lately, it had looked increasingly difficult for United to grab a coveted top four position. However, they have a new found belief and nothing is better than beating the Gooners and their manager Arsene Wenger along with damaging their hopes of winning the league.

In the past, it was usually a title decider between these two giants of the league but how those days have changed. The fact that Leicester City is the top team says a lot about how the pendulum is swinging as the normal top four clubs are slowly losing their stranglehold on the league.

Would van Gaal keep faith in the youngsters that have performed at the top of their game for him and the club? Especially local lad Marcus Rashford whose debut double against Midtjylland catapulted him onto the football world stage.

The answer was yes, as was reflected in the squad: De Gea, Varela, Carrick, Blind, Rojo, Schneiderlin, Herrera, Mata, Lingard, Memphis and Rashford started the match and the bench was brimming with young talent.

De Gea and Rojo returned to the starting lineup in place of Romero and Riley. Rashford was handed his first Premier League start and on the bench, there was another academy youngster getting his first taste of first team football the versatile 18-year-old Dutch player Timothy Fosu-Mensah who can play in midfield or defence sat alongside James Weir, McNair, Pereira and Januzaj.

Arsenal got the game underway with United old boy Welbeck in the side and the last time he played at Old Trafford it was his winner that knocked United out of last years FA Cup.

The first chance fell to the visitors as Monreal beat the off side to face De Gea who was alert enough to block the shot. Let off for United who didn’t seem comfortable with Carrick at the back in the opening exchanges.

Varela was cautioned early doors as he struggled to contain the lively Sanchez and wrestled the Chilean to the ground more in keeping with the Six Nations rugby.

Rashford showed his natural power and agility by weaving his way past two defenders and was tripped right on the edge of the penalty area. Memphis struck the resulting free-kick well enough to make Cech save on his line. Brilliant play by Rashford in the build up proving he has the confidence and temperament for the big occasion.

Carrick picked up United’s second yellow of the match for a late challenge on Welbeck, which was taken by Ozil and had the crowd gasping as De Gea flapped the ball away from danger after a Sanchez flicked header, thankfully  the linesman had raised his flag for offside.

Then just before the half hour, the Theatre of Dreams exploded into life as Marcus Rashford took over the match for the next couple of minutes as he announced his presence in the Premier League with a brace that sent the home fans and the manager into pure ecstasy.

The first came courtesy of a missed clearance by Arsenal following an early cross whipped in from the right by Varela and there was Rashford to calmly place the ball into the net to grab his debut goal.

The second followed good work from Lingard, who crossed the ball again from the right, which Rashford met with a firm header to plant the ball past Cech. A fairytale start for the youngster to make it four goals in two debut games.

Welbeck continued to haunt United by pulling a goal back for Arsenal just before the break with a sneaky header past De Gea.

Half time and United led 2-1 in a half that was illuminated by Rashford’s finishing to make him the youngest player to score two goals for United in a Premier League match.

The only blight on the half was how easy it was for Welbeck to get between defenders to keep his side in the game. Carrick was having an off day at the centre of defence alongside Blind and Varela was being run ragged by Sanchez.

The home side got the second half underway attacking their favoured Stretford End. There was a worry for the home side straight away as goal hero Rashford was caught with a boot to his nether region and needed some treatment. When he saw Januzaj warming up, he soon returned to the pitch.

United struggled a little to get into the game in the opening minutes of the half as the visitors tried to take the game to them. It nearly paid off as a mix up between Blind and Carrick opened up a gap through the middle of the defence and if it wasn’t for the covering pace of Rojo it could have ended in the equaliser.

After ten minutes Rojo picked up a knock in a challenge with Welbeck and had to be replaced by yet another player making his debut Fosu-Mensah.

Lingard earned United a free kick on the right and the ball was floated over to the far post where Schneiderlin had so much time to ready himself for a shot but he over elaborated and his effort was blocked.

The Red Devils eventually came alive again with some attacking play that deserved more than the end results produced with Memphis, Mata and Rashford involved in the majority of the attacks. 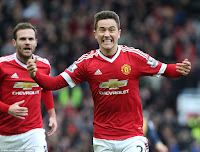 On 65 minutes Rashford turned provider as he played a delightful pass into the path of Herrera, who made no mistake in blasting his team into the lead, via a slight deflection, which sent the home fans into raptures of delight. The goal followed a break out of defence by Mata who fed the ball to Rashford and the vision the young man showed to play in Herrera was proof that here is a player with immense skill.

Arsenal kept plugging away and pulled another goal back after De Gea saved brilliantly from point blank range from Welbeck but Ozil was there to knock in the rebound.

There was a scuffle in the midfield after Herrera and Ramsey clashed and both reacted angrily towards each other. They were both cautioned for the spat.

The players were really getting stuck into the challenges and referee Pawson had a hard time keeping control of them. Van Gaal was unhappy and made his way to the touchline and demonstrated how he thought the Arsenal players were diving by literally falling to the ground backwards for the benefit of the fourth official. Comical, but great to see him off the bench remonstrating much to the delight of the crowd.

Local hero Rashford was denied the chance of a hat-trick as he was replaced by Januzaj for the last ten minutes of the match. The standing ovation the goalscorer received was probably the loudest heard inside the famous stadium for many a season.

Arsenal still tried to get the game back on level terms but each time they played the ball into the area De Gea was there to tidy up. It was all frantic stuff as United frustrated the away side with keep-ball by the corner flag with Mata and Memphis combining well together.

Five minutes of injury time were added to the tension as the two old rivals fought for every ball and neither team wanted to give an inch. Pulsating stuff from both sides.

James Weir became the latest starlet to make his debut when he entered the fray for the last few minutes in place of goalscorer Herrera.

United held on to claim all the three points and dent Arsenal’s title challenge and at the same time make up ground on Man City mostly thanks to man of the match Marcus Rashford, who once again proved that the young guns at United are worthy of a place in the first team.

You wonder how the season could have been if the team had played with this amount of enthusiasm from the start. The experienced players have to hold their hands up and admit that the youngsters are showing them how it’s done in no uncertain terms.

The games are now coming thick and fast as the season enters its final bend so the return of injured players is going to be critical in how United’s campaign ends. So as not to end the season empty handed again, United will need the mixture of experience and the energy of the younger players to carry them through to the finish line.