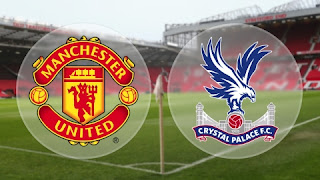 A stunning strike by Matteo Darmian, his first goal for the Reds, guaranteed a win and three more points for Man United in their chase for a top-four finish.

Time is running out for United as they chase an all important place in that top four and their fate lies with the teams above them. All they can do is win their own matches and hope that results go their way.

A midweek match isn’t the ideal preparation for the FA Cup semi-final this weekend, but it gave van Gaal an opportunity to make some changes and at the same time have a look at the potential final opponents should United and Palace meet at Wembley in the season-ending showpiece in May.

With one eye on the semi-final van Gaal made three changes to the starting eleven. Rojo, Fellaini, and Depay made way for Darmian, Lingard, and Martial. The team: De Gea, Darmian, Smalling, Blind, Valencia, Schneiderlin, Mata, Lingard, Rooney, Martial and Rashford.

United got the match underway with many seats empty inside the Theatre of Dreams desperately in need of a win to keep alive any hopes of a Champions League place.

There was something for the home crowd to celebrate as early as the fourth minute when an own goal by Palace put the home side ahead. It was Delaney who unwittingly put a low cross from Darmian into his own net when there was no United player anywhere close to the ball.

Following the goal, both teams had chances, including a close effort by Mata followed by Adebayor who pulled his shot wide.

Antonio Valencia enjoyed a lot of the ball down the right wing and was involved in many of United’s attacks in the opening twenty minutes that saw Mata and Lingard linking well with Rashford to almost create a couple of openings.

There was nearly a second goal provided by Martial, whose shot from distance was saved by the keeper Speroni at full stretch. Next up it was Rooney trying his luck after a neat lay off from Martial. The captains’ drive was collected by the busy Palace keeper. This was Speroni’s first match since last May in which he also faced United.

After half an hour the Red Devils were well on top in the game and looked the more likely side to add to their lead with Martial and Valencia providing the threats down the left and right respectively.

That man Delaney almost doubled his own goal tally for the night when he deflected a dangerous cross from Martial just wide of his post.

Teenage goal machine Rashford was played through on goal by his captain Rooney, but the usually prolific striker hit his shot weakly at the keeper. There were then two chances in quick succession the first from Lingard and the second by Martial both of which were well saved by Speroni in the Palace goal.

Just before the break there was a bad two-footed challenge by Souare on Juan Mata that quite rightly received a yellow card and he was lucky it wasn’t worse for him and Mata.

Half time and United would have to be happy with the slender 1-0 lead they had. The fact that it was only one goal was down to the man between the sticks for the away side after Speroni made save after save to deny United on numerous occasions.

As the second half began all United had to do was continue in the same vein as they had in the first half and their patience would surely be rewarded. Unless, of course the keeper had other plans. No changes were made by van Gaal as Palace restarted the match.

An early chance fell to Rooney after more great work from Martial who managed to cut the ball back from deep, but Rooney’s low shot was just deflected wide by a defender.

The next opportunity fell to Mata who benefited from Rashford’s tenacious hard work to fire a shot towards goal that Speroni turned around his post for a corner.

From the Blind corner, United doubled their lead in the 55th minute with a screamer from Darmian on the edge of the box that the keeper this time had no chance in stopping in a month of Sundays. Not a bad way to open his goal account by chesting the ball down then volleying it in off the post in front of the Stretford End.

The third goal almost came when Rashford unselfishly laid the ball off to Lingard inside the penalty area only to see the keeper make a double save from himself and Lingard.

That was Rashford’s last moment of action as he was replaced by Memphis. The standing ovation from the home crowd as he left the pitch showed how much his all-round effort was appreciated. 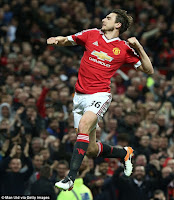 Speroni was at it again when he tipped a Rooney header over his bar. Herrera made an appearance in place of Lingard for the final twenty minutes of a match that United had a firm control of.

The third and final change made by van Gaal was to give Rooney a breather and replaced him with Fellaini.

There was a scare for Smalling as he went into a challenge and he seemed to struggle for a few minutes as he tried to run off the knock. Thankfully, he managed to recover as the match progressed.

The home side went through the motions as the match entered the final ten minutes with the game won it was a case of not risking an injury before the weekend. Dutch winger Memphis tried to get his confidence back on track with a curling effort which was deflected away from goal.

Fresh from his first goal for the club Darmian clearly had a taste for more as he tried his luck again, but this time, it wasn’t as spectacular and probably best forgotten.

The match ended with another win and three points in the bag for the home side. The match was a relative stroll for United as Palace offered no threat in attack and it turned out to be a good work out for the Reds ahead of the all-important match at the weekend. This display was an improvement on the win over Villa but far from the polished performance that the fans are looking for and more importantly expect from United.

Rashford impressed once again with Mata pulling the strings alongside Rooney. Schneiderlin proved his value to the side with his unassuming but effective style of play. The defence had a relatively easy night of it which allowed them to play higher up the pitch and provide the extra ammunition in attack.

However, it was Anthony Martial who again stood out as he was involved in the majority of United’s attacks and if not for the outstanding form of the away keeper he would have added to his season’s goal tally.

All the attention now turns to the semi-final at Wembley and the showdown with Everton in the FA Cup, which is the last chance for van Gaal and his team to get their hands on a trophy.

Lastly, talking about trophies, congratulations to Warren Joyce and his U21s who managed to retain their League title by beating Spurs. A superb achievement by the youngsters, most of whom have managed to break into the first team during this season which shows the fantastic array of young talent currently at the club.