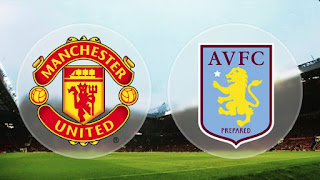 Marcus Rashford came up with the goods again in a match that didn’t exactly get the pulses racing but moved United to within touching distance of a top four place at the same time guaranteeing relegation for a poor Aston Villa side.

After earning themselves a place in the FA Cup semi-final, United turned their attention back to the bread and butter of the Premier League and with an outside chance of a top-four finish it was imperative that they dispatched Villa and gained a valuable three points.

Valencia, Schneiderlin, Rooney and Memphis all returned to the starting lineup as players were rested bearing in mind the midweek game against Palace followed by the trip to Wembley to tackle Everton in the semi-final of the FA Cup.

Smalling had a landmark to celebrate as he made his 200th appearance for the Red Devils.

Villa started the match hoping to get the win that would delay the inevitable for at least one more week. However, it was the home side that enjoyed the early possession and it would be interesting to see how the Rashford and Rooney axis connects. The early signs were positive as Rashford almost picked out his captain with a through ball but Rooney was flagged offside.

The first effort on goal fell to Rojo who headed a cross from a free-kick just over the bar. It was clear early on that the visitors sat too deep in their own half and allowed United to force themselves on them and if that tactic continued then it would be doubtful if it ended 0-0 at half-time for the umpteenth time this season.

A smart passing move between Rashford and Mata as they turned defence into attack ended up with a corner which was almost flicked in by Rojo.

Villa defender Lescott almost converted a Rashford cross from the right wing into his own net which actually was the closest effort on goal for United in the opening twenty-five minutes of play.

The game during the first half hour was like the Manchester weather during the match bright in parts but mainly dull and damp.

Former Red Kieran Richardson tried his luck from distance but his lame effort sailed high over De Gea’s bar. Then in the 32nd minute the deadlock and drabness to the match was broken as Rooney played a delightful crossfield ball to the right channel where Valencia picked it up and delivered a low cross into the penalty area and there to meet it was the man of the moment Rashford to sweep home the opener and register his seventh goal in twelve games to continue his dream debut season.

Just before half time Mata was again involved in a build up with some neat interchange passing with Rooney which came to nothing in the end.

The first half ended and United led 1-0 thanks to the youngster who just can’t stop putting the ball in the net. It has to be said that Rashford’s goal was the only highlight in a pretty uninspiring 45 minutes in which United struggled yet again to create any chance of worth.

It was an unchanged United side that got the second half underway in the sun at Old Trafford hoping to build on the one goal lead they enjoyed. 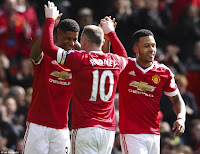 It was scorer Rashford who almost doubled his tally when he sprang onto a through ball from Mata only to see his effort squirm inches past the post. The youngster also showed his sporting side when he stayed on his feet inside the area following a nudge from Hutton when most players would have gone to ground as if they had been shot. Great to see from the young lad.

Memphis Depay has not had much to shout about this season as his confidence has suffered, but it was nice to see him at least try to be more positive in his approach play and in one such foray he played a teasing ball towards Rooney but the captain’s first touch was too heavy.

Memphis, then beat two defenders on the left and played in a low cross which eluded everyone. He followed that up with a curling effort from the edge of the area that was well off target.

Mata almost squeezed the ball in at the near post following a corner, but that was the only chance in the first ten minutes of the second half that threatened to become as stale as Villa’s season.

Van Gaal decided that Rooney had had enough of a workout and replaced him with Lingard for the last twenty-five minutes.

Prior to the change Memphis was unceremoniously brought down and got up to take the free-kick himself which fizzed inches over the bar. Then the Dutch winger tracked back into his own area to shoulder barge Ayew off the ball and straight into the advertising hoardings with the force of a man with a point to prove.

A second substitution was made by van Gaal as the match entered its last ten minutes and that was a straight swap up front when Martial replaced local hero Rashford.

Once again Mata almost found a route to goal via the near post when he flicked on another corner that had clearly been practiced on the training ground.

Villa had decided not to go down without a fight as an almighty goalmouth scramble in the last five minutes almost saw them get the ball over the line until Blind cleared, they then followed that up with a strike from Gestede that struck the post. From the next corner, Clark headed goal ward only to see the brilliant De Gea save on his line. Not for the first time this season did the Spaniard come to his teammates rescue.

As the match neared its end Mata was brought off and the talented Fosu-Mensah was given another run out.

Memphis almost rounded off a good display with a goal after Martial had played him through but he just couldn’t find the chip needed to get the ball over Guzan who diverted the ball onto the post. 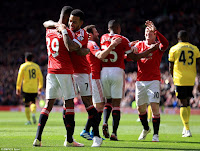 At the final whistle, United celebrated a valuable three points from an uninspiring match that made sure Villa would spend next season in The Championship after 28 years in the top flight. The win moved United up to within only one point of neighbours Man City for a while at least.

Although there wasn’t a standout performance from any player in Red there were a few choices for the man of the match, including Rooney, who had a decent return to the starting lineup, Schneiderlin went about his business in his usual no-nonsense style, Mata didn’t stop running all day and Memphis at least tried to conjure up something. However, Rashford deserves the plaudits yet again after his goal secured the win.

Next up is the visit of Crystal Palace in the Premier League in midweek then it’s off to Wembley for United’s first semi-final in the FA Cup since 2011. Everton stand in the way of United reaching the final and lifting their only silverware this season.