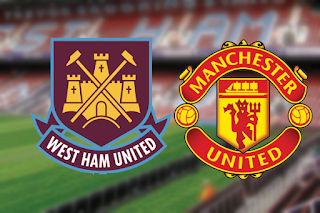 Man United came out on top in a typical cup tie in which two evenly matched teams battled it out in a replay for a place at Wembley.

The tie took place on a wet evening under the floodlights within a packed house in the last FA Cup tie to be played at Upton Park add to that the goalmouth drama towards the end and it all ensured that nerves were on edge right until the final whistle.

In a season already short on expectations for a club of Manchester United’s stature here was a make-or-break cup tie that would determine if once again they would end another season empty handed.

The impressive young defender Fosu-Mensah recovered from his knock last time out to take his place at right back. There were recalls for Herrera and the much maligned Fellaini. Carrick somehow kept his place after some poor displays of late and Rooney was deemed fit enough to join Mata, Young, Schneiderlin, Valencia and Memphis on a pretty strong looking bench.

The home side got the match underway amid a chorus of cheers from both sets of fans inside the compact stadium.

Lingard showed great early awareness as he played a delightfully weighted pass to Rojo on the left wing who in turn sent over an early cross into the box that was cleared by the home defence.

West Ham put De Gea and his defenders under pressure early doors as they threatened to open the scoring with a flurry of free kicks in dangerous areas all taken by Payet who looked the likeliest of players to score from set pieces.

Fosu-Mensah seemed to have his hands full at right back with both Payet and Lanzini testing the youngsters nerves.

United worked their first shot towards goal following a run by Fellaini. The Belgian chose to pass to Rashford whose effort was blocked for a corner. Martial was left fuming at Fellaini’s choice of pass as he was totally unmarked on the left edge of the area.

There was a great chance for Fellaini to put United ahead as he struck from close range, but his goal-bound effort was somehow saved by Hammers keeper Randolph.

Twenty minutes played and after the home side had started well United enjoyed their best period and could have burst West Hams’ bubble on a couple of occasions if it wasn’t for their usual poor finishing and dire deliveries from corners.

The recalled Herrera enjoyed a bit of freedom in the midfield and showed his quality of vision as he picked out the runs of his forwards time and time again.

United’s captain on the night Carrick was booked for a blatant block on the advancing Valencia deep in his own half. From the resulting Payet free kick Lanzini blasted over De Gea’s bar. United had to be more careful not to give too many cheap fouls away.

The visitors worked an opportunity for Lingard after a brilliant surging run by Rashford and as Lingard only had the keeper to beat, he placed his shot well, but Randolph stuck out his boot to make the save.

That was the second clear chance to fall for United and you got the feeling that with the space West Ham was giving them the Red Devils should have put one of those chances away.

Next up was Carrick to see his shot squirm just wide of the post. It would have been fitting if he could have scored a goal at his former club in the last cup tie at the ground.

Just before the break Rojo wad cautioned for a careless foul which was followed by a yellow for Carroll.

Half-time and to be honest United had the better of the play and created the most chances and if not for the Hammers’ keeper would have gone in ahead at the break.

They managed to pass the ball around well and had a good balance about them as they played the game at their own tempo which took the sting out of the home side’s game at the same time quietening down the home fans.

The worrying factor had to be yet another first half in which United had failed to find the back of the net and you worried that the missed chances would come back to haunt them in the second half.

United got the second half underway and van Gaal decided not to replace Rashford with Ashley Young as he had surprisingly against Spurs.

An early swerving effort from Lingard in the opening minutes showed United’s intent as they piled the pressure on West Hams penalty area. At the other end, De Gea had to be alert to save low at his near post from a long range effort from Kouyate.

Then in the 52nd minute it was the turn of the man of the moment Marcus Rashford to turn the tie in United’s favour in spectacular fashion as he opened the scoring with a piece of individual skill to bend in a screamer into the top far corner of the goal to put United 1-0 up after being played in by Martial.

A lead that they fully deserved and what a strike from Rashford as his confidence knows no bounds at the moment.

The home fans tried to raise the atmosphere and they all jumped to their feet when they believed a penalty should have been awarded against Carrick and Blind but thankfully referee Roger East waved away the claims.

United’s lead was doubled in the 66th minute by Fellaini who bundled the ball home with his knee after some poor home defending to put the visitors firmly in control of the tie. The goal led to the 5,000 away fans blaring out the fact that United was going to Wembley.

Following the goal, a jubilant van Gaal decided to replace Rojo with Valencia which meant that Fosu-Mensah switched full-back roles for the last twenty minutes.

Herrera became the third United player to be booked after a high boot against Payet. Shortly afterward he was injured in a challenge and had to be replaced by Schneiderlin. West Hams’ captain Noble decided that Herrera wasn’t leaving the pitch quick enough so took it on himself to carry the Spaniard off much to the joy of the home fans.

Another Spaniard was called into action as De Gea saved with his feet at his near post. But in the next attack West Ham pulled a goal back after Tomkins headed in bravely from close range. Game on.

The goal set up a very nervy last ten minutes as United tried to relieve the pressure by keeping the ball, which frustrated the home players and fans, but the youngsters in white showed their willingness to get through to the semi-finals.

Then in true FA cup drama as full time approached the best keeper in the world made a brilliant double save as De Gea kept the ball out in outstanding fashion and in doing so kept his side in the cup. The Hammers did manage to get the ball in the net at the third attempt but it was ruled offside.

Wayne Rooney made a return to first team action when he replaced scorer Rashford in injury time. What followed was a frantic end to a match that was true to the romance of the cup as United persevered and made it through to a semi-final against Everton.

There were some outstanding players on display tonight, including the revelation at the back Fosu-Mensah along with Fellaini, Herrera and Carrick holding firm in the middle.

De Gea had yet another superb night in goal and was so close to the man of the match. However, that honour has to go to goal machine Marcus Rashford who once again showed his cool head and quick feet to provide the platform for the victory.

Louis van Gaal is between a rock and a hard place as even if he manages to bring the FA Cup to Old Trafford the campaign will still be considered a failure especially as if expected there will be no Champions League football next season.

In the meantime, the team should be applauded for the way they overcame West Ham and set up a tasty match at Wembley against Everton.