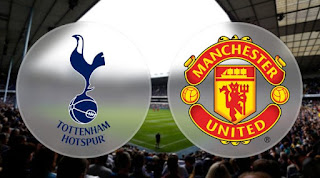 Spurs took advantage of some terrible United defending during a six-minute spell in the second half to keep alive their dreams of winning the league at the same time seriously denting the hopes of a top four finish for United.

Not even a thirty-minute delay to the game could dampen the appetite for a match that had both sides needing the three points in order to keep the pressure on the sides above them. Spurs to keep on Leicester City’s tails until mathematically impossible and United to have any chance of a top four finish. Who would deny the others aspirations?

Van Gaal decided to make only one change to the side that had won the last two Premier League matches and that was to replace Darmian with the impressive Fosu-Mensah at right-back. His starting eleven consisted of: De Gea, Fosu-Mensah, Smalling, Blind, Rojo, Carrick, Schneiderlin, Mata, Lingard, Martial and Rashford.

Carrick was given the chance to redeem himself against his former club after a poor performance against Everton last time out and not for the first time this season Memphis and Herrera were left to keep each other company on the bench.

An incredible atmosphere welcomed the teams inside the stadium as both sets of fans tried to get behind their players from the off.

United started the brighter of the two sides and looked lively in attack, especially when Martial was on the ball proving what a handful he is to all defenders. He almost latched onto a ball at the far post, but got his angles all wrong.

Then it was the turn of Fosu-Mensah to try his luck from the edge of the area but his effort was deflected for a corner. One thing the Dutch youngster is not short of and that is confidence.

Confidence is something that Carrick is in short supply of these days as he misplaced a number of passes in the opening twenty minutes which halted United’s forward momentum.

De Gea showed his tremendous reflexes with a wonderful point-blank save to deny Harry Kane. But the Spurs and Premier League leading goal scorer was adjudged to have been offside anyway.

There was a mad two minutes for United just before the half-hour mark where they struggled to clear their box, but a combination of Fosu-Mensah and De Gea together with a dreadful headed miss by Lamela ensured that the game stayed goalless.

The pendulum had swung in Tottenham’s favour as the half progressed, however, full credit to the Red Devils for standing their ground and defending as a unit.

Half-time and it was a case of the same old story for United as they enjoyed a lot of the possession but created almost nothing of note. The miss of the half had to be Lamela’s shocking miss from close range that looked a certain goal.

The one positive that the visitors could take from a fairly poor half was the all round performance of Fosu-Mensah, who followed on from last week’s impressive run out with an assured display.

At the start of the second half van Gaal decided to introduce Ashley Young into the attack in place of Rashford. Young slotted straight in at centre forward with Martial and Mata out wide and Lingard in the number 10 position. Young had played for the U21s in that position recently and maybe van Gaal saw something no one else had.

De Gea was called immediately into action with two fine stops from long distance shots. Sometimes he makes the difficult seem so easy, which is a testament to his immense ability.

Once again Smalling was excellent for the visitors as not for the first time he thwarted a Spurs attack by clearing the ball from a position of danger.

As the hour mark approached it was all rather dull and United’s only effort was a wayward shot from Lingard. Rojo summed up the visitors afternoon when he found himself in acres of space to deliver a cross from the left but he rushed it and the chance was gone.

Anthony Martial decided enough was enough and took matters into his own hands when he weaved his way through the entire home defence and let loose with a shot that keeper Lloris did well to stop on his line.

As the match entered its final twenty minutes Fosu-Mensah had to leave the play with a knock he received in a challenge with Alli while clearing his lines and was replaced by Darmian. This change proved pivotal in the outcome of the game.

As soon as the youngster had left the field a gap appeared in the visitors defence that Spurs took full advantage of through an unmarked Alli, who was left free to slot home the opening goal of the game. Shocking defending by United and you got the feeling that Spurs would fully capitalise on that change of the United players.

And capitalise they did at first from a set piece Alderweireld headed in the second, followed by Lamela who made up for his earlier miss with a side-footed third to put the result beyond doubt.

How United capitulated is beyond belief, but it is no coincidence that the goals came after Fosu-Mensah had been replaced after being injured in a challenge. The youngster had played an important tactical role on his full debut. Memphis was brought on in place of Mata for the last ten minutes.

It could have been four if not for a great tip over by De Gea from a Kane header. The Spaniard then repeated his heroics with a save from Alderweireld to keep the score down.

All hell broke loose as Memphis and Walker squared up to each other on the touchline that looked in danger of going too far until other players intervened and both players were booked for the fracas.

Full-time and an extremely disappointing day for United and a result that seriously damages the hopes of a top-four finish and with it the absence of Champions League football next season. A lack of concentration and poor defending in the space of six minutes cost the visitors greatly and must surely raise the question of van Gaal’s game plan in the second half.

Once the impressive Fosu-Mensah had left the play Eriksen enjoyed more freedom and it was that freedom that allowed him to play in the space on the left to provide the springboard for the Tottenham victory.

If you look closely at United’s set up during the match, you have to scratch your head in disbelief at some of van Gaal’s tactics. Mata on the wing and two center-backs as full-backs has not been uncommon this season, but to use Young, a winger, as the main striker and Martial, a striker, as a winger beggars belief.

There were players who at least tried to keep United in the game they included De Gea, Martial, Smalling and Fosu-Mensah but unfortunately the others did nothing that came close to being acceptable for United.

Next up for United is another visit to the capital to face West Ham United in their FA Cup quarter-final replay and the last chance of winning any silverware in yet another disappointing season. However, don’t get your hopes up too high based on this display.