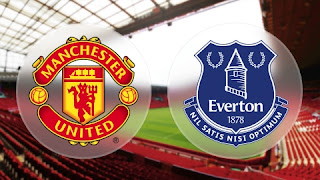 Anthony Martial ensured that United kept up the dream of a Champions League place with the 1,000th strike at Old Trafford in the Premier League.

It was a welcome return to Premier League action for United following the latest round of internationals with the visit of Everton to Old Trafford.

As is usual the international matches brought more injury woes for United with the news that Bastian Schweinsteiger could be out for the rest of the season with a knee injury while on duty with Germany. However, there was more positive news on Herrera and Young, who used the break to get in some important fitness work.

Van Gaal enjoyed possibly his best away performance of the season at Goodison Park in the 3-0 win back in October. But since then the Toffees have vastly improved as a team and have only lost one away game all season so United would have to be on their toes against their possible FA Cup semi-final opponents.

United’s starting XI was unchanged from the side that defeated Man City away: De Gea, Darmian, Smalling, Blind, Rojo, Carrick, Schneiderlin, Mata, Lingard, Rashford and Martial. Ashley Young and Ander Herrera were named on the bench alongside Memphis Depay whose disappointing debut season continued on the sidelines.

After the unveiling of the renamed South Stand in honour of Sir Bobby Charlton, the match got underway with United attacking the Stretford End looking for the vital three points that would put pressure on Man City.

It was a lively start to the half by both sides as they went in search of an early opener with Martial coming the closest with a rasping drive that narrowly flew past the far post after a slight deflection. A shot that Charlton himself would have been proud of.

The visitors had clearly come to Old Trafford with aspirations of getting a result and looked well organised throughout the side, but a little suspect when Rashford stretched his legs down the right as his pace was too much for Baines.

After half an hour the match was an open affair with the play reverting from end to end. Martial and Rashford were causing all sorts of problems with their pace for the away defence. Blind and Smalling stood firm at the back with the strong threat from the Belgian striker Lukaku. 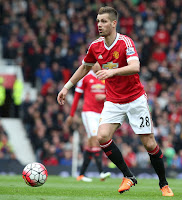 As the half neared its end Schneiderlin proved once again how valuable he is to the side with another commanding display in midfield as he fed the forward players with the ammunition to attack.

With Darmian providing the width on the right United had a good balanced look about them. The only downside was that Carrick was having a torrid time up against Barkley with the youngster showing up his elder for pace and challenges on more than one occasion.

Half-time and all square at 0-0 for the tenth time at Old Trafford this season with both sets of defenders standing their ground and coming out on top against their attackers with United edging the best of the very few chances and it has to be said slightly on top but with nothing to show for their efforts. An entertaining but at times a cagey affair.

The second half started with a change for the home side as van Gaal replaced Rojo with Fosu-Mensah which meant that Darmian had to switch flanks.

Lukaku had the first chance of the half, but as he turned to shoot from close range Blind was behind him to make a vital challenge before the striker could do some serious damage.

Then in the 53rd minute, United took the lead through their French sensation Anthony Martial to raise the roof off Old Trafford. The move began with Mata on the right wing who played the ball into the feet of Rashford who turned on the style with a backheel into the path of the onrushing Fosu-Mensah.

The substitute collected the pass in the area and played the ball across the goal mouth where Martial was waiting to pounce with a left-footed finish, albeit with the aid of the keeper, to give his side the lead. That strike was United’s 1,000th Premier League goal at Old Trafford.

It was a lead that was almost cancelled out by Everton a few minutes later when Jagielka sent a bullet header crashing off De Gea’s crossbar.

Carrick’s miserable day came to an end when he was replaced by the returning Herrera for the final thirty minutes. Carrick had endured a frustrating afternoon and looked decidedly off the pace.

Since the goal, United looked livelier as Everton were knocked out of their stride and struggled to get a hold of the ball as the Reds went in search of the important second goal to kill the match off.

The link up play between the home sides’ forwards was at times exciting to watch, especially between Mata and Martial who between them almost conjured up a chance as the game entered its final fifteen minutes.

Daley Blind was replaced by Valencia after he received a knock while clearing his lines. Blind performed well at the back and was outstanding against the power of Lukaku. The change meant that Fosu-Mensah switched to centre-back to partner Smalling.

De Gea produced a moment of deja vu after his heroics last season in the same match with a save on the line from a goal bound effort from that man Jagielka again. During this period, Everton enjoyed their best spell of the game and United had to be alert to the danger.

Alert they were as they saw out the match and collected all the three points to move up into one point of neighbours Man City in the fight for a Champions League place.

A special mention has to go to Daley Blind who was brilliant at the back alongside the ever reliable Smalling. Martial proved his scoring ability and his partners in attack never stopped running all day. Fosu-Mensah showed he has the talent to succeed with an assured performance after coming on with an assist for the goal and an all important block when Everton threatened towards the end.

It was vital that United won this match as next week they will be away to Spurs who themselves are chasing the title. So, a victory along with a clean sheet stands the Red Devils in good stead for the trip to London.

After an incredible 60 year association with Manchester United, Sir Bobby Charlton was honoured before the game with the renaming of the South Stand after the legend. A fitting tribute to a man who is after all Mr. Manchester United.

How about renaming the last available stand, the old Scoreboard End, after the man who literally rebuilt the club after the devastation of the second world war and went on to make the club into the giant it is regarded as now, Sir Matt Busby.

To end on another high it was great news to hear that Luke Shaw will start training with a Physio on the training ground this coming Monday. After the horrific double leg break, he suffered back in September let’s hope that next season he will come back stronger and full of confidence.