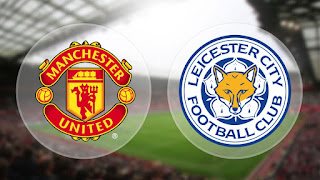 Leicester City will have to put the champagne on ice.

Man United’s hopes of clinching a Champions League place took a serious blow as they were held by league leaders Leicester City at Old Trafford.

Following the euphoria of reaching the FA Cup final with a goal at the death last weekend it was back to the league for the Red Devils with the visit of champions-elect Leicester City.

Exactly what Claudio Ranieri and his team have achieved this season is truly remarkable and at the same time inspiring proving that the Premier League is the most open league in the world. Consider this, at the start of this season, Leicester were a whopping 5000-1 to end the campaign as champions.

As regards United, there are only a handful of games left and still the possibility of a top four finish remains, so it was imperative that they  didn’t let the Foxes complete their fairy tale season by being crowned champions at Old Trafford.

After the excitement of last week, Louis van Gaal allowed his players some time off this week to recharge their batteries ahead of the last five games of the season. His starting XI was as follows: De Gea, Valencia, Blind, Smalling, Rojo, Carrick, Fellaini, Rooney, Lingard, Martial and Rashford.

Van Gaal decided to make only one change from the side that started the FA Cup semi-final and that was to drop Fosu-Mensah to the bench and start Valencia at right-back. Hopefully, the manager isn’t punishing the youngster after he gave away a debatable penalty last week.

United got the match underway attacking the Stretford End.

The first few minutes of the game were played in and around the visitors’ penalty area without United creating any clear openings on goal. Leicester struggled to gain possession and looked like the pressure of the occasion was affecting their play.

All the early pressure paid off in the eighth minute when Lingard linked well down the right-hand side with Valencia who still had a bit of work to do. He eventually delivered a teasing cross into the box that evaded Rashford’s head and fell nicely for Martial unmarked at the far post. The French striker had the relatively easiest of finishes to put the Reds in the lead and become his side’s leading scorer this season.

The home side almost added a second a few minutes later, following a deep cross from the left by Rojo that Fellaini did extremely well to control and lay the ball off to Lingard whose shot was saved well by Schmeichel.

Leicester pulled level in the sixteenth minute after a free kick was delivered invitingly into United’s box and there was Morgan to head home the equaliser. It was a goal totally against the run of play, but one that the United defence have to accept responsibility for.

United won a free kick right on the edge of the penalty area which Rooney elected to take but he fired his effort straight into the defensive wall. This season has been terrible for free kicks taken by United compared to past seasons with only a few that have found the back of the net.

The visitors had a chance to take the lead just before the half-hour when Schlupp lined up a shot which was brilliantly blocked by Valencia.

This was followed by a straight chase between Lingard and Simpson for a poor back pass that was eventually kicked clear by Schmeichel. Rooney complained to the ref that he thought Lingard was hauled down by Simpson, however, referee Oliver got the decision correct.

After the great start by United the half had evened out with Leicester more involved in the game and they started to create chances of their own and won a few corners and the odd penalty shout.

The home defence clearly hadn’t learnt from the goal they had conceded as Morgan was left free by Rojo to try another header which this time sailed over the bar, but the warning signs were there.

As half time approached either side could have taken the lead if not for poor finishing mixed with good defending.

The match was all square at the break after half that had started off so promisingly for United but had ended in a deflated manner. Leicester scored at exactly the right time to take the wind out of United’s sails and as usual, the Reds will rue not taking more chances when they were in total control.

The next forty-five minutes would be crucial for both sides. A draw is not what either side desire, especially United who desperately need the three points to keep any hope of a top four place alive.

Leicester started the second half on the front foot as they won an early corner that was headed goalward and was well saved by De Gea. Then Martial tried his luck at the other end with some nice footwork and a shot that just wouldn’t dip in time.

The action continued, this time with Leicester coming close to grabbing the lead when a cross come shot almost found its way to goal.

You could sense that Leicester knew this was a big chance for them to catch out an average United as they cranked up the gears. United needed a creative influence so Mata was introduced just before the hour mark to try and bring that component to the game. He replaced Lingard, who was on a booking.

Before the change Rooney tried a Cantona style chip to the far post from the edge of the area that almost crept in and would have made the watching French master smile.

Rooney wasn’t having a good game in his deeper role and this was summed up when he was cautioned for a foul on the touchline and vented his frustration towards the referee.

As the match entered the final twenty minutes De Gea was alert to a long range effort from Mahrez when he punched his shot away. At this point, Leicester were in the ascendancy and showed exactly why they sat at the pinnacle of the league.

United’s second substitution came when Herrera was brought on for Fellaini who had struggled to impose himself on the game and could be in trouble for yet another elbowing incident after an altercation with Huth.

Almost immediately Martial delivered a dangerous cross which was defended well by Morgan then Smalling saw his header hit the post after a Rooney cross. That was the closest United had come to taking the lead.

With ten minutes left on the clock you did feel that there was another goal in the game but who would it go to? Rooney had started to impose himself more and more on the game and Martial was a threat as ever. However, the visitors also had their chances.

The third and final throw of the dice by van Gaal was to take off Rashford and give yet another chance to Memphis.

There was drama in the last five minutes as Drinkwater brought down Memphis inches outside the penalty area and received his marching orders following a second yellow card. It looked like a stonewall penalty but referee Oliver was adamant it was outside.

Then United had two free kicks in quick succession. The first of which Rooney took that needed a smart save by Schmeichel at his near post. This was followed by a poor effort by Memphis, who used to fire in the same chances at PSV on a regular basis.

Full time and the match ended in a disappointing 1-1 draw which seriously dents United’s chances of Champions League qualification.

As the match progressed United lost the momentum they had built in the opening twenty minutes and only have themselves to blame for allowing a determined and organised Leicester back into the game.

Today was a case of two points dropped by United even though they hadn’t played poorly they did fail to capitalise on their bright start. With three games left they are relying on the results of City and Arsenal above them. Van Gaal said United needed to win their last four games to finish in the top four so, by his own admission, they’re facing an uphill battle now.

There’s still a chance with City and Arsenal playing each other next weekend. However, it’s going to be difficult, especially with tough trips to Norwich and West Ham ahead.

It makes for a very interesting end to another below par season for van Gaal and his side, who have once again let another game slip through their fingers, but credit to Leicester who only need one point or Spurs to falter against Chelsea and they will be crowned champions for the first time in their 132 year history. A truly amazing achievement indeed.