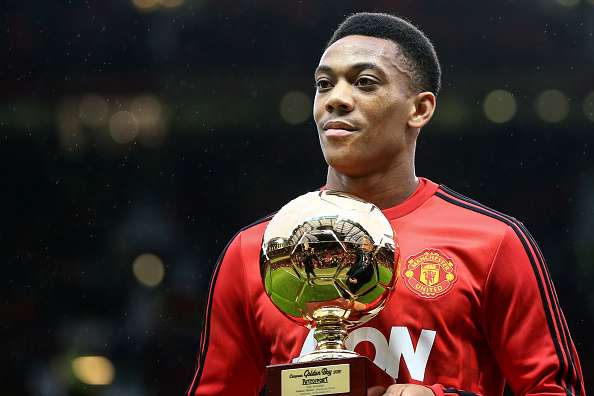 Anthony Martial – the Golden boy who can conquer the Premier League

Anthony Martial has scored 10 goals in the 2018/19 season and is on the joint-second place on Manchester United’s top scorer list.

The Frenchman has recently signed a contract extension, which would keep him in the club until 2024. He has played 162 games in Manchester United’s shirt, as he scored 46 goals and added 27 assists.

Martial has won the Golden boy award back in 2015 – given to the most talented youngster with an exciting football future ahead of him.

The 23-year old has had 104 Premier League games before the Leicester trip, and has a far better stats then Cristiano Ronaldo at same stage.

Martial has scored 32 Premier League goals, compared to Ronaldo’s 22 at his 104th game. He has also made 2 assists more than the Portuguese, which makes 48 (goals + assists) for Anthony Martial against 36 for Cristiano Ronaldo.

The Frenchman needs 145 minutes averagely to score or assists, while Ronaldo’s average at that stage was 196 minutes.

The manager, Ole Gunnar Solskjaer has challenged Anthony Martial to follow in Cristiano Ronaldo’s footsteps and to become one of the biggest stars in football.

It’s up to any player if you make a decision on how to develop your own career. Cristiano was the best at it, the way he’s changed since he came to United to now.

That’s got to be part of any player that you maybe model yourself on someone. You’ve got to have more challenges ahead of you because you cannot just rely on what you do now.

I’m here to guide players until the summer and when you sit him down and talk to him, for example, about Cristiano’s career, what he’s made of his career and how he’s got there, and we talk about all the fantastic players with the history they’ve got, I think Anthony just sat down and said ‘if I can be a part of this I’d like to’.

I believe, and the club believes, we have got a top player there. I think he can achieve a lot. I’ve not seen many players with the quick feet and the skills in the last third as he has, so we’re going to build his career and hopefully he’ll grab the chance with both hands.

Anthony Martial has had his ups and down as Manchester United player. He had some disagreements with the ex United manager, Jose Mourinho. The Frenchman was on the brink of leaving the club, as Mourinho couldn’t find place for him in the starting line-up.

With the appointment of Ole Gunnar Solskjaer, Martial got back his desire of playing football. He has had some outstanding performances in the previous month and has extended his contract until 2024.

We believe Tony can develop in a world class player and will lead Manchester United to many titles in England and Europe.