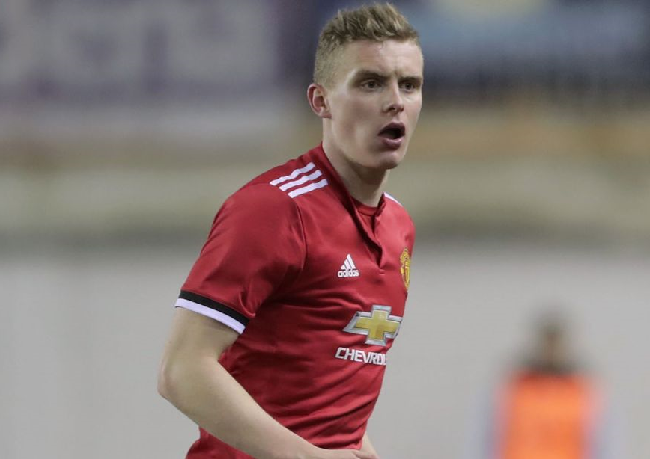 Ole Gunnar Solskjaer has not been afraid to give Manchester United youngsters the opportunity to shine this season, and that trend is likely to continue, should the Norwegian be given the position on a full-time basis. United are a club who have been synonymous with letting their younger players flourish over the past couple of decades, and the Red Devils currently have a number of exciting prospects in their squad. There are also a handful of academy graduates who have been sent out on loan and are currently making an impression further down the football pyramid. 20-year midfielder Ethan Hamilton has been thrown straight into a League One relegation battle but the Scot’s performances for Rochdale certainly point towards him having a bright future at Old Trafford.

📝 DEAL DONE: Manchester United’s Ethan Hamilton has joined Rochdale on loan for the remainder of the 2018/19 season. (Source: @officiallydale) pic.twitter.com/s4VYyHs32R

Many Manchester United loanees have failed to accrue sufficient game-time in recent months with Joel Pereira struggling to break into KV Kortrijk’s matchday-squad, whilst Callum Whealan has barely kicked a ball in Burslem. However, Ethan Hamilton’s spell at Spotland has been a largely successful one. As well as being praised for his busy midfield performances, his eye for the spectacular has helped him become an instant hit with Dale supporters.

With the club currently second favourites for relegation from the third tier with the bookmakers, Hamilton’s arrival has been one of the few success stories this campaign and, despite receiving a red card against league leaders Luton Town, he is still likely to play a crucial role in their quest for survival. Rochdale weren’t expected to trouble Mick Harford’s Championship-bound Hatters, who are odds-on shots to finish the campaign as champions and, unsurprisingly, Dale barely laid a glove on their high-flying opponents. However, the club do still have a number of must-win games against relegation rivals left to play, and they cannot afford any more slip-ups this season.

The League One relegation battle is fascinating with thirteen teams currently struggling to pull away from the drop zone. Rochdale are second favourites to slip into the fourth tier and can be backed at around 4/11. As of March 11th, Dale are just four points off safety, and they picked up a much-needed three points against relegation rivals Shrewsbury on March 9th. Bradford slipped to the foot of the table following a controversial defeat to Oxford at the weekend, and despite Gary Bowyer’s recent arrival, the Bantams are favourites for the drop at 1/5. AFC Wimbledon have given themselves a fighting chance courtesy of three successive victories, and the odds have swung in their favour as a result. The Dons were 1/14 shots a fortnight ago, but are now priced at 8/15 to avoid relegation to the fourth tier.

With around ten games left to play, there are likely to be plenty more twists and turns before the campaign concludes at the beginning of May, and it’s a great time for punters to unearth value in many of these promotion and relegation markets. Anyone who fancies one of the bigger priced teams such as Oxford or Scunthorpe to dragged back into the mire can use the latest free sports bets to predict which side will be playing League Two football next season. Despite having lost just three of their last fifteen games, Plymouth have yet to pull themselves clear of danger, and can be backed at 15/8 to return to the fourth tier.

Just read that Solskjær allowed the squad to have one alcoholic drink each on their flight back to Manchester. HALF THE SQUAD WE HAD AREN’T EVEN OLD ENOUGH TO LEGALLY DRINK! Can picture Mason and James Garner having an Orange J20 whilst playing Uno 😆 #MUFC pic.twitter.com/O7L8WXTmiH

Hamilton will be hoping to follow in the footsteps of the likes of James Garner and Mason Greenwood, who have both recently featured in the match-day squad.

The Scot has been at the club since 2015, and last season made his debut in the UEFA Youth League. His performances for the Under 18s have also caught the eye with eight goals and three assists in 22 appearances. His industrious style of play has endeared him to the Rochdale fans this season, and his ability to impact the game in both boxes is a terrific asset. He has been compared to former Red Devils midfielder Darren Fletcher, although he looks to have more of an eye for goal than his fellow countryman.

Hamilton will be hoping that he’s done enough during his loan spell to figure in Ole Gunnar Solskjaer’s plans for next season but, in the meantime, he must continue to help Rochdale fend off the threat of relegation to League Two.