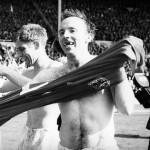 Calls by Manchester United fans for the club to buy some of Nobby Stiles’ football memorabilia put up for auction have been heeded when a World Cup and a European Cup medal were bought for more than £200,000 by United. A club spokeswoman  said Mr Stiles was a “club legend” and that the items were bought for the club’s museum. That decision raises a couple of interesting questions such as whether United also bought part of the collection recently auctioned by the family of George Best and if the Glazer family had any input in the decision.

The BBC reports that the World Cup medal which Stiles won in the 1966 final against West Germany was sold for £160,000. The 68 year old’s European Cup medal which he won with Manchester United in 1968 also went under the hammer fetching more than £49,000. Stiles made a total of £424,438 from the auction at the Royal Highland Centre in Edinburgh. 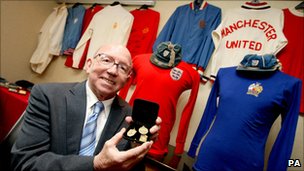 The collection included Stiles’s 1966 World Cup cap which went for more than £35,000. The blue Manchester United shirt he wore in the European Cup final against Benfica was sold for £30,582 while Alan Ball’s 1966 World Cup final shirt which Stiles acquired from his team mate as a swap after the match  fetched nearly £52,000.

Stiles, who suffered a stroke in June, said “It was always my intention to leave the entire collection to my children. But I have three sons – how do you fairly divide up this sort of collection between them? They have each selected some pieces they would like to keep for themselves.”

Son John said “If you had walked in to my dad’s house you would never have known what he had done. The shirts were in the loft and the medals were in the bank. Nobody ever saw them. So he was going to sell them sooner or later. But he was poorly in the summer and that speeded up the process.”

Do you agree with the practice of United buying such memorabilia for the club museum?