New Liverpool manager Kenny Dalglish came to Old Trafford, saw, then went home vanquished and out of the FA Cup. The desperately hoped for turn of fortunes for the beleaguered club never materialised as the new ‘messiah’ saw his side defeated with a second minute Ryan Giggs penalty, followed by a red card to captain Steven Gerrard just after the half hour. Manchester United now goes forward to visit  Southampton in the fourth round while Liverpool realistically only has the Europa League to play for during the rest of the season.

For Sir Alex Ferguson, it was a matter of ‘Mission Accomplished’ saying that “It is amazing it was only 1-0 but sometimes, when a team is down to 10 men, you get that kind of resilient attitude. We should have put it to bed in the second half and it could have been three or four. But anything can happen at 1-0. The FA Cup is riddled with it. Fortunately, we didn’t do anything stupid today that would have caused us embarrassment.” 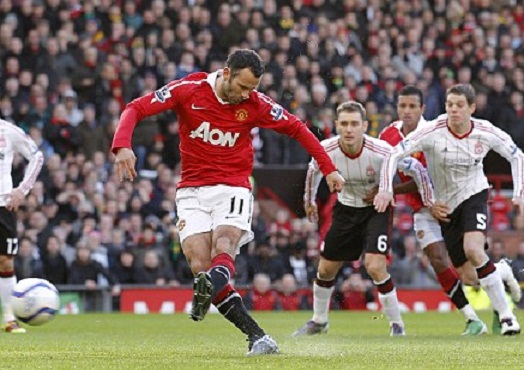 The Guardian – Defeat to Manchester United will never be met with a shrug from Liverpool, but they need not be in despair over this result in the FA Cup third round. With Kenny Dalglish in charge after the dismissal of Roy Hodgson, they persevered despite a sending off for the captain Steven Gerrard in the first half. Jonny Evans almost added to the Ryan Giggs penalty, but his header came back off a post on the verge of the interval.

Given the woe this season, it was natural that Dalglish should think of turning back the clock and the lineup was almost entirely composed of players who were on the books before the appointment of Hodgson. The difference, even so, was not dramatic and the opening to the match left them just as beleaguered as they had been of late. The match had barely begun when Daniel Agger made a needless challenge on Dimitar Berbatov near the corner of penalty area and byline. There was a pause before the Bulgarian fell to earth, but an offence had been committed. Full Report

Liverpool Echo – Kenny Dalglish failed to get the dream start he was looking for as Manchester United ensured his second stint as the new Liverpool boss began with an FA Cup defeat at Old Trafford. Dalglish arrived from Dubai last night after accepting the challenge of reviving the Merseysiders’ fortunes, which have plummeted dramatically in recent times, culminating in Roy Hodgson’s dismissal yesterday. And he certainly brought more conviction to his players and Liverpool’s supporters.

It will take rather more to create a winning team though, and while Dalglish can take heart from the way his side battled back following Ryan Giggs’ controversial second-minute penalty and the dismissal of captain Steven Gerrard for a nasty first-half challenge on Michael Carrick, the Scot knows there is so much work to do. Still, his name brings hope, even if time has moved on since February 22, 1991, when Dalglish resigned in the wake of an epic 4-4 draw with Everton. Full Report

Manchester Evening News – Manchester United dumped 10-man Liverpool out of the FA Cup thanks to a controversial early penalty from Ryan Giggs. With just 31 seconds on the clock, referee Howard Webb pointed to the spot after Daniel Agger’s challenge on Dimitar Berbatov in what looked like a generous award. But Giggs was in no mood to take pity on the Reds’ arch rivals, blasting home a clinical spot-kick past Pepe Reina.

Matters got worse for new Liverpool boss Kenny Dalglish when his skipper Steven Gerrard received a straight red for a two-footed lunge at Michael Carrick after just 32 minutes. United were in control of the game for the most part, and although Liverpool showed spirit after the break, Sir Alex Ferguson’s men progressed to the fourth round where they will face a trip to Southampton. Full Report

3 thoughts on “Dalglish fails to deliver as United KO's Liverpool”