The boss is fighting mad, his Manchester United side is facing a backs to the wall fight to regain the title. And nobody does siege mentality better than the Sir Alex Ferguson. It doesn’t matter who has upset him, whether it be the authorities, the media, fans, referees or fellow managers, when it comes to the crunch and United are under threat, the blockade is put in place. Former United defender Gary Pallister played under Sir Alex for 9 years winning four titles and three FA Cups. He told M.E.N’s Stuart Mathieson “I saw it for the first time in 1990”

“We were really getting it in the neck at the time. We were subjected to some bad flak. I had been an expensive purchase at the start of that season along with Paul Ince, Danny Wallace and Neil Webb” he remembers “we were all under the spotlight and the media were on our backs. They were giving the manager a hard time too and claiming his job was on the line” 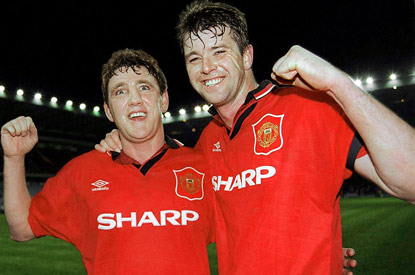 “It was a tough time but Fergie responded the way he is doing now. Before we played Nottingham Forest in that crucial third round FA Cup match at the City Ground there was a ban on doing radio interviews and the press. It was about blocking everything off and concentrating the mind. It became an all for one, one for all situation. It was the Three Musketeers syndrome.” he said

“Ferguson made us realise we were all in it together. There is always a certain siege mentality that has to go on in a dressing room because it is always about yourselves as a team” he explained “but there are certain times when he ups that. The manager told us in the run up to that Forest match that you cannot let outside influences rule the roost.”

“It is not about what the press think, it was about trusting in each other. He used to say it is not about what others think or write – it is about us all as players sticking together. He impressed on us that you had to have faith in those players around you. He did make a thing about it being the world against us and you did believe it and hit back with a ‘we’ll show ‘em’ attitude.”

Looking ahead, Pallister has no doubt that Sir Alex can steady the ship “I am sure the manager will get the necessary response against Arsenal in the FA Cup. That’s a massive game because not only is progress in the Cup up for grabs it is also a chance for someone to put down a big marker ahead of the Premier League crunch at the Emirates on May 1. No matter Chelsea’s recent recovery and City being up there, I still think it is between United and Arsenal so that clash in London is a key one.”

Pallister believes the media backlash has been way over the top. “I think people are getting carried away” he said “away matches at Stamford Bridge and Anfield were always going to be tough. It is just unfortunate for United that they have come consecutively. The Chelsea result could have been different because United played well. Liverpool have been galvanised by Kenny Dalglish and he was always going to get a reaction for a game like last Sunday.

The former defender know his former boss well, he’s fully aware that the word ‘surrender’ does not exist in Ferguson’s vocabulary which leaves Pallister with no doubt that once the dust has settled, United will be celebrating a record breaking title.

Will Fergusons experience see his team regroup once again?